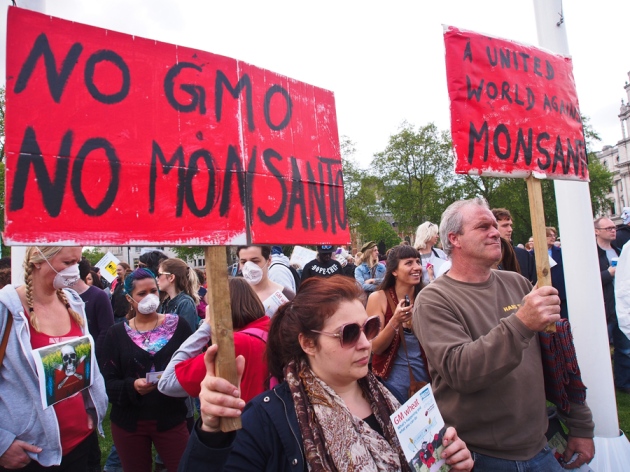 Hostility towards the cultivation of transgenic crops in Europe has prompted vociferous protests.

European researchers have expressed regret but little surprise at last week’s announcement by the agriculture giant Monsanto that it will no longer be seeking approvals for genetically modified (GM) crops now under review for cultivation in the European Union (EU).

As anti-GM campaigners celebrated, advocates warned that Europe risks becoming a scientific backwater as the rest of the world increasingly adopts the technology. “It’s bad news for Europe, for European farmers and for global food security,” says Jonathan Jones, who uses both GM and conventional approaches to study disease resistance in plants at the Sainsbury Laboratory in Norwich, UK. “Europe has to get its act together.”

The approval process for GM crops has ground to a halt in Europe despite a clear regulatory path. Crops must first be deemed safe by the European Food Safety Authority (EFSA) in Parma, Italy. The European Commission must then produce a draft decision within three months, to be voted on by representatives from EU member states before approval can be finalized.

The EFSA has deemed eight crops as safe, some as long ago as 2005. But political disquiet over the cultivation of GM crops, including bans in some EU countries, has meant that the commission has not moved forward on any of them.

Four crops in limbo — three varieties of maize (corn) and one of soya bean — are Monsanto products. The company, which is based in St Louis, Missouri, also has five GM crops still under review by the EFSA: four maize varieties and one sugar-beet variety. Monsanto says that it will abandon applications for all of them except for one GM maize, MON810. This is already grown in the EU, but is now up for its ten-year re­approval review. That reapproval has already been passed to the commission by the EFSA.

Monsanto will now focus its European efforts on its conventional agriculture business and on enabling the import of GM crops for use as animal feed, a widespread EU practice that is less controversial than cultivating the crops in European fields.

MON810, which is modified to produce a protein called Bt that is harmful to insect pests, is one of only two GM crops approved for cultivation in the EU. The other is a high-starch GM potato called Amflora that is intended for industrial applications such as paper production. But in 2012, its makers, BASF Plant Science in Limburgerhof, Germany, announced that, because of hostility to GM products in Europe, it would abandon development and sale of Amflora and move its base to the United States. The company also later said that it will not pursue EU approvals for other GM potatoes.

EFSA applications for four GM maize varieties from other companies are still pending — two from DuPont Pioneer, based in Johnston, Iowa, and two from Syngenta in Basel, Switzerland. Pioneer says that it will continue with its approvals, and Syngenta says that its position is also unchanged.

Maurice Moloney, director of Rothamsted Research, an agricultural-research centre in Harpenden, UK, says that the Monsanto move is a “perfectly reasonable business decision”, given the current political climate. Although he expects that Europe will eventually come round politically, for now, even small-scale field trials can attract vociferous protests. Increasingly, researchers are looking for the chance to do their work in more accepting countries in the Far East, Africa and Latin America, says Denis Murphy, a plant biotechnologist at the University of South Wales near Pontypridd, UK. “I do a lot of my work now overseas,” he says. “I’ve almost given up on Europe.”