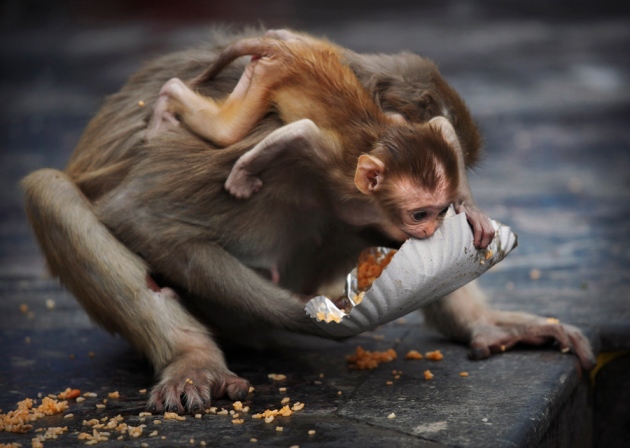 Rhesus macaques that eat what they like age more quickly.

Monkeys on a reduced-calorie diet live longer than those that can eat as much as they want, a new study suggests. The findings add to a thread of studies on how a restricted diet prolongs life in a range of species, but they complicate the debate over whether the research applies to animals closely related to humans.

In the study, which has been running since 1989 at the Wisconsin National Primate Research Center in Madison, 38 rhesus macaques (Macaca mulatta) that were allowed to eat whatever they wanted were nearly twice as likely to die at any age than were 38 monkeys whose calorie intakes were cut by 30%1. The same study reported2 in 2009 that calorie-restricted monkeys were less likely to die of age-related causes than control monkeys, but had similar overall mortality rates at all ages.

“We set out to test the hypothesis: would calorie restriction delay ageing? And I think we've shown that it does,” says Rozalyn Anderson, a biochemist at the University of Wisconsin who led the study, which is published today in Nature Communications. She said it is not surprising that the 2009 paper did not find that the calorie-restricted monkeys lived longer, because at the time too few monkeys had died to prove the point.

Eating a very low-calorie diet has been shown3 to prolong the lives of mice, leading to speculation that such a diet triggers a biochemical pathway that promotes survival. But what that pathway might be — and whether humans have it — has been a matter of hot debate.

In 2012, a study at the US National Institute on Aging (NIA) in Bethesda, Maryland, cast doubt on the idea, reporting4 that monkeys on low-calorie diets did not live longer than those that ate more food. But Anderson says that the Wisconsin findings are good news.

“The publication of the 2012 paper created such consternation,” Anderson recalls. But her team's results show that “absolutely, calorie restriction does work”, she adds. ”I have no doubt the results will be relevant to how we're treating people in geriatric clinics ten years from now.”

The leaders of the NIA study, however, are taking a more cautious approach.

“Are we seeing health benefits? Yes, but I don’t know that we're necessarily seeing survival benefits,” says Julie Mattison, a physiologist at the NIA. “I think what we're arriving at is that the effects of calorie restriction on survival are very dependent on genetics, the environment and the effect on body weight, and probably the diet that you give the animals.”

Two key factors — the composition of the diet and the feeding regimen — could account for the different results. The Wisconsin monkeys are fed purified pellets that consist of almost 30% sugar, whereas the NIA monkeys' diets contain more whole grains and only 4% sugar. The Wisconsin study also let all its monkeys eat what they liked at first, then reduced calorie intake by 30% in some of the animals, so the amount of calories eaten varied within the control and calorie-restricted groups. The NIA study, by contrast, fed all control animals a fixed amount of calories based on their ages and body weights, and fed all calorie-restricted animals 30% less than that.

Perhaps as a result, the animals in the Wisconsin study were heavier overall than the national average for captive monkeys, whereas the NIA animals were lighter than average. The two studies may actually be looking at different types of conditions: reducing the weight of an overweight monkey to within normal range in the Wisconsin study, versus reducing the weight of a healthy monkey but keeping it in a healthy range in the NIA study.

But, says Mattison, the Wisconsin calorie-restricted monkeys may have lived longer than the control group simply because they suffered fewer conditions associated with excess weight, such as diabetes, rather than because they gained some unique biochemical benefit from eating less.

“If you take an animal that's eating a whole bunch of sugar and cut out 30% of those calories, it's not surprising that they do a bit better, whereas we're taking an animal eating very healthy food and cutting back and not getting the same robust effect,” says Mattison.

The two groups have begun to analyse their data together, in the hope of picking apart the influences of weight, genetics, diet composition, calorie count, and other aspects of the animals' environments. In the meantime, Mattison says, it is simply not possible to say with certainty what the monkey studies mean for human lifespans.

“It's too early for people to decide to do this or that based on these results, when we're really using the lab studies as a tool to understand the mechanisms of aging,” she says.