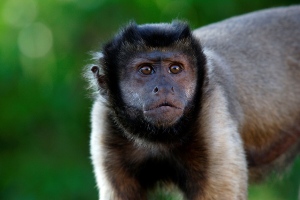 After watching humans interact, capuchin monkeys similar to this French Guiana male tended to shun persons who had acted selfishly.

When does a monkey turn down a free treat? When it is offered by a selfish person, apparently.

Given the choice between accepting goodies from helpful, neutral or unhelpful people, capuchin monkeys (Cebus apella) tend to avoid individuals who refuse aid to others, according to a study published today in Nature Communications1.

“Humans can build up an impression about somebody just based on what we see,” says author James Anderson, a comparative psychologist at the University of Stirling, UK. The capuchin results suggest that this skill “probably extends to other species”, he says.

Anderson chose to study capuchins because of their highly social and cooperative instincts. Monkeys in the study watched as a person either agreed or refused to help another person to open a jar containing a toy. Afterwards, both people offered a food pellet to the animal. The monkey was allowed to accept food from only one.

When help was given, the capuchins showed little preference between the person requesting help and the one providing aid. But when help was denied, the seven monkeys tended to accept food less often from the unhelpful person than from the requester.

To try to understand the monkeys’ motivations, Anderson and his team tested different scenarios. The animals showed no bias against people who failed to help because they were busy opening their own jar. But they tended to avoid people who were available to help but did not do so.

“Explicit refusal to help is a signal that you’re dangerous, that you’re negative,” says Kiley Hamlin, a developmental psychologist at the University of British Columbia in Vancouver, Canada. Similar biases have been shown in chimpanzees2 and in 3-month-old humans3. Hamlin says that the capuchin study suggests that being able to identify undesirable social partners has ancient evolutionary roots.

Sarah Brosnan, an ethologist at Georgia State University in Atlanta, says that this type of study is usually done with great apes and “it’s really interesting to see this in a monkey”. The findings suggest that social inference may occur in animals that vary widely in brain size and cognitive ability, she explains.

But Jennifer Vonk, a comparative psychologist at Oakland University in Rochester, Michigan, and an author of the chimpanzee study, cautions against assuming that the monkeys understand much about human character.

“You really don’t know what they’re inferring,” she says. In conditions in which both people were given jars, the biases against unhelpful people were weaker, she explains, so stronger tests are needed to rule out possible preferences of the monkeys for people who control objects of interest, such as toys.

Still, Vonk says that she is interested in seeing whether other social animals — dogs, for instance — and even non-social species, such as bears, guide their behaviour by watching social interactions.