A vaccine against a monkey virus could offer clues to defeating HIV. Scientists have created a vaccine that protects rhesus monkeys from infection with a potent form of the simian immunodeficiency virus (SIV), which is distantly related to the virus that causes AIDS in humans.

SIV vaccines have been successful before, but the protective effects have proved difficult to carry over to HIV. Scientists are hopeful that the latest results, which appear online in Nature today1, can be combined with findings from a modestly successful vaccine trial in humans2 to point the way to an effective HIV vaccine. 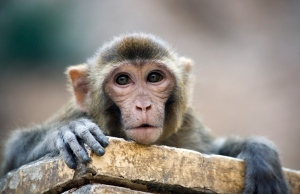 A vaccine cut chances of contracting simian immunodeficiency virus by 80% in rhesus monkeys.

“To me, if it’s possible in monkeys it’s got to be possible in humans,” says Bruce Walker, a virologist at the Ragon Institute of MGH, MIT and Harvard in Boston, Massachusetts, who was not involved in the study.

Because HIV does not cause disease in monkeys, SIV is the best model for evaluating vaccines before they are tested in humans, says Dan Barouch, a virologist at Beth Israel Deaconess Medical Center in Boston and the lead author of the latest paper. In the past, SIV vaccines have protected macaque monkeys from only the SIV strains used to make the virus, or from strains that are easy to kill, says Barouch.

His team treated groups of rhesus monkeys (Macaca mulatta) with several different two-stage vaccines, made up of a 'prime' virus genetically engineered to contain SIV genes, followed half a year later by a 'boost' consisting of another virus expressing the same genes. Six months after the boost, Barouch’s team infected monkeys with a strain of SIV that differed from the vaccine strain, and against which monkeys have trouble mounting a strong immune response.

A vaccine made of an adenovirus prime and a modified-pox-virus boost was best at stopping infection. Three-quarters of the monkeys that received no vaccine developed SIV after one exposure, whereas only 12% of the animals that got the best vaccine did so.

Barouch’s team continued to expose monkeys to SIV at one-week intervals, and most vaccinated animals eventually contracted the virus. But the researchers calculate that the best vaccine reduced an animal’s chances of contracting SIV after a single exposure by more than 80%.

In search of an explanation for the vaccine’s success, the researchers analysed dozens of characteristics of the monkeys' immune responses. The animals that produced high levels of antibodies that attach to the 'envelope' protein that surrounds the virus were most impervious to infection. Different immune responses against the envelope and another SIV protein called Gag were found in animals that developed infection but kept the virus at low levels.

Other groups hoping to develop HIV vaccines will pay close attention to the findings. “They give us a blueprint for how we should move forward in vaccines to test and what kinds of responses we hope they’ll induce,” says Barouch.

Some of those immune responses were also seen in the only HIV vaccine trial so far that has protected humans from infection, he notes. Researchers leading the RV144 trial (also known as the Thai trial) reported in 20092 that their combination vaccine reduced the odds of contracting HIV by about 30%. Trial subjects who did not contract HIV also tended to produce the highest levels of antibodies against HIV’s envelope protein (see 'Clues emerge to explain first successful HIV vaccine trial').

Follow-ups to the RV144 trial are in the works, and Walker’s team is raising money for a South African trial of an HIV vaccine equivalent to Barouch’s SIV vaccine. “I think we need to make multiple shots on goal over the next few years,” says Walker.

Robin Weiss, a virologist at University College London, calls the study "an interesting advance," but he would like to see proof that the SIV vaccines protect against more than one SIV strain..

Anthony Fauci, director of the US National Institute of Allergy and Infectious Diseases in Bethesda, Maryland, says that the SIV study should be taken with “a grain of salt” because it was done in animals, not humans. But its results, when combined with those of the RV144 trial and other studies suggesting that some people can mount a vigorous immune response to HIV3, 4, give reason for optimism. “People generally feel we’re going in the right direction,” says Fauci.