Monkeys that get shunted to the bottom of the social pecking order experience changes in the activity of their genes that may leave them in worse health and more vulnerable to disease.

The findings of a study published this week in the Proceedings of the National Academy of Sciences1, could help to explain why low socioeconomic or professional status is associated with poor health in humans, say researchers. 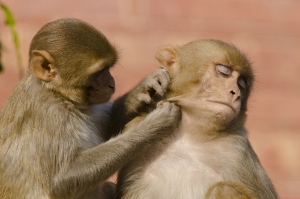 Grooming is one way in which rhesus macaques show deference and curry favour.

Jenny Tung, a geneticist at Duke University in Durham, North Carolina, and her colleagues studied 49 captive female rhesus macaques (Macaca mulatta). At the start of the study, all the animals had a medium social rank, judged by the access they got to food, water and grooming.

The researchers divided the monkeys into ten new groups, where their social ranks changed. Typically, the first animal assigned to a group had the highest ranking and the last the lowest, which meant that its social stress increased, as it experienced more bullying and found it harder to get resources.

Tung and her colleagues analysed blood samples from the monkeys for differences in gene expression. Of the 6,097 genes tested, 987 showed significant changes in expression level, associated with rank. The researchers could predict whether an animal was high, middle or low ranking with 80% accuracy, on the basis of gene expression alone.

Increased activity in immune-system genes, particularly those related to inflammation, was twice as common among low-ranking monkeys as would be expected by chance.

An overactive immune system creates “wear and tear” on the body, potentially heightening susceptibility to disease, says Tung. “That heightened state is more damaging” to be in, she says, although the study did not look at the monkeys' health.

The changes did not seem permanent. Analysing samples from seven monkeys that changed rank a second time when other animals entered the group showed that their gene expression responded rapidly, and predictably, to match their new status. “It suggests a lot of plasticity in our gene-expression response to our social environment, which is an optimistic note,” says Tung.

It was already known that social status can change which genes get turned on and off in insects and fish, but this is the first study to look at non-human primates, says Tung.

Research has also shown the health consequences of low social status on both animals and humans. One investigation, known as the Whitehall study2, found that low-ranking British civil servants suffer higher rates of illness and death than their superiors.

The results of the macaque study are “potentially highly relevant” to humans because they confirm that health depends on social status, and not vice versa, says Michael Marmot, an epidemiologist at University College London, who led the Whitehall study. “Clearly, changing ranks leads to changes in gene expression and not the other way around,” he says.

The macaque study suggests potential mechanisms for the Whitehall study's findings, Marmot adds. The link between genes and social status may be more difficult to tease out in humans than in monkeys, says Tung, owing to the greater complexity of our society.

The monkey experiment is an “important study”, says Dario Maestripieri, a behavioural biologist at the University of Chicago, Illinois. But, he adds, researchers should replicate the experiment using bigger groups that include males, to see if the effect is seen in a more natural social situation.

Tung is now planning an extended study, and is hoping to examine how social rank affects the macaques' susceptibility to infection.