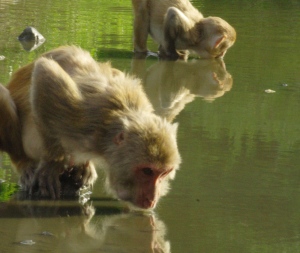 Monkeys can be kind to their neighbours — and they have a specific brain region which appears to record their good deeds.

Monkeys might not be known for their generosity, but when they do seem to act selflessly, a specific area in their brains keeps track of these kindnesses.

The discovery of this neuronal tally chart may help scientists to understand the neural mechanisms underlying normal social behaviour in primates and humans, and might even provide insight into disorders such as autism, in which social processing is disrupted.

Steve Chang and his colleagues from Duke University in Durham, North Carolina, used electrodes to directly record neuronal activity in three areas of the brain prefrontal cortex that are known to be involved in social decision-making, while monkeys performed reward-related tasks.

When given the option either to drink juice from a tube themselves or to give the juice away to a neighbour, the test monkeys would mostly keep the drink. But when the choice was between giving the juice to the neighbour or neither monkey receiving it, the choosing monkey would frequently opt to give the drink to the other monkey.

The researchers found that in two out of the three brain areas being recorded, neurons fired in the presence or absence of the juice reward only. By contrast, the third area — known as the anterior cingulate gyrus — responded only when the monkey allocated the juice to the neighbour and observed it being received. The authors suggest the neurons in the ACG respond to and record the act simultaneously. The study's results are published today in Nature Neuroscience1.

“This is the first time that we have had quite such a complete picture of the neuronal activity underlying a key aspect of social cognition. It is definitely a major achievement,” says Matthew Rushworth, a neuroscientist at the University of Oxford, UK.

The anterior cingulate gyrus is known to be a region that is specialized for social decision-making in primates, and it is located in the same area of the brain as that associated with the generation of feelings of empathy in humans.

“The great complexity of human social interactions and the huge variation in what we find rewarding compared with other primates prompts questions about whether the anterior cingulate gyrus operates similarly in the human brain,” Matthew Apps and Narender Ramnani, who work on neuroimaging and human cognition at Royal Holloway, University of London, UK, told Nature in an email.

Through the development of a specific part of the brain that experiences the reward of others, social decisions and empathy-like processes may have been favoured during evolution in primates to allow altruistic behaviour. “This may have evolved originally to promote being nice to family, since they share genes, and later friends, for reciprocal benefits,” says Michael Platt, a neuroscientist from Duke University who is a co-author of the paper.

The authors suggest that the intricate balance between the signalling of neurons in these three brain regions may be crucial for normal social behaviour in humans, and that disruption may contribute to various psychiatric conditions, including autistic spectrum disorders.