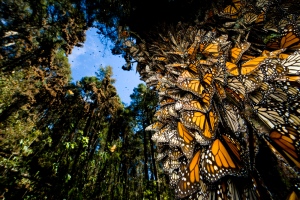 Monarch butterflies that migrate every year from the United States and Canada to Mexico use the Sun to orient themselves, but no inner 'map sense'. Pictured is a wintering site in Sierra Chincua.

Every autumn, millions of monarch butterflies (Danaus plexippus) converge on a small cluster of Mexican mountains to spend the winter. They have journeyed for up to 4,000 kilometres from breeding grounds across eastern North America. And according to a study, they accomplish this prodigious migration without ever knowing where they are relative to their destination.

The monarchs can use the position of the Sun as a compass, but when Henrik Mouritsen, a biologist at the University of Oldenburg in Germany, displaced them by 2,500 kilometres, he found that they did not correct their heading. “People seemed to assume that they had some kind of a map that allowed them to narrow in on a site a few kilometres across after travelling several thousands of kilometres,” he says. Now, “it is clear that they don’t”. His results are published in the Proceedings of the National Academy of Sciences1.

For more than five decades, scientists have teamed up with amateurs to tag and monitor free-flying monarchs, creating a database of their migrations. When Mouritsen analysed these records, he realized that the monarchs tend to spread out over the course of their migration. Their distribution was a good fit with the predictions of a mathematical model that assumed that the monarchs were flying with just a compass, rather than a compass and a map.

Mouritsen also captured 76 southwesterly flying monarchs from fields near Guelph in Ontario, Canada, and transported them 2,500 kilometres to the west, to Calgary in the Canadian province of Alberta. He placed the butterflies in a “flight simulator” — a plastic cylinder that kept them from seeing any landmarks except the sky — and tethered them to a rod that let them point in any direction without actually flying away.

On average, the transported insects still flew southwest, even though they would need to head south-southeast from Calgary to hit their wintering grounds. “There is absolutely no sign of any map use,” says Mouritsen.

Instead, he thinks that geography saves the day. The monarchs are reticent to cross tall mountains or open water, so even without a map, the Rocky Mountains to the west of their migration route and the Gulf of Mexico to the south funnel them to their destination. Once they approach the right general area, they may rely on smell or social cues to guide them to their exact wintering sites.

But Karen Oberhauser, an ecologist at the University of Minnesota in St Paul, questions both lines of evidence presented in Mouritsen's study. She says that the team should have compared the monarchs’ distributions with the predictions of a compass-and-map model as well as with those of a compass-only model. “Science proceeds by rejecting hypotheses that do not explain the data, not by corroborating preferred hypotheses,” she says.

Oberhauser adds that Mouritsen moved the monarchs well outside their normal range, into situations to which they would never have been exposed naturally. “This is not a fair test of a true navigation strategy.”

But Mouritsen counters that a compass-and-map model would have to make too many assumptions about how good the monarchs are at correcting their orientation, and when they would start to do so. “One thing is for sure: If they used a map to correct their orientation, they should be much more concentrated than if they used a compass program only,” he says.

Steven Reppert, a neurobiologist at the University of Massachusetts Medical School in Worcester, agrees that although the displacement experiment is interesting, it is inconclusive. “Studies of displacements at multiple distances and at multiple locations are needed before we can say with any confidence that eastern monarchs are not true navigators,” he says.