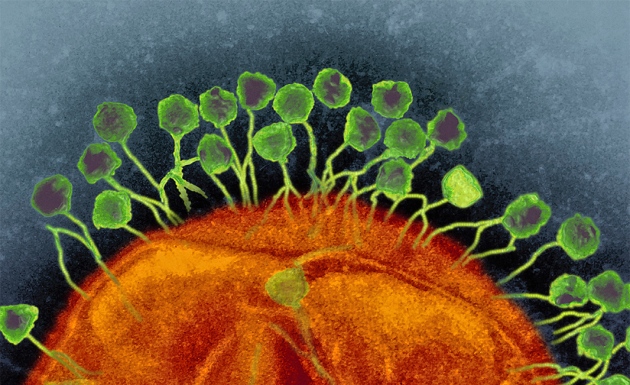 Phages (green) attack a bacterium (orange). Researchers are hoping to use engineered versions of these viruses to fight antibiotic resistance.

Genetically modified viruses that cause bacteria to kill themselves could be the next step in combating antibiotic-resistant infections.

Several companies have engineered such viruses, called bacteriophages, to use the CRISPR gene-editing system to kill specific bacteria, according to a presentation at the CRISPR 2017 conference in Big Sky, Montana, last week. These companies could begin clinical trials of therapies as soon as next year.

Initial tests have saved mice from antibiotic-resistant infections that would otherwise have killed them, said Rodolphe Barrangou, chief scientific officer of Locus Biosciences in Research Triangle Park, North Carolina, at the conference.

Bacteriophages isolated and purified from the wild have long been used to treat infections in people, particularly in Eastern Europe. These viruses infect only specific species or strains of bacteria, so they have less of an impact on the human body’s natural microbial community, or microbiome, than antibiotics do. They are also generally thought to be very safe for use in people.

But the development of phage therapy has been slow, in part because these viruses are naturally occurring and so cannot be patented. Bacteria can also quickly evolve resistance to natural phages, meaning researchers would have to constantly isolate new ones capable of defeating the same bacterial strain or species. And it would be difficult for regulatory agencies to continually approve each new treatment.

To avoid these issues, Locus and several other companies are developing phages that turn the bacterial immune system known as CRISPR against itself. In Locus' phages, which target bacteria resistant to antibiotics, the CRISPR system includes DNA with instructions for modified guide RNAs that home in on part of an antibiotic-resistance gene. Once the phage infects a bacterium, the guide RNA latches on to the resistance gene. That prompts an enzyme called Cas3, which the bacterium normally produces to kill phages, to destroy that genetic sequence instead. Cas3 eventually destroys all the DNA, killing the bacterium. “I see some irony now in using phages to kill bacteria,” says Barrangou.

Another company, Eligo Bioscience in Paris, uses a similar approach. It has removed all the genetic instructions that allow phages to replicate, and inserted DNA that encodes guide RNAs and the bacterial enzyme Cas9. Cas9 cuts the bacterium’s DNA at a designated spot, and the break triggers the bacterium to self-destruct. The system will target human gut pathogens, says Eligo chief executive Xavier Duportet, although he declined to specify which ones.

The two companies hope to start clinical trials in 18–24 months. Their first goal is to treat bacterial infections that cause severe disease. But eventually, they want to develop phages that let them precisely engineer the human microbiome by removing naturally occurring bacteria associated with conditions such as obesity, autism and some cancers.

Both Barrangou and Duportet acknowledge that for now, causal links between the human microbiome and these conditions are tenuous at best. But they hope that by the time their therapies have been proved safe and effective in humans, the links will be better understood. Phages could also allow researchers to manipulate the microbiomes of experimental animals, which could help them to untangle how certain bacteria influence conditions such as autism, says Timothy Lu, a synthetic biologist at the Massachusetts Institute of Technology in Cambridge and a co-founder of Eligo.

Other companies are working to get phages to perform different tasks. ‘Supercharged’ phages, created by a group at Synthetic Genomics in La Jolla, California, could contain dozens of special features, including enzymes that break down biofilms or proteins that help to hide the phages from the human immune system.

But engineered phages still have to overcome some hurdles. Treating an infection might require a large volume of phages, says Elizabeth Kutter, a microbiologist at Evergreen State College in Olympia, Washington, and it’s unclear whether this would trigger immune reactions, some of which could interfere with the treatment. Phages could also potentially transfer antibiotic-resistance genes to non-resistant bacteria, she notes.

Lu adds that bacteria may still develop resistance even to the engineered phages. So researchers might have to frequently modify their phages to keep up with bacterial mutations.

But as antibiotic resistance spreads, Kutter says, there will be plenty of space for both engineered phages and natural phage therapies, which are also growing in popularity. “I think they’ll complement the things that can be done by natural phages that have been engineered for hundreds of thousands of years,” she says.

This article originally stated that phages engineered by Synthetic Genomics suppressed the human immune system. Instead, the phages are able to hide themselves from the immune system. The story has been corrected to reflect this.