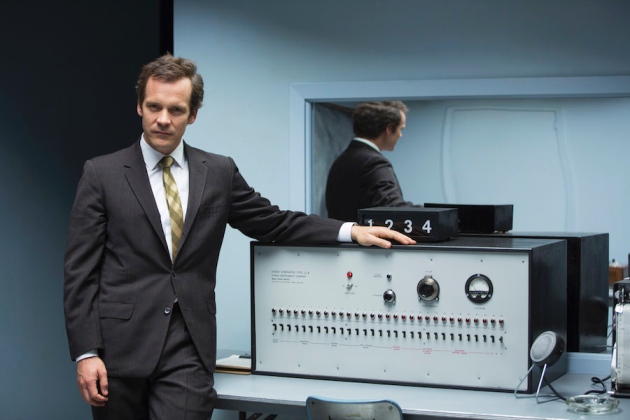 More than 50 years after a controversial psychologist shocked the world with studies that revealed people’s willingness to harm others on order, a team of cognitive scientists has carried out an updated version of the iconic ‘Milgram experiments’.

Their findings may offer some explanation for Stanley Milgram's uncomfortable revelations: when following commands, they say, people genuinely feel less responsibility for their actions — whether they are told to do something evil or benign.

“If others can replicate this, then it is giving us a big message,” says neuroethicist Walter Sinnot-Armstrong of Duke University in Durham, North Carolina, who was not involved in the work. “It may be the beginning of an insight into why people can harm others if coerced: they don’t see it as their own action.”

The study may feed into a long-running legal debate about the balance of personal responsibility between someone acting under instruction and their instructor, says Patrick Haggard, a cognitive neuroscientist at University College London, who led the work, published on 18 February in Current Biology1.

Milgram’s original experiments were motivated by the trial of Nazi Adolf Eichmann, who famously argued that he was ‘just following orders’ when he sent Jews to their deaths. The new findings don’t legitimize harmful actions, Haggard emphasizes, but they do suggest that the ‘only obeying orders’ excuse betrays a deeper truth about how a person feels when acting under command.

In a series of experiments at Yale University in New Haven, Connecticut, in the 1960s, Milgram told his participants that a man was being trained to learn word pairs in a neighbouring room. The participants had to press a button to deliver an electric shock of escalating strength to the learner when he made an error; when they did so, they heard his cries of pain. In reality, the learner was an actor, and no shock was ever delivered. Milgram’s aim was to see how far people would go when they were ordered to step up the voltage.

Routinely, an alarming two-thirds of participants continued to step up shocks, even after the learner was apparently rendered unconscious. But Milgram did not assess his participants’ subjective feelings as they were coerced into doing something unpleasant. And his experiments have been criticized for the deception that they involved — not just because participants may have been traumatized, but also because some may have guessed that the pain wasn’t real.

Modern teams have conducted partial and less ethically complicated replications of Milgram’s work. But Haggard and his colleagues wanted to find out what participants were feeling. They designed a study in which volunteers knowingly inflicted real pain on each other, and were completely aware of the experiment’s aims. 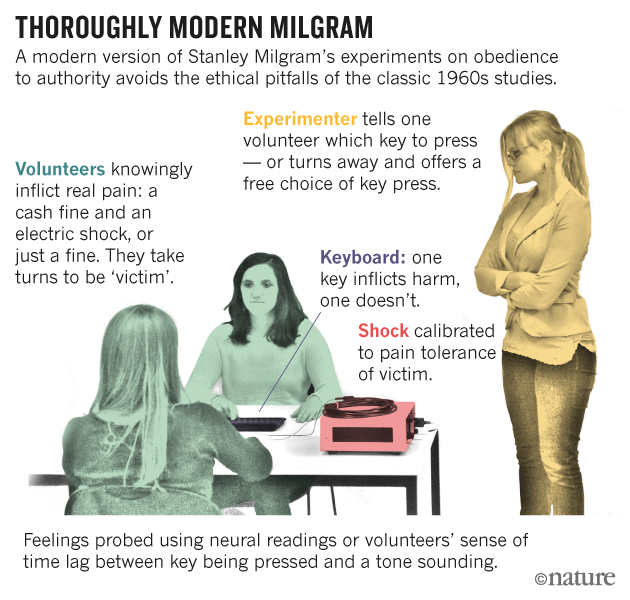 Because Milgram’s experiments were so controversial, Haggard says that he took “quite a deep breath before deciding to do the study”. But he says that the question of who bears personal responsibility is so important to the rule of law that he thought it was “worth trying to do some good experiments to get to the heart of the matter.”

In his experiments, the volunteers (all were female, as were the experimenters, to avoid gender effects) were given £20 (US$29). In pairs, they sat facing each other across a table, with a keyboard between them. A participant designated the ‘agent’ could press one of two keys; one did nothing. But for some pairs, the other key would transfer 5p to the agent from the other participant, designated the ‘victim’; for others, the key would also deliver a painful but bearable electric shock to the victim’s arm. (Because people have different tolerances to pain, the level of the electric shock was determined for each individual before the experiment began.) In one experiment, an experimenter stood next to the agent and told her which key to press. In another, the experimenter looked away and gave the agent a free choice about which key to press.

To examine the participants’ ‘sense of agency’ — the unconscious feeling that they were in control of their own actions — Haggard and his colleagues designed the experiment so that pressing either key caused a tone to sound after a few hundred milliseconds, and both volunteers were asked to judge the length of this interval. Psychologists have established that people perceive the interval between an action and its outcome as shorter when they carry out an intentional action of their own free will, such as moving their arm, than when the action is passive, such as having their arm moved by someone else.

When they were ordered to press a key, the participants seemed to judge their action as more passive than when they had free choice — they perceived the time to the tone as longer.

In a separate experiment, volunteers followed similar protocols while electrodes on their heads recorded their neural activity through EEG (electroencephalography). When ordered to press a key, their EEG recordings were quieter — suggesting, says Haggard, that their brains were not processing the outcome of their action. Some participants later reported feeling reduced responsibility for their action.

Unexpectedly, giving the order to press the key was enough to cause the effects, even when the keystroke led to no physical or financial harm. “It seems like your sense of responsibility is reduced whenever someone orders you to do something — whatever it is they are telling you to do,” says Haggard.

The study might inform legal debate, but it also has wider relevance to other domains of society, says Sinnot-Armstrong. For example, companies that want to create — or avoid — a feeling of personal responsibility among their employees could take its lessons on board.