Will the warming planet be able to sustain coming generations? Few questions about the future matter more. But although modellers can forecast temperature changes and even precipitation, they struggle to say how climate change will affect the factors that make the planet habitable, such as food and water availability. Last week at the Potsdam Institute for Climate Impact Research (PIK) in Germany, researchers launched a fast-track programme to make their narratives of possible futures more coherent and useful to decision-makers.

Climate-impact models combine projections of change in physical climate with data on population, economic growth and other socio-economic variables. For various emissions scenarios, they forecast climate-driven changes in crop yields, vegetation zones, hydrology and human health (see ‘The browning of the planet’). But they often leave out important elements: for example, models of health impact often neglect the role of social factors in spreading disease; and models of water run-off may not account for changes in water loss from plants. Researchers have built dozens of models, but have never systematically compared their performance. As a result, say critics, the literature on climate impacts is as inconclusive as it is encyclopaedic. 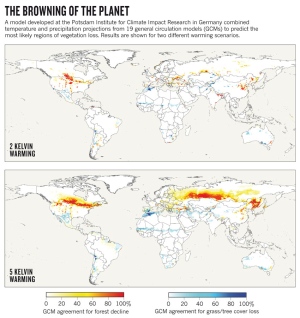 “Impact research is lagging behind physical climate sciences,” says Pavel Kabat, director of the International Institute for Applied Systems Analysis in Laxenburg, Austria, which is to coordinate the fast-track programme jointly with the PIK. “Impact models have never been global, and their output is often sketchy. It is a matter of responsibility to society that we do better.”

The programme, dubbed the Inter-Sectoral Impact Model Intercomparison Project (ISI-MIP), involves more than two dozen modelling groups from eight countries, and they have set themselves a tight deadline. At the kick-off meeting at the PIK, the researchers agreed to complete a comprehensive set of model experiments within six months. All the simulations will cover the globe at the same resolution, and will be based on the same set of climate data from state-of-the-art climate models, driven by the latest greenhouse-gas emission scenarios (R. H. Moss Nature 463, 747–756; 2010).

The comparison should reveal systematic biases that lead models to give widely differing results. The ‘refined’ models will still give a range of answers — but the modellers hope that the diversity will be informative rather than frustrating. “We’ll never be able to tell exactly what the future will look like,” says Ottmar Edenhofer, chief economist at the PIK. “But we can illuminate plausible paths, and multi-model comparisons help light up the black boxes.” For example, he says, the severity with which crop failures affect poor societies depends on factors such as global trade flows and local institutions and infrastructure — which some models can handle better than others.

By January 2013, the project hopes to produce papers detailing the impact of climate change on global agriculture and water supplies, vegetation and health. The results could find their way into the next report of the Intergovernmental Panel on Climate Change (IPCC), which is set to be published in 2013–14. “It will make a real difference for the assessment process,” says Chris Field, an ecologist at the Carnegie Institution for Science in Stanford, California, and co-chairman of the IPCC’s working group on impacts, adaptation and vulnerability.

The ISI-MIP will continue into 2013 and may be expanded to cover impacts on transport and energy infrastructures, both of which are vulnerable to the effects of rising temperatures and changing weather. It will also feed into other efforts, such as a five-year, 30-million-renminbi (US$4.8-million) Chinese programme on climate-related risks, such as floods and droughts. “This exercise will greatly inform our own studies,” says Qiuhong Tang, a hydrologist at the Chinese Academy of Science’s Institute of Geographic Sciences and Natural Resources Research in Beijing, and co-leader of the Chinese project. Impact modelling will be a major part of it, he says, because “climate change may greatly affect water resources and food security in the world’s most populous country”.