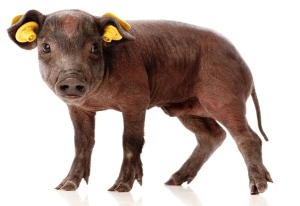 The three litters of Yucatan miniature piglets, born in late May, dwell in a space more like a neonatal care unit than a barn. They require hand-feeding and frequent veterinary attention from the staff at Exemplar Genetics in Sioux Center, Iowa. Their muscles already show the signs of deterioration that they were bred for.

As the United States’ first genetically engineered (GE) pigs with muscular dystrophy, the creatures could be used to test treatments for the disease. But their utility will remain limited for the time being, while the US Food and Drug Administration (FDA) works out how to regulate them.

Exemplar Genetics, which aims to sell GE pig models for use in academic and pharmaceutical laboratories, has so far bred about 275 pigs — some with cystic fibrosis, others with heart disease, arrhythmia or cancer, and now muscular dystrophy. Because pigs mimic these human diseases more closely than mice, they are desirable models for drug testing and for studying the disease process.

However, as the first company to seek approval for a disease model in a GE animal that could, in theory, also be eaten, Exemplar is navigating a dimly lit regulatory path. In 2009, the company submitted its first application to the FDA for approval of its cystic fibrosis pig model. “We don’t really know what additional steps we need to do in order to get FDA approval for full commercialization,” says John Swart, president of Exemplar. Nevertheless, the company remains hopeful that its pigs will skirt the hardships that have befallen other GE animals in the pipeline.

As early as 1999, the FDA spoke about the promise of GE animals for both food and pharmaceutical purposes. Ten years later, the agency created a framework to judge their safety. In 2009, it applied the guidelines in approving a GE goat that produces a blood-clotting drug in its milk.

Since then, however, FDA approvals for two GE food animals have stalled: a salmon with a gene prompting faster growth, and a hog engineered to excrete less-toxic manure. Members of Congress have voiced their fears about such ‘frankenfish’, and environmental groups are concerned that transgenic animals might escape and interbreed with wild populations.

In April, amid the delays, the University of Guelph in Ontario, Canada, which was sponsoring the environmentally friendly hog, backed out of the approval process. Last month, the experimental hogs were put down. AquaBounty, the GE salmon company, based in Maynard, Massachusetts, fears that it, too, may have to pull its product if delays persist. “We’ve done everything we’ve been asked to do, and nothing has happened for so long that it’s threatening the existence of our company,” says Ronald Stotish, AquaBounty’s president. The FDA declined to comment on any pending GE animal applications.

With salmon frozen in the pipeline, Exemplar’s piglets might skip to the front of the queue. “GE pigs for medical models could move more quickly because there’s a strong need for them in the medical community,” suggests David Edwards, director of animal biotechnology at the Biotechnology Industry Organization based in Washington DC. Although animal-rights advocates may object to disease-model pigs, Swart predicts that they will avoid intense public scrutiny because they aren’t meant to be eaten.

Nonetheless, Swart is worried about the regulatory process for ‘new animal drugs’ (NAD), which applies to all GE animals, whether they’re bred to produce food, drugs or, in Swart’s case, disease. “The NAD process doesn’t fit us real well,” he says. When Swart asked the FDA how to demonstrate the requirement that his products are safe for human consumption, he says the FDA revised the rule: Exemplar must ensure that no unintended consequences befall the animals themselves. But Swart points out that diseases have variable symptoms. “We don’t know much about these diseases, which is why we need a model.”

While the pigs plod through the process one step at a time, a handful of investigators at US universities have already begun to study how diseases develop in the transgenic animals. Because the pigs aren’t federally approved, Exemplar must track each pig from birth to beyond the grave. If a scientist in Iowa sends tissue from one of the animals to a colleague in California, Exemplar knows. Moreover, without approval, Exemplar cannot promote the pig models for drug testing based on what the researchers find.

Exemplar has repeatedly asked for an exemption from the NAD category, such as that granted to transgenic mice, but so far the FDA has not provided one. Although delays have nearly driven other GE animal companies under, Swart calls the wait worthwhile if Exemplar’s pigs can help pharmaceutical companies to predict whether a drug will work. “It’s critical to figure out how to do this right with the FDA,” he says.