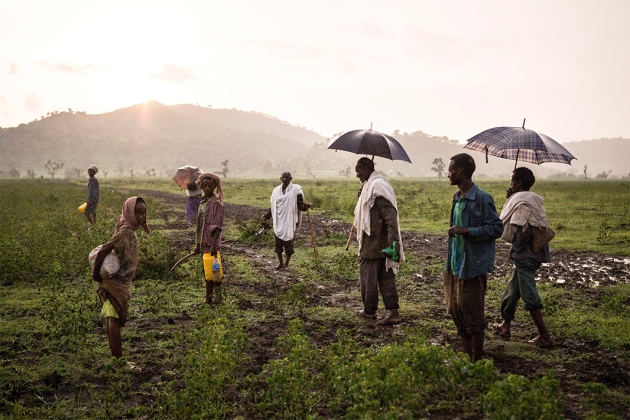 People in the developing world could benefit from improved precipitation forecasts.

Meteorologists have long struggled to forecast storms and flooding at the level of streets and neighborhoods, but they may soon make headway thanks to the spread of mobile-phone networks.

This strategy relies on the physics of how water scatters and absorbs microwaves. In 2006, researchers demonstrated that they could estimate how much precipitation was falling in an area by comparing changes in the signal strength between communication towers1. Accessing the commercial signals of mobile-phone companies was a major stumbling block for researchers, however, and the field progressed slowly. That is changing now, enabling experiments across Europe and Africa.

The technology now appears ready for primetime. It could lead to more precise flood warnings — and more accurate storm predictions if the new data are integrated into modern weather forecasting models. Proponents also hope to use this approach to expand modern weather services in developing countries.

The newest entry into this field is ClimaCell, a start-up company in Boston, Massachusetts, that launched on 2 April. The 12-person firm says that it can integrate data from microwave signals and other weather observations to create more accurate short-term forecasts. It notes it can provide high-resolution, street-level weather forecasts three hours ahead, and will aim to provide a six-hour forecast within six months. The company has yet to make information on its system public or publish it in peer-reviewed journals.

ClimaCell will start in the United States and other developed countries, but plans to move into developing countries including India later this year. “The signals are everywhere, so basically we want to cover the world,” says Shimon Elkabetz, ClimaCell’s chief executive and co-founder. 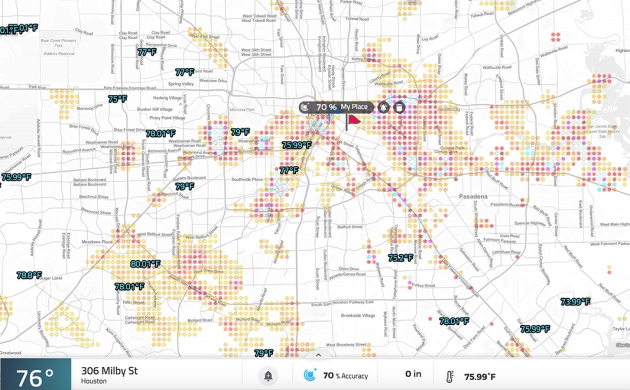 An example of a hyperlocal rain forecast from ClimaCell.

But the fledgling company faces competition from researchers in Europe and Israel who have tested systems at multiple scales, including countries and cities, over the past several years. The scientists recently formed a consortium to advance the technology using open-source software. Coordinated by Aart Overeem, a hydrometeorologist at the Royal Netherlands Meteorological Institute in De Bilt, the group is seeking nearly €5 million (US$5.3 million) from the European Commission to create a prototype rainfall-monitoring system that could eventually be set up across Europe and Africa.

“There is a lot of evidence that this technology works, but we still need to test it in more regions with large data sets and different networks,” Overeem says. Although ClimaCell has made bold claims about its programme, Overeem says he cannot properly review the company's technology without access to more data.

“The fact that a start-up company and commercial investors are willing to put money into this technology is good news, but I believe there is room for all,” says Hagit Messer, an electrical engineer at Tel Aviv University in Israel, who led the 2006 study. She is part of the research consortium led by Overeem.

Previous projects by members of the consortium that tested the technology have met with success. In 2012, for instance, Overeem and his colleagues showed that the technology could be applied at the country level using commercial microwave data in the Netherlands2. And in 2015, the Swedish Meteorological and Hydrological Institute (SMHI), headquartered in Norrköping, launched a prototype real-time ‘microweather’ project in Gothenburg. It collects around 6 million measurements in the city each day in partnership with the telecommunications company Ericsson and a cellular tower operator. The result is a minute-by-minute estimate of rainfall on a 500-metre-resolution map that encompasses the city.

Jafet Andersson, an SMHI hydrologist, says that the project has helped to advance the technology. For example, he notes that microwave data often overestimate rainfall by as much as 200–300%. But the team has worked out how to correct for that bias without relying on reference measurements from rain gauges or ground-based radar. This will make it easier to extend the technology to developing countries.

“It will take some time, but we are in the process of industrializing it on a country scale, or even a global scale,” Andersson says.

Researchers with the consortium have deployed the technique in African countries that do not have access to ground-based radar and extensive rain-gauge networks. A team led by Marielle Gosset, a hydrologist at the French Institute for Development Research in Toulouse, demonstrated a proof-of-concept system in Burkina Faso3 in 2012 and has since branched out to other countries including Niger. Working with French telecoms giant Orange, and with funding from the World Bank and the United Nations, her team hopes to expand into Morocco and begin using real-time microwave data in Cameroon this year.

The technology is attracting interest in Africa because conventional weather-monitoring systems such as radar are too expensive, Gosset says. Weather forecasts based on microwave signals give developing countries a similar system, but for less money, she says.

Access to commercial data is getting easier, too. Researchers say that telecommunication companies are beginning to see the value of releasing the data, and the consortium plans to create a central repository for processing the information. Project scientists hope to create a model that will enable a smooth partnership with the industry.

“I think that this door is just about to open,” says Andersson.