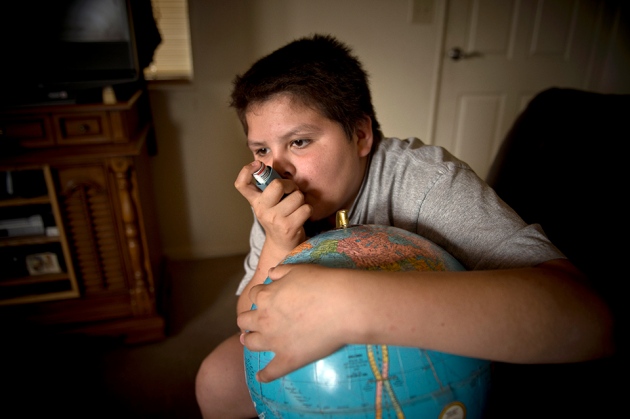 Almost 9,000 people with asthma use a smartphone app daily to record their symptoms and triggers.

Last summer, physician Yvonne Chan wondered how the wildfires raging through Washington state were affecting people with asthma — for whom smoke and heat can trigger breathing difficulties. So she tapped into data collected through the Asthma Health iPhone app, which 8,700 people with asthma use each day to record their symptoms and triggers. Chan found that when fires flared up, so did asthma symptoms and reports of environmental triggers among users living near the blazes.

“In the past, stuff like this was just logistically impossible to do,” says Chan, director of digital health at the Icahn Institute for Genomics and Multiscale Biology at Mount Sinai in New York City. “It opens up a brand-new area of research.”

Researchers are only now gaining access to these mobile-collected data sets, but the scope of such programs is expanding: on 21 March, Apple announced that ResearchKit apps can now import a user’s genetic data from the consumer testing service 23andMe, based in Mountain View, California. Chan’s asthma app and MyHeartCounts, a cardiovascular-disease app developed by Stanford University in California, will be the first to be able to easily incorporate users’ 23andMe data, if participants allow it.

“The biggest thing we’re likely to get with these apps is scale,” says neuroscientist James Beck, vice-president for scientific affairs at the Parkinson’s Disease Foundation in New York City. mPower, a ResearchKit app that is aimed at people with Parkinson’s disease, has enrolled more than 6,800 participants — 3 times the number in the largest previous Parkinson’s study.

Collecting health data through an app also makes it easy to share them with other researchers. The mPower and asthma apps ask users whether they would like to make their data available for further analyses. So far, most have agreed — 75% with mPower and 90% in the asthma study. On 3 March, roughly one year after mPower launched, it released a data set from its users — a huge departure from the past, when it would have taken years to collect and distribute such a large amount of data.

“One of the things I like about these new digital ways of gathering information is that it’s an opportunity to have data-sharing enabled by the trial itself,” says Stephen Friend, president of Sage Bionetworks, a non-profit organization in Seattle, Washington, that developed mPower.

Still, many researchers are taking a wait-and-see approach to the new technology. ResearchKit launched last year with 5 apps; there are now 25, tracking conditions including autism, breast cancer and multiple sclerosis. Some are surprised that more scientists haven’t developed their own apps: “I’m shocked to see that we’re a year into this and there’s so few apps in there,” says Atul Butte, director of the Institute for Computational Health Sciences at the University of California, San Francisco.

“We’re just at the edge of this wave.”

Some may be wary about the quality of the data collected by mobile apps; in many of the ResearchKit studies, study personnel do not meet participants, raising questions about the quality of the data that these participants provide. With this in mind, researchers are working to spot-check their app data. Chan’s team has examined whether the height and gender of the asthma-app users correlate as expected with peak flow, a measurement of breathing ability that is usually higher for men and for taller people. So far, that relationship has held up. “We don’t have participants randomly entering bad data,” Chan says.

And Euan Ashley,  a Stanford cardiologist who is the principal investigator for MyHeartCounts, is trying different strategies to recruit a diverse user base, since app users can skew male. The MyHeartCounts team is linking advertising for its study — which has roughly 50,000 participants — to specific Internet search terms and partnering with the Women's Health Initiative, a longrunning US study.

But whether research apps can keep users engaged over the long term is an open question. For instance, mPower uses the iPhone’s accelerometer and microphone to measure the steadiness of participants’ gait and speech, respectively. But only about 1,000 mPower participants have elected to fill out a survey that assesses cognitive function.

“There’s a drop-off in interest as things get more difficult to do,” Beck says. “There needs to be some value to the user, so that people don’t pick it up and play with it for the first hour and never go back to it.”

Friend agrees. His company is working on making the mPower app more user-friendly. “When we look back on it, we’ll probably go, ‘Wow, this is clunky’,” he says of the current app.

And researchers are still working out how best to use the data from such programs. Because participants’ data are collected in real time and much more often than usual — for example, daily, as opposed to during a quarterly visit to a physician’s surgery — one logical application is in clinical trials of therapeutics. Pharmaceutical company Roche, based in Basel, Switzerland, has developed a Parkinson’s app that it is using in a study of a new drug.

Others suggest that mobile-enabled research may eventually lead to wearable devices that automatically collect information about participants in real time — such as those being developed by Verily in Mountain View. Its Baseline Study will use wearable devices to collect user data, with the aim of gaining insights into how to detect and prevent disease.

Says Beck: “We’re just at the edge of this wave.”