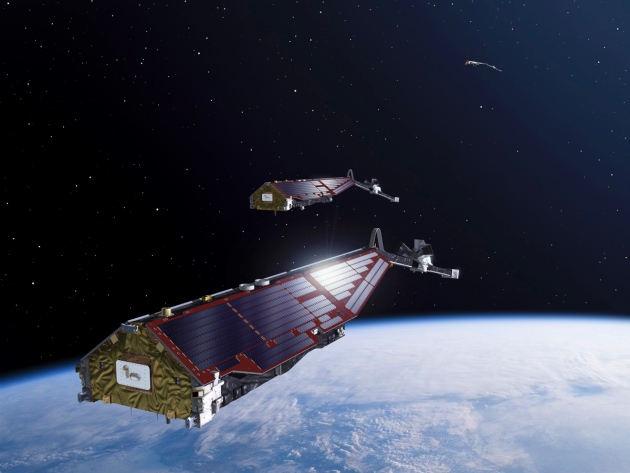 Swarm's three probes will circle the Earth to map subtle and not-so-subtle variations in the magnetosphere.

A trio of European satellites is being readied for launch tomorrow from Russia’s Plesetsk spaceport to study Earth's magnetic field in unprecedented detail. The €220-million (US$296-million) mission, known as Swarm, will map the magnetosphere for at least four years.

At 12.02 gmt, a Russian Rockot launcher is scheduled to take off, lifting the three identical satellites into polar orbits. If all goes according to plan, two of the spacecraft will orbit the planet side-by-side at an initial altitude of 450 kilometres. The third satellite will fly 70 kilometres higher, and at a slightly different inclination.

Mission managers with the European Space Agency (ESA) are awaiting the launch — postponed twice owing to problems with the Russian rocket’s upper stage — with anxiety. In 2009, a Rockot carried two ESA Earth-observation satellites — GOCE (Gravity field and steady-state Ocean Circulation Explorer) and SMOS (Soil Moisture and Ocean Salinity) — safely into orbit. But in 2005, ESA’s ice-observing CryoSat satellite crashed into the Arctic Ocean after a Rockot vehicle failed to reach orbit.

Last week, two Russian workers were killed while cleaning tanks at the Plesetsk launch facility. The accident was unrelated to the launch preparations for Swarm, says Floberghagen.

If the Rockot lifts off as planned, some delicate manoeuvring will still be required in space to push the three satellites into the right position. After a three-month commissioning phase, the trio will begin to independently measure the various electric currents in and around Earth.

Equipped with sensitive magnetic- and electric-field monitors, the satellite constellation will provide the most detailed survey yet of the ever-changing magnetic field that helps to shield Earth from charged particles streaming from the Sun.

The mission's primary objective is to separate Earth's geomagnetic field from the magnetic field induced in the uppermost magnetosphere by the Sun's charged particles. “One man’s signal is another man’s noise,” says Floberghagen.

“The satellite constellation will allow us to simultaneously observe the day and night sides of the Earth at any time,” says Eigil Friis-Christensen, who chairs the Swarm mission advisory group. “We can thus distinguish between signals stemming from things that happen on the Sun from signals generated in the Earth’s core, mantle and crust.”

Small differences in simultaneous measurements made by the lower pair of satellites will reveal the location of magnetized rock in Earth’s upper crust. “If the pair flies over a large iron mine, we would expect to see a magnetic signal,” says Friis-Christensen. Mapping crustal ‘magnetization’ at high resolution will help to characterize geological provinces and identify mineral and ore deposits, he says.

Swarm will also help scientists to understand how the geomagnetic field is evolving over time. The magnetic north and south poles wander about all the time, and every few hundred thousand years the poles flip around, so that a compass would point south instead of north. Moreover, the strength of the geomagnetic field has decreased by 10–15% since ground measurements began around 1840.

Perhaps the decline is no more than a magnetic 'jerk'. But it could also be the prelude to a looming geomagnetic-field reversal. Geophysicists know from analyses of volcanic rock — which records the direction of the magnetic field at the time it solidified from lava — that Earth’s polarity last flipped some 780,000 years ago. “A reversal is overdue, if you will,” says Friis-Christensen.

The weakening, he says, is probably the result of changing currents and vortices in the planet's outer core, an ‘ocean’ of molten iron that slowly whirls around a solid, inner core. Swarm's data should help to improve computer models of these currents and to provide more-informed projections about the evolution of the geomagnetic field, says Richard Holme, a geophysicist at the University of Liverpool, UK.

“Earth’s magnetic field is still a bit of a mystery,” he says. “Swarm could shed light on many questions, and it will open up a completely new window on previous data and historical records.”

Swarm successfully launched at 12.06 gmt on 22 November, and the three probes have reached their target orbits, according to ESA.