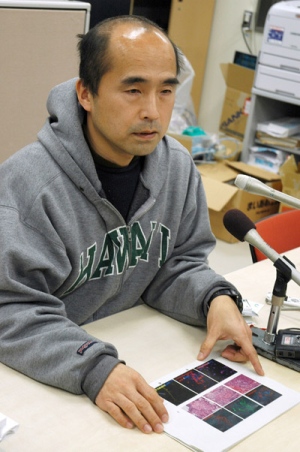 Teruhiko Wakayama carried out his analysis after questions were raised about the two Nature papers.

A genetic analysis of stem cells has raised fresh confusion about papers detailing a simple method to reprogram mature cells into an embryonic state.

Haruko Obokata of the RIKEN Center for Developmental Biology (CDB) in Kobe, Japan, said that she had produced two stem-cell lines from a certain strain of mouse using the method, but the lines have been found to come from different strains. If verified, the findings suggest that contamination, rather than the much-touted new method, produced the cells.

“Something is grossly wrong,” says Hiromitsu Nakauchi, a University of Tokyo stem-cell researcher.

The genetic analysis by cloning expert Teruhiko Wakayama of Yamanashi University, Japan, who collaborated with Obokata on the papers, was conducted on stem-cell lines that Obokata produced alone as part of internal efforts to test the method before publication, and that did not form part of her team’s papers. Similar genetic tests on the published cell lines, carried out by Wakayama at the same time, showed the expected genetic match between the stem cells and the source mice, Wakayama told Nature News. (Nature News is editorially independent of the research-publications section of Nature.)

Wakayama’s genetic findings come less than a week after the senior corresponding author on one of the papers posted a protocol giving a more detailed explanation of the STAP method to help researchers to repeat the experiment. The move by Charles Vacanti, of the Brigham and Women's Hospital, in Boston, Massachusetts, was intended to address the fact that no one outside the team has yet claimed success in reproducing its method, despite more than a dozen independent attempts. A Brigham and Women's Hospital spokesperson told Nature News that Vacanti “is not speaking to media at this time”.

Obokata and her colleagues in Japan and at Brigham and Women's Hospital, announced the technology in Nature on 30 January. Their two papers1, 2 described how stressing mature cells by placing them in an acidic solution or putting them under physical pressure could return them to an embryonic state in which they achieved pluripotency — the ability to give rise to all of the body’s cells. The team called the phenomenon stress-triggered activation of pluripotency, or STAP.

But problems in those papers, including the presence of duplicated images and plagiarized passages, triggered an investigation by RIKEN. Previous work by Obokata, including her doctoral thesis, has also been called into question. RIKEN is continuing to investigate the two Nature papers after preliminary inquiries found four “serious errors” in them, including the uncited use of long passages from another paper. Obokata has resisted requests from CDB director Masatoshi Takeichi to retract the publications, because she maintains that they describe a real phenomenon. She did not respond to e-mail inquiries about Wakayama’s genetic analysis.

Wakayama, a co-author of the Nature papers, decided to carry out his analysis of the STAP cell lines in response to the questions raised about them. He says that all of his tests were “just simple preliminary tests done in his own laboratory”, and they have not been verified by others. He has also passed a batch of 20 STAP cell lines to an unnamed independent institution for in-depth investigation. The institution’s report will not be published for a few months, he says.

On 25 March, Wakayama told Nature News that his preliminary analysis of the STAP cell lines on which Obokata worked alone showed that they were genetically distinct from the ‘129 strain’ of mouse said to have been used to derive them. Instead, he says, they came from two other strains, known as B6 and 129B6F1 hybrid. “This discovery was a shock,” says Wakayama.

The two genetically mismatched cell lines were not part of the experiments published in Nature: they were the result of an experiment that Obokata performed in the build-up to publication, after Wakayama gave her a mouse from the 129 line rather than the line used in the papers, the 129B6F1 hybrid. He did so after wondering whether the STAP technology would work with other strains of mice. Success with the 129 line was mentioned in passing in the methods section of the main paper, but data from STAP cells derived from line 129 were not described.

Wakayama says that whenever he gave Obokata other lines of mice to test, such as the 129 line, she “would produce STAP cells without fail”. But the data for those other lines were “for some reason not included in the Nature papers”. “This result does not call into question the Nature papers,” he adds.

Wakayama also performed a genetic analysis of some of the STAP stem-cell lines for which data were described in the paper. As expected, they showed a genetic match with the 129B6F1 strain that was used in the experiment.

Wakayama says that RIKEN and the independent institute are now discussing his findings. A RIKEN press officer told Nature News: “At present, I cannot confirm the details.”

Contamination of stem-cell lines can happen. “But the chance of having two STAP cell lines contaminated by different embryonic stem lines is very, very small,” says Nakauchi, who has not seen Wakayama’s analysis.

“This is really, really confusing,” says stem-cell scientist Hans Schöler, who works at the Max Planck Institute for Molecular Biomedicine in Münster, Germany, and was not involved in the Nature papers. He has not seen Wakayama’s analysis, but he adds that “so far I do not see any proof of misconduct. Moreover, I am still not convinced that STAP cells are bogus.”