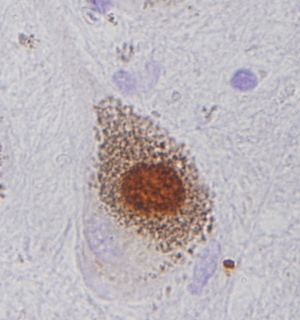 The catastrophic damage wreaked by a rogue protein involved in Parkinsons' disease has been tracked by researchers, in work that might help to reinvigorate an old treatment strategy to slow the condition.

A team led by Virginia Lee, a neurobiologist at the University of Pennsylvania in Philadelphia, injected a misfolded synthetic version of the protein α-synuclein into the brains of normal mice and saw the key characteristics of Parkinson’s disease develop and progressively worsen. The study, published today in Science1, suggests that the disease is spread from one nerve cell to another by the malformed protein, rather than arising spontaneously in the cells.

The finding raises the possibility that an antibody that binds the misfolded α-synuclein could be used to intercept the protein as it passes between nerve cells. “It’s very hard to ask antibodies not only to get inside the brain, but to get inside cells,” says Lee. “But now you have the possibility of stopping the spreading. And if you stop the spreading, perhaps you can slow the progression of the disease.”

The idea that Parkinson’s might be spread from neuron to neuron by a rogue protein took off in 2008, when transplants of fetal nerve tissue given to patients with the disease developed the characteristic clumps associated with the condition2, 3. This indicated that the nearby diseased cells had somehow infected the transplanted tissue. Subsequent studies showed that misfolded α-synuclein can spread between neighbouring cells4 and can cause cell death5.

But the question remained as to whether the misfolded α-synuclein was responsible for the cascade of damage seen in Parkinson’s. Lee says that her team has now captured the full consequences of runaway α-synuclein in the brain.

“We knew this transfer from one cell to another can happen, but whether it could play a significant role in the disease was still open,” says Tim Greenamyre, director of the Pittsburgh Institute for Neurodegenerative Diseases in Pennsylvania, who was not involved in the latest work.

Parkinson’s disease has two distinct features: clumps of protein called Lewy bodies and a dramatic loss of nerve cells that produce the chemical messenger dopamine. When Lee’s team injected the misfolded α-synuclein into a part of the mouse brain rich in dopamine-producing cells, Lewy bodies began to form. This was followed by the death of dopamine neurons. Nerve cells that linked to those near the injection site also developed Lewy bodies, a sign that cell-to-cell transmission was taking place, say the researchers.

Greenamyre says that that is possible, but hasn’t yet been proved. “All of the cells affected in this paper were those directly in contact with the injection site,” he says.

Nevertheless, within six months of the injection, coordination of movement, grip strength and balance had all deteriorated in the mice, echoing what happens in people with Parkinson’s disease.

“It’s really pretty extraordinary,” says Eliezer Masliah, a neuroscientist at the University of California, San Diego. “We have been trying that experiment for a long time in the lab and we have not seen such dramatic effects.” The study lends theoretical support to the handful of biotechnology companies that are sponsoring clinical trials of α-synuclein antibodies for Parksinson’s, Masliah says. It should also spur research on how the protein gets in and out of cells, he adds.

At least one mystery still remains: why do the Lewy bodies appear in the first place? “Parkinson’s disease is not a disorder in which somebody injects synuclein into your brain,” notes Ted Dawson, director of the Institute for Cell Engineering at Johns Hopkins University in Baltimore, Maryland. “So what sets it in motion?”