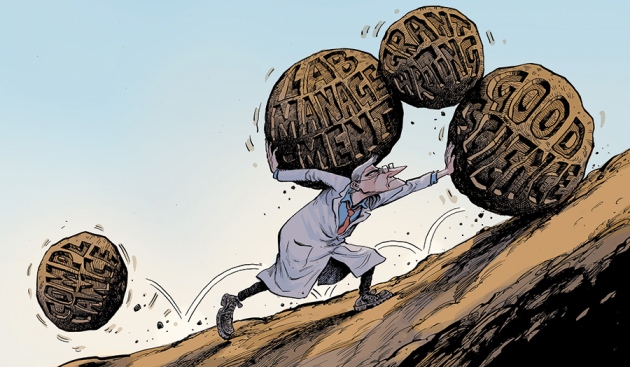 In 2013, we launched a training programme that no scientist wants to list on their CV. Participants are referred to it by their home institutions, usually after having their research privileges suspended. Several times a year, a small group of researchers arrives in St Louis, Missouri, for a course that we designed to help participants regain their research privileges. We are grant-funded faculty members with backgrounds in psychology and research ethics. The programme — initially called RePAIR, now called the Professionalism and Integrity Program, or PI Program — was developed with funding from the US National Institutes of Health, and participants pay a fee to attend.

About half of our participants are enrolled after a failure of oversight that resulted in the publication of false data or faulty consent. Other common reasons include plagiarism and documentation problems. Researchers are often referred on multiple grounds (see ‘Why attendees enrolled’; and Supplementary Information).

Many arrive convinced that they have been misjudged. One said, “The programme sounds like it’s for criminals — not me.”

Three intense days later, attitudes change. Participants generally express gratitude for the programme. A year later, follow-up surveys indicate that the vast majority have changed how they work. We, the programme instructors, have also adjusted our research practices: we now appreciate how easy it is to run afoul of rules when busy schedules collide with complex projects.

Before arriving at our small group workshop, participants complete a battery of assessments. On the final day, they write a professional-development plan, which outlines strategies to, say, hold regular team meetings, seek further training on compliance rules, or restructure workloads. Over the next three months, we conduct an average of three coaching telephone calls with alumni as they implement their plans.

We began our programme not knowing who would attend, or even whether what we were doing was a good idea. Three years in, we're convinced that it is worthwhile. We have now trained 39 researchers from 24 institutions. Researchers in our programme do not display personality traits that are distinct from the general population of scientists. We believe that most researchers may be susceptible, and that the busiest ones are most likely to err.

There are high-profile cases of serial fraudsters who have consciously built their careers on fabricated data and who, some research suggests, have personality disorders1. We do not encounter such individuals in our programme. In general, we work with talented faculty members who seek to do good research and whom institutions wish to retain.

To understand what led to these individuals’ mistakes, we draw on several data sources. Over the past two years, we have surveyed participants on factors such as their knowledge of research rules, job-related stress, how much an individual uses cognitive distortion to justify compliance breaches2, and their use of strategies that improve professional decision-making3. We compared their survey scores with those of a national sample of 400 researchers funded by the US National Institutes of Health. Our participants did not differ from this sample’s mean scores on any measures thought to be connected to compliance or research integrity.

We also profiled participants’ work-related attributes. The Clifton StrengthsFinder is a test to identify employees’ strongest talents4. It is widely used by organizational psychologists in corporate settings, and its validity and reliability has been documented in diverse professions. Most of our participants had top scores in 2 of 34 possible areas: achiever and learner. This is not surprising, given that all participants had doctoral degrees and had been in full-time employment in research institutions. However, test results showed a dearth of compliance-related talents, such as focus, discipline and consistency.

Although we do not have a national comparison sample for this test, a meta-analysis suggests that most scientists would share such a profile. Among the most common traits associated with scientific creativity are: being less conventional, being more open to new experiences, and ambitiousness5.

During day two of the workshop, participants share with the group what led to their referral. Assurances of confidentiality and the presence of others in similar situations mean that participants are markedly forthright. We reflected on their stories and other information gathered to contemplate why they found themselves in trouble. For most, we identified multiple causes (see ‘Why researchers stumbled’). 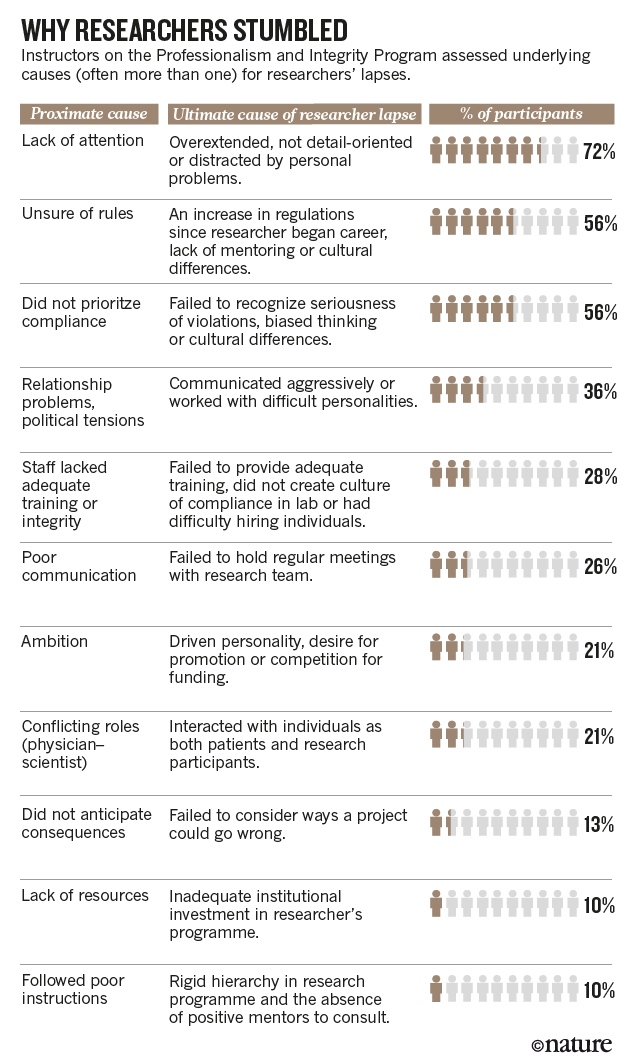 Three causes played a part in most cases: paying too little attention to details or oversight; being unsure about relevant rules; and not prioritizing compliance. All these could be attributed to other, more basic causes. For example, many participants provided too little oversight of their teams because they were overextended or understaffed. People sometimes were unsure of rules after moving into a new area of research. They also encountered regulations that had grown more complex since they completed their training.

Our experience with programme participants challenges several misconceptions about misconduct.

Only bad apples get into trouble. We do not want to minimize the seriousness of participants’ violations. Institutions face large fines for non-compliance with federal rules; deficient research hurts the quality of scientific literature, and human and animal subjects may be put at risk. Nevertheless, participants’ infractions rarely resulted from a conscious intent to mislead or break rules.

Often, programme participants had in their research tried to ensure that the fundamental purpose of compliance was satisfied — for example, that research participants understood and freely consented to study conditions, that animals were kept pain free, or that data supported conclusions. They did so, however, in ways that fell short of full compliance. As one participant put it: “Prior to this situation, I tried to follow the spirit of the law — now I try to follow the letter of the law.”

Though our participants were not different from other researchers in terms of their knowledge of rules, knowledge deficits sometimes played a big part in their situations. Most researchers function fairly well within complex regulatory systems, but problems arose when they entered new territory — for example, running their first clinical trial involving drugs or devices subject to regulations of the Food and Drug Administration.

The role of culture in research compliance is rarely discussed. For example, in the United States, plagiarism is taken much more seriously than violation of rules about how credit for work is assigned, but such common values are rarely expressed explicitly. Research-ethics programmes often attach the same significance to all rules, and may leave some scientists ignorant of unspoken norms.

A slight majority of our participants came to the United States from elsewhere; roughly double the expected proportion on the basis of the demographics of the US scientific workforce. (Our previous studies indicate that nation of birth is a stronger predictor of scores on key measures than is nation of training.) Although many participants were accustomed to US compliance requirements, they sometimes employed or mentored people who were not. Some of these junior lab members made poor assumptions about appropriate processes that participants failed to correct. For example, one participant did not review a postdoc’s data and analyses because he felt doing so would imply mistrust. We suggested that the participant frame his reviews of lab members’ work as modelling appropriate behaviour, explicitly telling postdocs that they would also be expected to provide this kind of oversight if they headed a lab.

Scientific skills are enough to do good science. The idea behind the StrengthsFinder assessment is that people tend to be strong in some areas but not in others. Scientists have long had to master skills associated with, for instance, artists (creativity) and accountants (attention to detail). In an increasingly competitive environment, requirements for both talents have increased, and scientists must also have the good communication and negotiation skills often associated with politicians. Building teams with complementary skills is ideal, but it is not always easy or even possible when resources are limited.

Reporter Kerri Smith finds out about the researchers going on rehab.

When situations demand skills that a team does not have, compensating strategies may be helpful3. For example, standard operating procedures (SOPs) or checklists can facilitate the consistent performance of compliance tasks — such as getting approval for each animal-research protocol — even when tasks or team members are new, or when people are tired. The principal investigator who creates SOPs for compliance and data integrity also sends the message that these are as important as the science itself. Even with SOPs, principal investigators must actively oversee compliance activities and ensure that staff are adequately trained, competent and diligent. Regular meetings can help. Principal investigators are accountable for the integrity of their research projects — they must find ways to assure it even when they themselves are not detail-oriented.

The more publications and grants the better. By the metrics that institutions use to reward success, our programme participants were highly successful researchers; they had received many grants and published many papers. Yet, becoming overextended was a common reason why they failed to adequately oversee research. It may also have led them to make compliance a low priority. People who are too busy must triage, and what scientist wants to prioritize checking patient signatures above data gathering?

Principal investigators should protect themselves and their labs by taking on no more projects than they can responsibly oversee and adequately staff. In general, to do more, researchers need more resources — space, trained staff and mentoring when moving into new areas. A clear lesson from our programme is that compliance requires individual integrity as well as departmental and institutional support. Scientists become overextended in part because their institutions value large numbers of projects.

Before its launch, the programme was criticized on principle: why allocate resources to assist rule breakers to regain their research privileges?

We think these are resources well spent. Questionable research practices are much more widespread than we would like to believe6. Following the workshop, our participants demonstrate more positive attitudes toward compliance, improved problem-solving skills and better lab-management habits. Proactive, preventive training is often recommended as a way to boost research integrity, but there is little evidence that increasing one-size-fits-all training changes behaviour. Certainly, sending someone back to repeat a standard course after a finding of misconduct seems unlikely to help7.

In our view, intense, individualized training following a breach can be remarkably effective. And it is unquestionably much more cost efficient than letting problems fester until even bigger problems arise for investigators and institutions8. Our participants have gone from analysing their own lapses to customizing solutions, such as holding more face-to-face meetings or developing SOPs.

Our experience with the course has made us more compassionate to the participants, and more cautious about our own behaviours. The message that we want to send is this: unless you are careful, it could happen to you. Learning to do compliance well ensures data integrity and protects human and animal subjects; it also protects the careers of researchers and their colleagues.