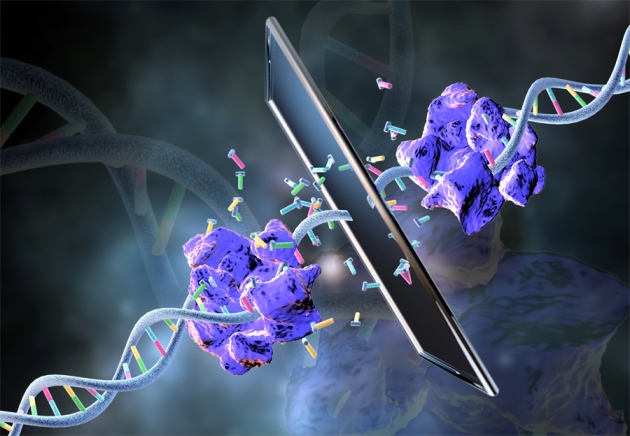 The DNA in our cells twists like a right-handed screw (pictured, bottom); a mirror-image polymerase enzyme is needed to copy left-handed DNA (pictured, top).

Researchers at Tsinghua University in Beijing have created a mirror-image version of a protein that performs two of the most fundamental processes of life: copying DNA and transcribing it into RNA.

The work is a “small step” along the way to making mirror-image life forms, says molecular biologist Jack Szostak of Harvard Medical School in Boston, Massachusetts. “It’s a terrific milestone,” adds his Harvard colleague George Church, who hopes one day to create an entire mirror-image cell.

In principle, looking-glass versions of these molecules should work together in the same way as normal ones — but they might be resistant to attack by conventional viruses or enzymes that have not evolved in a looking-glass world.

That makes mirror-image biochemistry a potentially lucrative business. One company that hopes so is Noxxon Pharma in Berlin. It uses laborious chemical synthesis to make mirror-image forms of short strands of DNA or RNA called aptamers, which bind to therapeutic targets such as proteins in the body to block their activity. The firm has several mirror-aptamer candidates in human trials for diseases including cancer; the idea is that their efficacy might be improved because they aren’t degraded by the body’s enzymes. A process to replicate mirror-image DNA could offer a much easier route to making the aptamers, says Sven Klussmann, Noxxon Pharma’s chief scientific officer.

Researchers have been making chunks of mirror-DNA for decades, so the Tsinghua team could order much of what they needed for their looking-glass DNA replication attempt from a chemical supplier: a mirror-DNA strand to be copied, mirror-DNA building blocks and a shorter mirror ‘primer’ strand that could pick up these building blocks in the right order.

The difficult task was to make the mirror-image enzyme that coordinates the copying process, called DNA polymerase. That would need to be synthesized from right-handed amino acids, but commonly used polymerase enzymes have more than 600 amino acids — meaning that they are too big for current synthetic methods.

So the Tsinghua team turned to the smallest known polymerase: African swine fever virus polymerase X, which contains just 174 amino acids. Unfortunately, it is also spectacularly slow — probably because of its small size, says synthetic biologist Ting Zhu, a former graduate student of Szostak’s who helped to lead the work. The team made a mirror version of the enzyme and found that, like its natural equivalent, it could extend a mirror-primer consisting of 12 nucleotides (DNA building blocks) to an 18-nucleotide mirror-DNA strand in about four hours; and to a 56-nucleotide strand in 36 hours.

When the normal and mirror-image versions of these systems were mixed together in the same test tube, both replication processes worked independently without interference. The mirror-image polymerase could also transcribe mirror-DNA into mirror-RNA, again at a glacial pace. The work is published in Nature Chemistry1.

Klussmann says that Noxxon Pharma is interested in pursuing a similar approach with a more efficient enzyme. Indeed, Zhu and his colleagues next hope to build a mirror-image of a more efficient polymerase known as Dpo4, which is built of 352 amino acids.

In their research paper, the Tsinghua researchers also present their work as an effort to investigate why life’s chirality is the way it is. This remains mysterious: it may simply be down to chance, or it could have been triggered by a fundamental asymmetry in nature.

But Steven Benner, at the Foundation for Applied Molecular Evolution in Alachua, Florida, says it’s unlikely that creating a mirror form of biochemical life could shed any light on this question. Almost every physical process behaves identically when viewed in a mirror. The only known exceptions — called ‘parity violations’ — lie in the realm of subatomic physics. Such tiny differences would never show up in these biochemical experiments, says Benner. (He is also interested in making DNA that can avoid unwanted degradation by natural enzymes or viruses, but rather than using mirror-DNA, he has created artificial DNA with non-natural building blocks.)

Church’s ultimate goal, to make a mirror-image cell, faces enormous challenges. In nature, RNA is translated into proteins by the ribosome, a complex molecular machine. “Reconstructing a mirror-image of the ribosome would be a daunting task,” says Zhu. Instead, Church is trying to mutate a normal ribosome so that it can handle mirror-RNA.

Church says that it is anyone’s guess as to which approach might pay off. But he notes that a growing number of researchers are working on looking-glass versions of biochemical processes. “For a while it was a non-field,” says Church. “But now it seems very vibrant.”