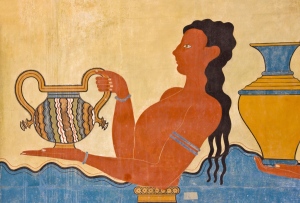 Minoan artefacts are different from those of nearby Bronze-Age Greece — but DNA studies suggest the civilization might be home-grown after all.

When the British archaeologist Sir Arthur Evans discovered the 4,000-year-old Palace of Minos on Crete in 1900, he saw the vestiges of a long-lost civilization whose artefacts set it apart from later Bronze-Age Greeks. The Minoans, as Evans named them, were refugees from Northern Egypt who had been expelled by invaders from the South about 5,000 years ago, he claimed.

Modern archaeologists have questioned that version of events, and now ancient DNA recovered from Cretan caves suggests that the Minoan civilization emerged from the early farmers who settled the island thousands of years earlier.

The Minoans flourished on Crete for as many as 12 centuries until about 1,500 bc, when it is thought to have been devastated by a catastrophic eruption of the Mediterranean island volcano Santorini, and a subsequent tsunami. They are widely recognized as one of Europe's first 'high cultures', renowned for their pottery, metal-work and colourful frescoes. Their civilization fuelled Greek myths such as the story of the Minotaur, the half-man, half-bull creature who lived in a labyrinth.

Evans was among the first to explore Crete after it gained independence from the Ottoman Empire in 1898. His team discovered the 4,000-year-old Palace of Minos, and uncovered artefacts very different from those of Bronze Age Greece, including thick-walled circular tombs that bore a resemblance to those of ancient North Africans, and still-undeciphered scripts dubbed Linear A and Cretan hieroglyphs.

Others have suggested that the Minoans originated in the Middle East, modern-day Turkey or the Mediterranean. Genetic studies of modern Cretans have come to little consensus.

George Stamatoyannopoulos, a geneticist at the University of Washington in Seattle who has been working on the problem for more than a decade, hoped that he could settle the debate by looking at the DNA of the long-dead Minoans. “One of my motivations when I started the whole thing was to see whether Sir Arthur Evans was right or not,” he says.

Stamatoyannopoulos's team assembled bone and tooth samples from more than 100 individuals who lived on Crete between 4,900 and 3,800 years ago. Of these, 37 yielded mitochondrial DNA, which is passed down in the maternal line. The team analysed the samples in two different laboratories — a quality-control method common in ancient DNA work.

The Minoan samples possessed 21 different mitochondrial DNA markers, including 6 unique to Minoans and 15 common in modern, Bronze Age and Neolithic European populations. None of the Minoans possessed mitochondrial markers similar to those of present-day African populations. The results are published online today in Nature Communications1.

It is likely, says Stamatoyannopoulos, that the Minoans descended from Neolithic populations that migrated to Europe from the Middle East and Turkey. Archaeological excavations suggest that early farmers were living in Crete by around 9,000 years ago, so these could be the ancestors of the Minoans. Similarities between Minoan and Egyptian artefacts were probably the result of cultural exchanges across the navigable Mediterranean Sea, rather than wholesale migrations, he adds.

Wolfgang Haak, a molecular archaeologist at the University of Adelaide in Australia, thinks that Crete’s early history is probably more complicated, with multiple Neolithic populations arriving at different times. “It's nevertheless good to see some data — if authentic — from this region of Europe contributing to the big and complex puzzle,” he says.

Stamatoyannopoulos notes that his team’s findings are limited, because mitochondrial DNA represents only a single maternal lineage for each individual — a mother’s mother, and so on. With Johannes Krause, a palaeogeneticist at the University of Tubingen in Germany, the team now plans to sequence the nuclear genomes of Minoans and other ancients to learn more about their history.

“For the last 30, 40 years there’s been a growing sense that Minoan Crete was created by people indigenous to the island,” says Cyprian Broodbank, a Mediterranean archaeologist at University College London. He welcomes the latest line of support for this hypothesis. “It’s good to have some of the old assumptions that Minoans migrated from some other high culture scotched,” he says.