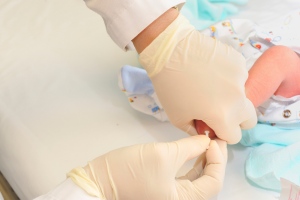 Heel-prick tests in Minnesota can be used to screen newborn babies for 53 serious diseases, but the samples are also crucial for biomedical research.

Minnesota's state health department has this week begun to destroy blood samples that are routinely collected to diagnose serious inherited and congenital diseases in newborn babies. It was compelled to do so by a state Supreme Court decision that such samples cannot not be stored or used for anything except diagnosis without the informed consent of the parents.

"We're going to begin destroying a valuable public health resource, the residual blood spots from about 200 babies born in Minnesota each day," said Edward Ehlinger, Minnesota's health commissioner, in a press release on 31 January. He warned that the new policy “will compromise our ability to assure the quality and accuracy of the newborn screening program". The Minnesota Department of Health (MDH) will now actively ask parents for consent to store blood spots collected from infants who have been diagnosed with one of the 53 diseases tested for, and automatically destroy samples from children who have been given the all-clear.

Until now, Minnesota, like several other US states, has not asked parents for permission to store their children’s samples indefinitely and use them in research. The MDH holds at least one million such samples, collected since 1997. But the Minnesota Supreme Court ruled on 16 November in Bearder v. State of Minnesota that by storing the blood spots, the MDH violates the state’s Genetic Privacy Act, a 2006 law that requires informed, written consent for the collection, storage, use and dissemination of any genetic information.

The MDH has not taken action on the court decision until this week because it takes 71 days to check the samples for all 53 diseases. The hundreds of thousands of samples collected before 16 November are being held in limbo and cannot yet be destroyed, because they are evidence in two further screening-related lawsuits that have been filed against the state. On 30 January, the state began autoclaving and then shredding blood spots collected since the decision, which are stored on cards in freezers at the state’s public-health laboratory in St Paul.

Bearder v. State of Minnesota was brought by nine families who wanted the state to obrtain written informed consent to collect, store or use infants' blood samples. The lawsuit was spearheaded by the Citizens’ Council for Health Freedom in St Paul. The group’s founder and president, Twila Brase, said yesterday that the court decision and sample destruction is good for research because it preserves people’s trust in the scientific enterprise.

“The decision protects individual rights, privacy rights, patient’s rights,” says Brase, a former nurse. “When parents or individuals find themselves used for research without their knowledge or consent, they begin to distrust not only the research enterprise but also the clinics, the hospitals and the doctors who take that information.” 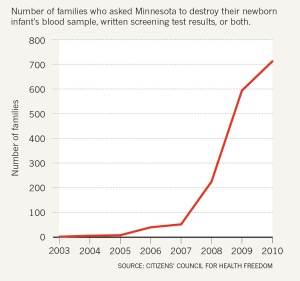 But Jeff Murray, a medical geneticist at the University of Iowa in Iowa City, says that the destruction of the samples “can do irreparable harm to bettering newborn screening and ensuring as many babies as possible can grow up healthy”. In addition to helping to develop new screening tests, he says, research using the blood spots allows scientists to track emerging infections and changes in infectious risks to newborns over time, informing public-health decisions.

Mark Schleiss, a paediatrician at the University of Minnesota Medical School and Amplatz Children's Hospital in Minneapolis, is using anonymized newborn blood samples from the state’s collection in an effort to develop a screening test for cytomegalovirus (CMV) infection, the most common infectious cause of deafness in newborns1. He fears that families will conflate newborn screening itself with breach of their privacy and will opt out of the screening as well as the storage. That could mean that debilitating conditions go undiagnosed. “ I think it’s virtually certain that children will die or be disabled because of this,” he says.

Data provided to Brase's group by the MDH indicate that parental concern about the genetic privacy of their newborns is on the rise. In 2003, two families asked the state to destroy their infant's blood sample, the written results of the baby’s screening, or both. By 2010, that number had grown to 712 (See graph). Over the same period, the number of families opting out of newborn screening altogether grew from 2 to 156.

The MDH says that lack of access to stored blood spots will hinder its work in several ways. For instance, validation of a new test to detect a condition called severe combined immunodeficiency will be delayed while the department buys thousands of blood-spot samples from biobanks in other states, at a cost of about US$10 each. The MDH also regularly uses stored blood spots to validate new test kits, instruments and reagents.

Wylie Burke, chairwoman of the Department of Bioethics and Humanities at the University of Washington in Seattle, says that the lack of an informed-consent process is part of the history of newborn screening, and that “this is not necessarily a problem” — as long as the samples are used for screening to find infants who need urgent treatment.

As for using the samples for research, the lesson from Minnesota “is pretty clear”, says Burke. “Parents have a right to know when a researcher wants to use their child's blood sample for research, and to be given the opportunity to agree or decline participation.”