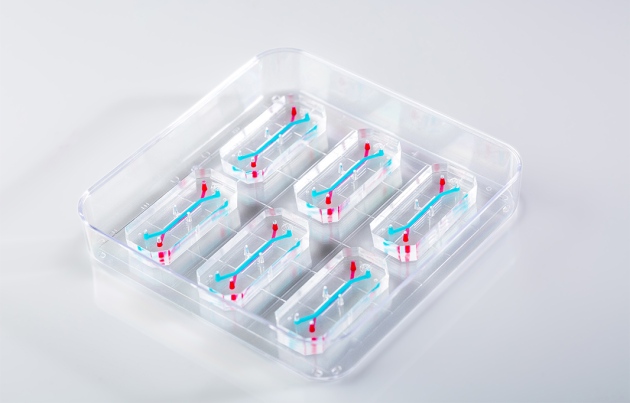 The liver-on-chips that the FDA is currently testing.

The US Food and Drug Administration (FDA) has started testing whether livers-on-a-chip — miniature models of human organs engineered to mimic biological functions — can reliably model human reactions to food and food-borne illnesses. The experiments will help the agency to determine whether companies can substitute chip data for animal data when applying for the approval of a new compound, such as a food additive, that could prove toxic. It is the first time that a regulatory agency anywhere in the world has pursued organs-on-chips as an alternative to animal testing.

Suzanne Fitzpatrick, senior adviser for toxicology in the food-safety division of the FDA, announced the move on 11 April in a blog post. Although the chips were designed for testing drugs, Fitzpatrick’s division wants to use them to see how individual organs process products such as dietary supplements and cosmetics. They will also be able to test how food-borne pathogens affect specific organs. FDA food-safety scientists will first evaluate the human-liver chip, before moving on to kidney, lung and intestine models.

The chips are made by Emulate, a biotechnology company in Boston, Massachusetts. The miniature organs contain multiple types of human liver cells grown on a scaffold, and continuously pump a blood-like fluid through the system to deliver nutrients and remove waste. Emulate chief executive Geraldine Hamilton says that they can also add immune system components to the chip to test how it affects liver metabolism.

“I'm excited that people are willing to try this new technology out,” says Lawrence Vernetti, a toxicologist at the University of Pittsburgh in Pennsylvania, who is developing a different kind of liver-on-a-chip. Some aspects of animal metabolism are markedly different from humans: chocolate, for instance, is toxic to dogs. Although animals are usually good models for predicting toxicity issues in humans, he says, they are not fool-proof. If the long-term goal is to reduce the number of animals used for testing, “we have to come up with a system where regulators in science will trust the answers that will come out of it”, Vernetti says.

Vernetti says that he is surprised by how quickly regulators have begun testing the devices, but he says that the decision is timely because of increasing pressure from the public to minimize the use of animals in research. In 2013, for instance, the European Union banned the sale of cosmetics that have been tested on animals. “You just can’t stop testing these things — you have to give an alternative,” Vernetti says. “These human-on-chip devices might be a nice answer.”

The announcement is a victory for animal-rights activists. “Animals don’t have to suffer through poisoning tests to improve health care for humans, and we’re thrilled that the FDA is taking action,” says Kathy Guillermo, senior vice-president of People for the Ethical Treatment of Animals (PETA) in Norfolk, Virginia, in a statement to Nature.

Still, it will be some time before organs-on-chips replace animal testing entirely. Hamilton points out that even if the human-liver chip processes a toxin without incident, there could be unforeseen effects on other organs, such as the heart. Although researchers are working towards ways to link as many as ten chips together, eliminating animal research entirely “is not in our sights right now”, Hamilton says. “We have a lot to do between now and then.”