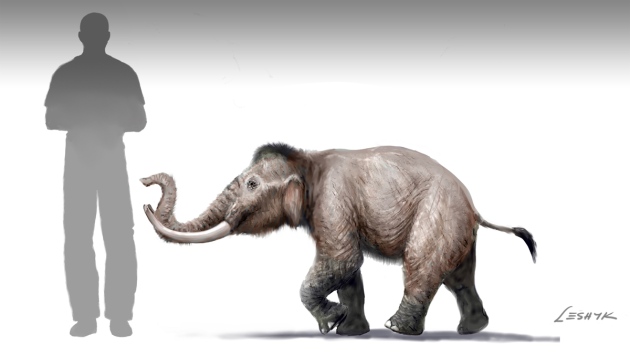 Tiny mammoths once lived on the islands of the Mediterranean.

Scientists can now add a 'dwarf mammoth' to the list of biological oxymorons that includes the jumbo shrimp and pygmy whale. Studies of fossils discovered last year on the island of Crete in the Mediterranean Sea reveal that an extinct species once thought to be a diminutive elephant was actually the smallest mammoth known to have existed — which, as an adult, stood no taller than a modern newborn elephant.

Previously, the ancient pint-sized pachyderm was known only from fossilized teeth unearthed in Crete in the early twentieth century. Even though those molars had some features that were characteristic of mammoths, the scientist who described the species at the time placed it on the elephant branch of the tree of life, mistakenly thinking that a mammoth couldn’t have co-existed on the tiny island with another known species of elephant. But reanalysing those teeth and another fossil molar found at the same site last summer revealed a distinctive pattern of ridges and loops in tooth enamel that is seen only in mammoths, says Victoria Herridge, a vertebrate palaeontologist at the Natural History Museum in London.

On the basis of the creature's tooth size, researchers already suspected that the creature was much smaller than normal mammoths, but needed a more reliable way to estimate its size. The discovery of an upper forelimb bone (or humerus) last year meant that Herridge and her museum colleague Adrian Lister could do just that. The mini mammoth probably stood about 1.13 metres tall at the shoulder and weighed around 310 kilograms, report Herridge and Lister in a paper published online in Proceedings of the Royal Society B1. “This creature would look like a baby Asian elephant, only chunkier and with curvy tusks,” Herridge says.

The researchers “have made a good argument for a dwarf mammoth on Crete”, says Larry Agenbroad, a vertebrate palaeontologist and director of the Mammoth Site, a graveyard of fossilized mammoths near Hot Springs, South Dakota. “This was a little bitty guy.”

The species, which Herridge and Lister renamed Mammuthus creticus, is the most extreme example of 'island dwarfism' yet found in mammoths. Many creatures living on islands, where resources in an ecosystem may be constrained compared to those available on a nearby mainland, evolve to develop a diminutive stature, says Herridge. Palaeontologists have previously unearthed smaller-than-normal versions of mammoths on Wrangel Island in the Arctic Ocean off northeastern Siberia and on the Channel Islands off the coast of southern California.

“Anything that gets stuck on an island can be affected” by dwarfism, says Martin Sander, a vertebrate palaeontologist at the University of Bonn in Germany. Islands scattered across the Mediterranean once played host to dwarf versions of deer, hippos and elephants, he notes. Researchers have even suggested that the small stature of Homo floresiensis, a hominin that inhabited the Indonesian island of Flores as recently as 18,000 years ago, resulted from island dwarfism2.

One popular explanation for island dwarfism suggests that in a small, isolated ecosystem, natural selection favours smaller individuals that can get by with fewer resources. “And if a species can’t shrink enough, it goes extinct,” says Sander.

But factors other than limited resources can also play a part, Agenbroad suggests. Often, he notes, islands close to the mainland become populated by good swimmers but not by their predators. In such cases, creatures that had evolved large stature as protection against carnivores on the mainland can, over the course of generations, safely drop back to a smaller size.