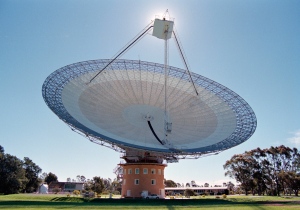 A microwave oven at the Parkes radio telescope in Australia was nabbed as the source of elusive signals.

A report1 on the surprising origins of rogue signals picked up by a radio telescope simmers on social media, while researchers on the web commented on an amazing feat of arachnid ingenuity — spinning graphene-laced silk.

After more than four years of searching, researchers using the Parkes radio telescope in New South Wales, Australia, have identified the source of some mysterious signals: a microwave oven in the facility’s break room. The news quickly spread on Twitter. Karina Voggel, an astronomy PhD student at the European Southern Observatory in Garching, Germany tweeted:

Chris Lintott, an astrophysicist at the University of Oxford, UK, tweeted:

Writing in a report published in April on the preprint server arXiv, the astronomers at Parkes described the meticulous hunt for the source of “perytons”, fleeting bursts of radio signals that have been intermittently detected by the telescope since 1998. The noise was interfering with their main mission: to understand the source of fast radio bursts (FRBs), brief and elusive signals with possible extragalactic origins.

Emily Petroff at Swinburne University of Technology in Melbourne, Australia, who is first author of the paper, says that the team knew early on that the perytons had an earthly explanation. But they nailed the kitchen appliance as the culprit when tests confirmed that the peryton signals — but not the FRBs — could be replicated by simply opening the door of the microwave as the oven was running and if the telescope was pointing in a certain direction. “We have solved the peryton mystery and increased our confidence that FRBs are real,” she says. “It’s nice to get perytons out of the way so we can focus on what we’re really interested in.”

Many researchers also picked up on a study2 about spiders that reminded some of a certain comic-book hero. A team led by Emiliano Lepore, a bioengineer at the University of Trento in Italy, sprayed 15 spiders with a water-based solution of either carbon nanotubes or graphene (atom-thick layers of carbon). Four spiders died, but some of the survivors were able to produce graphene- or nanotube-enhanced silk that was tougher than any known fibre, even surpassing Kevlar, the material widely used in bulletproof vests. The authors note that the process is not particularly practical — at least until someone finds a way to raise spiders and harvest the super silk on a commercial scale.