Using spare chemicals, a laser bought on eBay and angst from a late-night argument, physicists have got the world's first room-temperature microwave laser working.

The achievement comes nearly 60 years after the first clunky versions of such devices were built, and could revolutionize communication and space exploration. The work is published this week in Nature1. 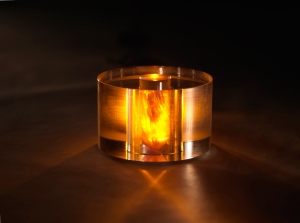 The room-temperature maser relies on a crystal of organic molecules excited with an optical laser.

Before there were lasers, there were microwave lasers, or masers. First conceived in the Soviet Union and the United States during the 1950s, early maser machines were the size of a chest of drawers. They produced only a few nanowatts of power, severely limiting their usefulness.

Because of this impediment, most in the field gave up on masers and moved on to lasers, which use the same principles of physics, but work with optical light instead of microwaves. Lasers are now used in applications ranging from eye surgery to CD players.

The poor maser lived on in obscurity. It found only a few niche uses, such as boosting radio signals from distant spacecraft — including NASA's Curiosity Mars rover. Those masers work only when cooled to less than ten degrees above absolute zero, and even then they are not nearly as powerful as lasers.

But Mark Oxborrow, a physicist at the UK National Physical Laboratory in Teddington, wondered whether a crystal containing the organic molecule pentacene might offer a breakthrough. He came across a decade-old publication by Japanese researchers2 suggesting that when the electrons in pentacene are excited by a laser, they configure such that the molecule could work as a maser, possibly even at room temperature.

Oxborrow enlisted two colleagues — materials scientists Jonathan Breeze and Neil Alford from Imperial College London — and got to work on testing this suggestion. He borrowed some spare pentacene from a lab at Imperial, and cooked it with another organic molecule known as p-terphenyl. The result was a pink crystal a few centimetres long.

Next, the team needed a powerful laser. Oxborrow located an old medical laser on eBay and drove to a warehouse in north London to pick it up. But the researchers were filled with doubts — the whole thing seemed too easy. Oxborrow admits that he was skittish about the experiment. "For about three days, I could have done it, but I didn't have the nerve to switch on that button," he says.

The final impetus came from an argument with his wife. Whereas less well-behaved people might have wallowed in the pub, "I went to the lab as a bit of therapy", says Oxborrow. "I said, 'Oh well, what the hell, let's just try it."

And it worked on the first go. 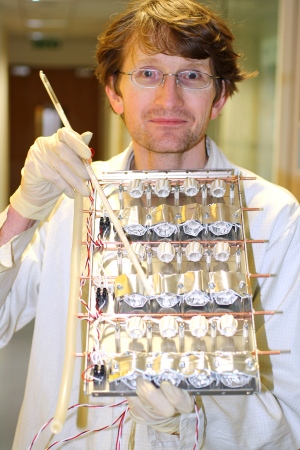 Mark Oxborrow shows off the homemade kit for purifying p-terphenyl, on the way to growing a pink maser crystal.

The laser light excited the pentacene molecules to an energy level known as a metastable state. Then a microwave passing through the crystal triggered the molecules to relax, releasing a cascade of microwaves of the same wavelength.

It was the same principle as an optical laser. "The signal that came out of it was huge," says Oxborrow, about a hundred million times as powerful as an existing maser. Alone in his lab, "I swore a lot and walked around the corridor about five times talking to myself".

"It is a considerable achievement," says Cyril Hilsum, a retired physicist who helped to develop some of the earliest solid-state lasers. "It shows great originality and great ability."

Oxborrow's device could simplify and improve masers, says Hilsum. In the long term it could find a use in communications, but it first needs to be refined.

There is plenty of room for improvement, agrees Oxborrow. Not being much of a chemist, he managed to burn the demonstration crystal as he tried to make it. "I did a bit of a crème brûlée, as it were," he says sheepishly.

Given that the singed crystal worked, he says that a more neatly made one could improve efficiency at least three fold. Hilsum adds that other tricks will be found to make the maser better. "You can be pretty sure that this is not the end of the story," he says.