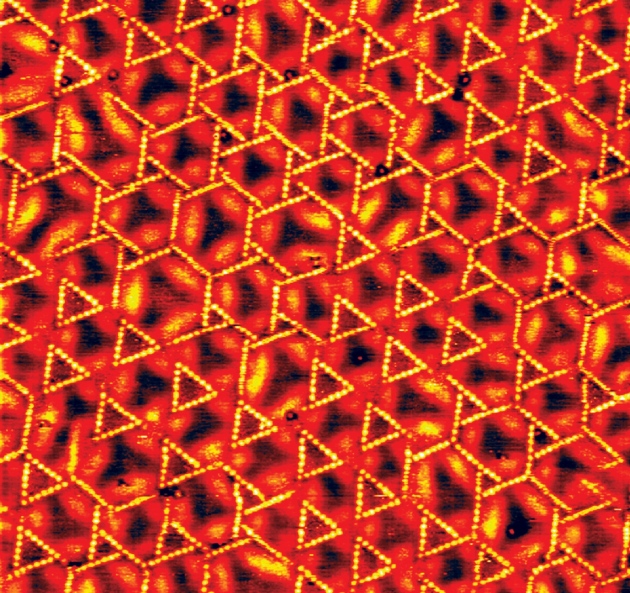 Sulphur atoms (yellow) 'dance' on a copper-layered catalyst under a scanning tunnelling microscope.

The best electron and scanning probe microscopes today can resolve individual atoms and chemical bonds1, 2, 3, 4. Views of materials such as graphene, catalysts and oxides on these scales — around 0.5 ångströms — reveal structures and the impacts of crystal defects on their properties.

To truly understand materials' chemical and physical properties, atomic arrangements need to be mapped with much greater precision. Resolutions of 0.1 Å — the goal set by physicist Richard Feynman in his 1959 American Physical Society lecture, 'There's Plenty of Room at the Bottom'5 — would take us to the physical limit of microscope vision, set by the thermal vibrations of atoms. Small structural distortions that determine magnetism, valence (the number of chemical bonds an atom can form) and spin state would become apparent.

Currently, limits inherent to electron-microscope optics restrict us to seeing atoms or columns of atoms in two dimensions. Lens imperfections, electronic instabilities, thermal noise and environmental factors also blur views. Some scientists argue that microscopes will never clear these hurdles6, 7. Others feel that because there are no materials in which atoms are spaced closer than 0.5 Å, greater resolution is not worth chasing.

We disagree. Keener microscopes are needed urgently to solve major world problems: solar, battery and fuel cells, computer memory chips and solid-state lighting all need to be more efficient. Three-dimensional (3D) maps of atoms would reveal how their interactions enable or limit functionality and, importantly, how materials can be improved.

Within a few years, at relatively low cost, researchers could improve microscope resolutions to 0.2 Å by honing aberration-corrector designs that are already available8. Stability could be improved through judicious tweaks to microscopes, materials, optics and electronics, and by reducing ambient noise. The main barrier is commercial — companies that build microscopes do not invest in specialist technologies if demand, and thus financial return, is expected to be low.

Exceeding atomic resolution is crucial for understanding important classes of materials such as superconductors, magnets and catalysts. It is often the small deviations from symmetry in atom positions that allow materials to store charge, information or energy — for example, in ferroelectric oxides used in computer memory chips or electrocatalytic oxides used in solid fuel cells. The complex atomic arrangements of nanophase metals, ceramics, alloys, solar cells, batteries and different types of glass have yet to be probed.

Interfaces between different materials — such as magnet–superconductor or oxide–oxide junctions — might exhibit properties such as electrical conductivity, chemical reactivity, superconductivity and ferromagnetism that are not found in their separate constituents. More-exact measurements of bond lengths and angles, ideally in three dimensions, are needed to hone materials for use in next-generation energy and information-technology devices.

Aberrations are inherent in electron lenses, which use magnetic fields and which, unlike glass lenses, cannot be shaped to arbitrary curvature. As in a camera, opening the aperture reduces the depth of field but also increases depth resolution. At today's practical resolution limit of 0.5 Å, the limited apertures available restrict depth resolution to the nanometre scale, which is too coarse to discern individual atoms.

Lateral resolution at Feynman's level would allow us to distinguish atoms vertically. No longer would specimens need to be aligned to their internal crystal planes. One image would reveal a cross-section. A series of images taken using different foci would build up a 3D scan. Seeing atomic positions in three dimensions could distinguish between competing theories for a material's behaviour.

Such scans, like today's imagery, would have to be limited so that the sample is not destroyed by the electron beam. And biologists will have to take images using shorter, lower-current scans than can be used for materials. Researchers will need to learn new tricks, but the pay-off would be huge. As resolution improves, noise reduces, and we will be able to scan faster and monitor how things change with time.

Other types of microscopy would also be improved with higher resolution. Electron energy loss spectroscopy (EELS) would benefit from 3D capability to reveal elements, chemical valence and energy band levels at the same time as atomic structure. 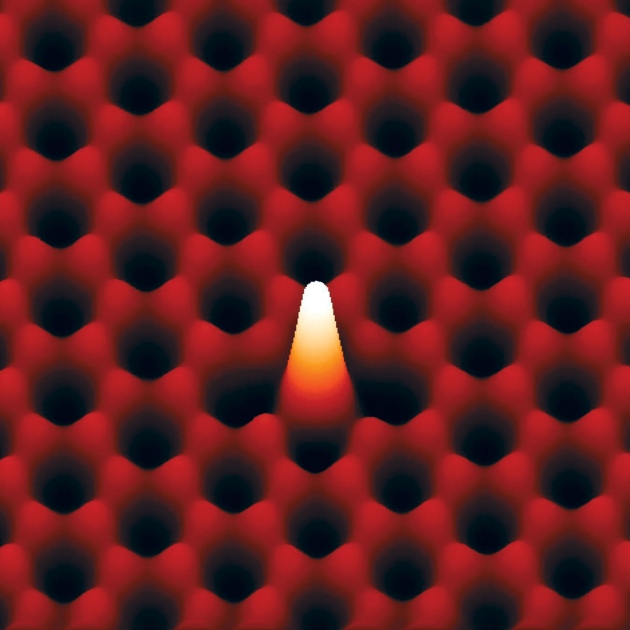 A scanning transmission image reveals a silicon atom in a layer of graphene.

In scanning probe microscopy (SPM), an image forms as a result of interaction between a sharp probe tip and the sample surface. Measuring the current between the two, as in scanning tunnelling microscopy, or the minute forces, as in atomic force microscopy, traces the structure of the surface. Although the maximum resolution achievable is limited by the fundamental physics of tip–surface interactions, new low-noise systems will allow mapping of displacements of surface atoms and changes in bond lengths to less than 10 picometres.

By probing electronic, phonon (vibrations in a lattice) and spin responses with SPM, we will better understand the factors that control the ferroelectric, magnetic and superconductive functions of materials. By tuning the force and current applied through the probe tip, atoms and molecules could be manipulated and their chemical and electrochemical responses explored away from equilibrium.

Improved energy resolution would enable physicists to map energy band gaps and phonons in materials for solid-state lighting, thermoelectrics and solar cells using EELS9. This resolution could be achieved using advanced electron optics such as monochromators that narrow the energy spread of the electron beam from today's 300 millielectronvolts to 10 millielectronvolts or less. SPM provides information on local superconductivity, energy band gap and molecular vibrations or phonon structure.

For electron and scanning-probe microscopy, additional signals, such as emitted light or electronic current, could be collected simultaneously. From this, one could test whether particular lattice defects kill or enhance the effectiveness of solid-state lighting or solar cells, how a molecule interacts with the substrate, or how local polarization gradients affect oxidation states and magnetic properties in ferroelectrics and polar materials.

To achieve Feynman's goal, microscope optics and electronic and mechanical stability must be improved. We need new designs for correctors with larger apertures.

A main problem is a lack of awareness among scientists of how much can be gained from even higher-resolution microscopy. With aberration correctors selling well (hundreds each year), there is little incentive for manufacturers to develop new capabilities. The low-noise scanning probe microscopes used for cutting-edge studies are largely lab-built.

Significant further investment will be necessary to deliver a factor-of-two improvement in spatial resolution in electron microscopes within five years, just as multimillion-dollar government-funded projects in the United States and Japan have led to the previous factor-of-two resolution increase in the past decade. As was the case with today's aberration-corrected machines, the new state-of-the-art microscopes would soon become available, at a probable cost of between US$5 million and $10 million each.

One of the pathways to achieving this goal is through community-wide workshops to construct a road map for instrumental developments and identify scientific opportunities. The crucial transition from taking images to acquiring detailed information on atomic positions, bond lengths and local functionalities will require new methodologies. Large, multi-dimensional data sets will pose challenges for data collection, storage and analysis. New approaches will be needed for extracting relevant knowledge and linking it to theory.

The scientific community should set up centres to host and coordinate the high-power computing services needed to support high-resolution microscopy. Shared online environments will foster collective interpretation. By pooling data, fewer experiments would have to be repeated, providing the experimental counterpart to other programmes sharing analytical tools, such as the $100-million US Materials Genome Initiative.

To paraphrase Feynman: there's still plenty to see at the bottom.