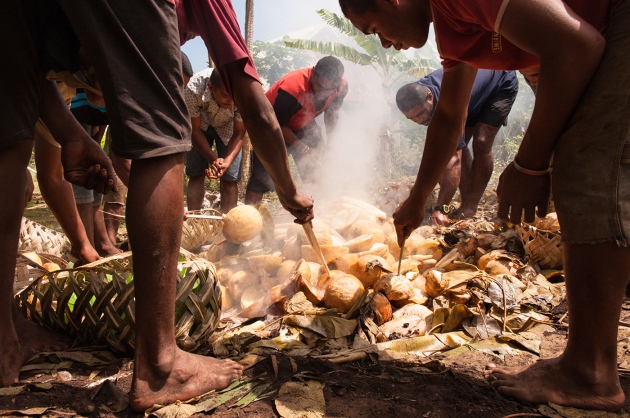 Men in a village in Fiji cook vegetables for a funeral feast.

To understand how microorganisms and their genes traverse the globe, Ilana Brito maxed out her own credit card, bought dewars of liquid nitrogen to preserve her samples, and flew to Fiji. Brito, who is now a microbiologist at Cornell University in Ithaca, New York, and her colleagues sampled microbes from the hands, saliva and faeces of people in five villages to map the spread of microbial genes across the villagers' social networks.

The long-awaited results of this project are published this week in Nature1. The study suggests that day-to-day interactions between people can affect the transfer of genes in the human microbiome — between and across species of microorganisms that thrive in the body. This ongoing exchange of genes could help to reveal how an individual’s microbiome influences his chance of disease, and why some populations seem to be more susceptible to certain disorders.

Brito and her colleagues compared the microbiomes of 172 Fijians with those of 81 North Americans, surveying thousands of mobile genes for evidence of transfer across populations. Bacteria readily swap genetic information with their neighbours, even across species — a process that can make an organism more or less virulent, or confer resistance to a particular antibiotic.

The scientists also sequenced individual cells to see the entire set of genes within, and to identify which elements on a given gene are mobile. And the team analysed genetic material from the cheek swabs, saliva and faecal samples collected from each village in Fiji.

The result is a massive trove of genetic data — the first sequencing effort of this scale to document a developing-world microbiome.

Focusing on a relatively isolated island population had several advantages. “These people tend to stick around in the same villages — everything is local,” Brito says of the Fijians. These small, relatively contained populations helped to simplify the social networks that researchers sought to map. The Fijian villages also had a greater diversity of microbes compared to Western cultures that have largely eliminated bacterial pathogens through hygiene, antibiotics and sanitation infrastructure, Brito says.

Previous studies have shown that an individual’s microbiome is more or less stable, and that any shifts in its composition — caused by factors such as diet or drug use — can affect a person’s susceptibility to disease. But scientists know little about how microbial genes spread across geographic regions or human populations, and what selective pressures hasten their spread globally.

Brito’s study illuminates one likely selective pressure: diet. Her team found that Fijians are more likely than North Americans to harbour microorganisms that contain plant-based genes to help digest starch — in what seems to be a consequence of differing dinners.

And although genes for dietary enzymes and the overall composition of the human microbiome remained similar at the population level, the study pinpointed differences in these mobile gene pools between neighbouring villages. This suggests that highly localized cultural and environmental changes play a part in shaping microbial communities.

Understanding how mobile gene elements travel could also help scientists to better understand the spread of genes that confer antibiotic resistance to drugs such as colistin, an antibiotic of last resort, for instance.

Brito’s project is unique in the scope with which it examines the microbial genes of individuals and villages, says Jack Gilbert, a microbiologist at the University of Chicago in Illinois.

Because mobile genes differ from village to village, Gilbert says, it’s possible that routine social interactions — such as sharing a meal — alter the microbiome function, even if they don’t necessarily change the types of bacteria colonizing a person. These differences, he says, could help scientists to understand why certain populations are more susceptible to certain diseases — such as the high prevalence of asthma and food allergies among the Hutterites, a North American religious community similar to the Amish.

The study is also a testament to Brito’s perseverance. The US National Institutes of Health initially rejected her Fiji proposal as too ambitious, although the agency later contributed funding to have the samples sequenced. Determined to proceed, she paid for a trip to Fiji with a staff of four; at one point, she enlisted her mother to label sample tubes.

For now, Brito continues to analyse the data she collected in Fiji — but she is also considering a return trip, to further explore the unseen world of the microbiome.