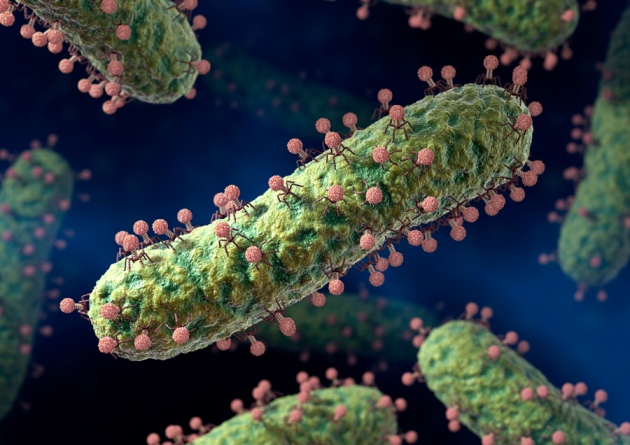 Recoding could stop synthetic organisms from sharing their modified DNA, as happens when a virus (red) infects a bacterium (green).

The instructions encoded into DNA are thought to follow a universal set of rules across all domains of life. But researchers report today in Science1 that organisms routinely break these rules.

The finding has implications for the design of synthetic life: by designing organisms that break the rules, researchers may be able to make novel life forms resistant to viral infection. Making these organisms also been proposed as a way to stop synthetic life forms from infecting unintended hosts. Widespread exceptions to these rules, however, could make it difficult to engineer organisms that will not pass on their DNA to those in the wild.

“This study highlights the malleability of the genetic code,” says bioengineer Farren Isaacs at Yale University in West Haven, Connecticut.

Researchers led by Edward Rubin at the US Department of Energy’s Joint Genome Institute in Walnut Creek, California, went looking for such rule-breakers in the DNA and RNA of microbes from 1,776 places, including 17 locations in the human body. They were hunting for 'recoding' events — instances in which the microbe interprets the genetic code differently from the way most organisms do.

The team looked specifically for events in which stop codons — genetic sequences that normally tell an organism to finish making a protein — instead send a 'go' signal, telling the organism to add another amino acid to the growing protein.

From stop to go

The team first asked what proteins would be encoded by stretches of genetic code at least 1,000 bases long if the organism were using the traditional stop command. If those proteins were abnormally short, the researchers then looked at whether the microbe might actually be interpreting a stop codon as an amino acid. This seemed to be the case in 31,415 samples, and in as many as 10% of the sequences taken from some environments.

Microbes found in humans were particularly prone to recoding. Although only 10% of the samples came from the human body, more than half of the recoded codons came from these locations.

Rubin says that recoding has been seen in nature, but not at this level because most studies have focused on microbes that can be grown in a lab. “When we took this approach and looked outside the lab and asked, ‘Is this the rule?’, the rules broke down,” he says.

Synthetic biologists have been using recoding to allow organisms to make new kinds of amino acids with new properties2. They also hope to use it as a way to stop designer organisms from sharing their modified DNA with other life forms. For instance, viruses hijack their host's cellular machinery to make more copies of themselves. But this might be more difficult if the virus and host interpret the code differently.

By allowing scientists to engineer recoded microbes that can't exchange genetic information with natural ones, recoding has the potential to make a big impact in biosecurity, says Isaacs, who spent six years recoding one of the stop codons in an Escherichia coli bacterium to incorporate a synthetic amino acid into its proteins2. Rubin’s study, however, found that in some environments — in the human mouth, for example — bacteria are infected with viruses that seem to have incompatible coding. “It suggests that we should be more careful if we really want to make a firewall,”  Rubin says.

But George Church, who is leading an E. coli recoding project3 at Harvard University in Cambridge, says that because synthetically recoded organisms leapfrog evolution and are not exposed to continual evolutionary pressures, they will not be vulnerable to the same type of genomic hijacking that seems to allow natural viruses to infect differently recoded forms of life.

“If you change a genome radically while the virus is 'not looking'”, says Church, “then the number of changes needed to be correct simultaneously can be larger than any viral population that could fit on Earth.”