Researchers travel to the submerged Yucatan cave where divers found the remains of an ancient girl and 26 other large mammals, including a saber-toothed tiger.

The near-intact skeleton of a delicately built teenage girl, who died more than 12,000 years ago in what is today’s Mexico, could help to solve the riddle of how the Americas were first populated.

Cave divers discovered the skeleton seven years ago in a complex of flooded caverns known as Hoyo Negro, in the jungles of the Yucatan Peninsula. They called her Naia, after the naiads, the water nymphs of Greek mythology. She lies in a collapsed chamber together with the remains of 26 other large mammals, including a sabre-toothed tiger, 600 metres from the nearest sinkhole. Most of the mammals became extinct around 13,000 years ago.

Analysis of the remains, most of which are still lying in the submerged cave where they were found, suggests that modern Native Americans are the descendants of the earliest Palaeoamericans, who migrated from Siberia towards the end of the last glacial period. An alternative theory held instead that a mysterious, more recent influx had brought in new populations from Eastern Asia. 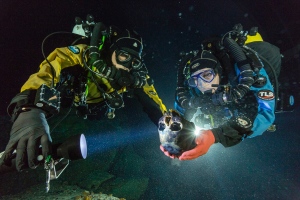 Divers Alberto Nava and Susan Bird had to examine Naia's skull underwater to create a 3-D model (see video below).

“Naia, and the other animals, would have slipped through a hidden sink hole and fallen 30 metres into a shallow pool,” says palaeontologist James Chatters of Applied Paleoscience in Bothell, Washington, who led the study, published today in Science1. “There would have been no way out.” The broken pelvis of Naia’s otherwise near-perfect skeleton is likely a result of the fall, he says.

It was impossible to safely recover the body from the cave location, so the research team dove to the cave and made bone measurements in situ. They placed Naia’s skull on a rotating tripod, and set a camera on a second tripod next to it. Turning the skull slowly, they snapped pictures every 20 degrees. Later the team used the photographs to reconstruct a three-dimensional image (see video at bottom).

Naia, they calculated, was approximately one and a half metres tall. Her skull, with its small, projecting, angular face and pronounced forehead, was similar to those of the earliest fossils of Paleoamericans dating from more than 10,000 years ago, most of which have been found in the Pacific Northwest. Her teeth and bone development suggest she was 15 or 16 years old.

The divers also recovered two teeth, a rib and sample of mineral deposits that had grown onto the surface of the bones. Using two independent methods to date the remains, the authors carbon-dated the tooth enamel and measured the ratio of uranium and thorium in the mineral deposits. Naia must have been between 12,000 and 13,000 years old, they concluded. The mitochondrial DNA for their genetics analysis came from one of her teeth.

“It helps support the consensus view, from archaeological, genetic and linguistic evidence, that the Americas were initially peopled 15,000–20,000 years ago from Siberia,” says human geneticist Chris Tyler-Smith from the Wellcome Trust Sanger Institute near Cambridge, UK.

According to this widely held theory, the Americas were populated by Siberian ancestors who crossed the Bering land bridge that back then linked Eurasia and Alaska. The migration is thought to have started during the Pleistocene ice age — which ended around 14,000 years ago — and continued over the next several thousand years as these populations moved south.

Palaeoamerican remains are few and far between, because the nomadic tribes did not always build tombs for their dead. This is the first full skeleton to be found, and the first major set of remains to be unearthed so far south.

The authors created this 3-D model of Naia's skull after scanning it underwater, in the submerged cave were it was found.

Model by Corey and Ann Jaskolski based on photographs by Roberto Chavez Arce; video by Ingemar Lundgren.