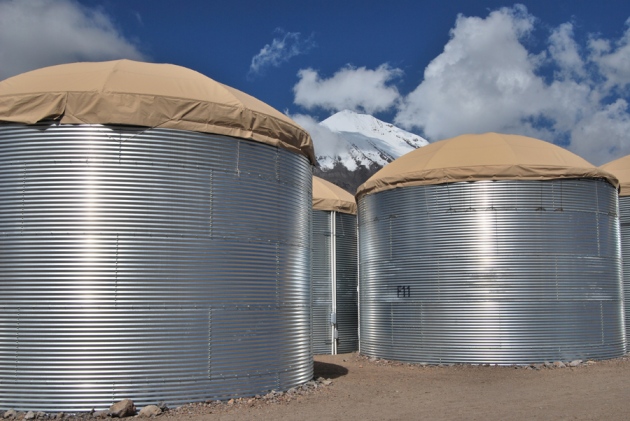 The corrugated-steel detector tanks at the High-Altitude Water Cherenkov Observatory in Puebla, Mexico, each hold 180,000 litres of water to catch the debris of cosmic rays and γ-rays that have smashed onto the upper atmosphere above.

After a three-hour drive southeast of Mexico City, past farmers using horse-drawn ploughs and through a village with sheep crowding the main street, the dirt road on Sierra Negra mountain splits at 4,000 metres above sea level. To the right is Orizaba, North America's third-highest peak. To the left is a new observatory that will be hunting for the highest-energy sources known in the Universe.

When finished in autumn 2014, the High-Altitude Water Cherenkov Observatory (HAWC) in Puebla state will have a tight array of 300 barn-sized tanks, covering a total of 20,000 square metres. Already, more than one-third of the tanks are taking data, mapping higher-energy cosmic and γ-rays than similar observatories could detect before.

"We're getting to the limit of the most energetic γ-rays," explains Magdalena González, a HAWC science coordinator and a high-energy astrophysicist at the National Autonomous University (UNAM) in Mexico City. Just as the discovery of cosmic X-rays opened up research into black holes and neutron stars, γ-rays offer insights into supernova explosions, neutron star collisions, the black holes of galactic nuclei and other violent celestial outbursts. "We're learning about the highest, most powerful accelerators in the Universe," says González. 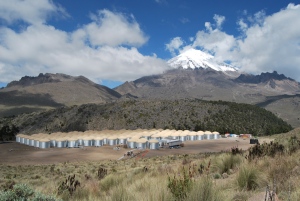 Still under construction, HAWC lies in the shadow of Pico de Orizaba — Mexico's highest mountain — at 4,100 metres above sea level.

Like other Earth-based high-energy observatories such as MAGIC in La Palma, Canary Islands, HAWC does not detect the particles directly but rather observes their effects on the atmosphere. When a cosmic ray (typically a proton or a heavier atomic nucleus) or a γ-ray (a high-energy photon) collides with a molecule in Earth's atmosphere, it creates charged particles that start a chain reaction, cascading into a particle shower.

When these secondary particles reach Earth’s surface and zip through one of HAWC's tanks, they travel through the water faster than does light. (In water, light trudges along at three-quarters of its speed in a vacuum.) The incoming particles excite the water molecules, which then emit photons as they return to their ground state. This optical phenomenon, in which a particle moves faster than the light cone it creates in its wake — much like a sonic boom in acoustics — is called Cherenkov radiation, and HAWC's tanks are known as Cherenkov detectors.

Each tank is filled with 180,000 litres of water in a corrugated steel cylinder, lined with a water-tight bladder that also keeps the inside dark. At the bottom of the tank, four sensors count every photon of Cherenkov radiation.

By noting the pattern of Cherenkov light, researchers can calculate the energy and direction of provenance of the original γ-ray. The array is expected to detect about 20,000 cosmic rays and a few γ-rays every second in the range of 0.1–100 teraelectronvolts (TeV).

This section of the electromagnetic spectrum could carry γ-rays that are predicted to be a product of annihilating collisions between dark matter particles, says particle astrophysicist Brenda Dingus, the HAWC spokesperson at the Los Alamos National Laboratory (LANL) in New Mexico. She also notes that the observatory's precision might reveal tiny differences the velocities of high-energy photons emanating from distant sources — a key prediction of some attempts to unify Einstein's theory of gravity with quantum mechanics.

HAWC's features make it suitable to complement existing detectors, says Paul Mantsch, a particle physicist at Fermilab in Batavia, Illinois, and the former project manager at the Pierre Auger Observatory in western Argentina — the largest cosmic-ray observatory in the world. Although its angular resolution is less than that of conventional telescopes, with its ability to map half the sky every 24 hours, "HAWC can take a bigger, broader image of the sky”, says Mantsch. The new observatory will thus spot events that are too brief to be caught by swivelling telescopes or, when there is enough time, it will enable those other instruments to zero in on the source and image it with their sharper view, Mantsch says.

Some 150 researchers are involved in the project. At less than US$14 million, HAWC's modest startup cost owes in part to the existence of infrastructure of its neighbour 500 metres up the mountain, the Large Millimeter Telescope. HAWC also has reused sensors, electronics and other equipment from LANL’s Milagro Gamma-Ray Observatory, which closed in 2008.

More than one-third of the tanks are now taking data, and the team expects HAWC to be fully operational by autumn 2014.