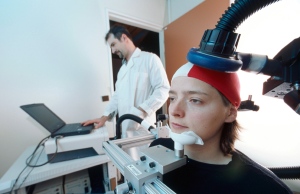 Electromagnetic pulses can be used to generate a diagnostic measure of consciousness.

In most people, the line between consciousness and unconsciousness is as clear as day. But in many people with brain injuries who can neither talk nor move, the differences can be harder to spot.

Neuroscientists have now devised a single metric of brain activity that could help to distinguish between different states of consciousness and guide medical treatment for people with brain injuries. The work is reported today in Science Translational Medicine1.

“Nothing else we have can do that reliably,” says Joseph Giacino, director of rehabilitation neuropsychology at Harvard Medical School’s Spaulding Rehabilitation Hospital in Boston, Massachusetts. “This is a very significant study.”

The metric relies on the idea that consciousness involves widespread communication between different areas of the brain, with each region performing specialized functions. Loss of consciousness during sleep or anaesthesia, or from brain injury, may be caused by the disengagement of brain regions from one another.

Neurophysiologist Marcello Massimini of the University of Milan in Italy and his colleagues, who carried out the latest research, have found that electromagnetic stimulation of conscious people’s brains sets off a cascade of activity and generates unique responses in different brain regions. In unconscious people, however, the activity either fails to spread, or there is little variation in the responses from different brain areas.

In the latest study, the researchers present a mathematical measure to quantify the extent and richness of response to the stimulus — a mild electromagnetic pulse applied through the scalp. They applied the technique to 52 people in Italy, Belgium and the United States between 2005 and 2009.

In healthy participants, the metric was high during wakefulness, but was cut by about half during anaesthesia-induced unconsciousness and in some stages of sleep. The metric was similarly low for people clinically diagnosed as vegetative — wakeful, but unaware and unresponsive. For the two study participants diagnosed with locked-in syndrome, who were fully aware but able to respond only minimally, the metric was high. And people with brain injuries who were diagnosed with intermediate states of consciousness fell between the two extremes.

These distinctions could help physicians to determine when and how aggressively to pursue different treatment options. The metric could also be used to monitor how well treatments are working, explains Massimini. “That one number tells you how the brain’s doing,” he says.

None of the people with brain injuries recovered during the course of the study, so researchers could not determine long-term changes in the measure. But in some of the healthy participants, the measure was used to track changes between wakefulness and varying degrees of sedation induced by anaesthetic. Massimini says that the next step will be to try the technique with more injured people over a longer time period, to see whether the metric can chart the recovery of consciousness.

Adrian Owen, a neuroscientist at the University of Western Ontario in London, Canada, has pioneered the use of functional brain imaging to diagnose levels of consciousness in people with brain injuries, but his technique requires the use of magnetic resonance imaging and the active concentration of the patient. He says that Massimini’s method is easier to apply, and does not require anything of the patient. “This looks very exciting,” says Owen.