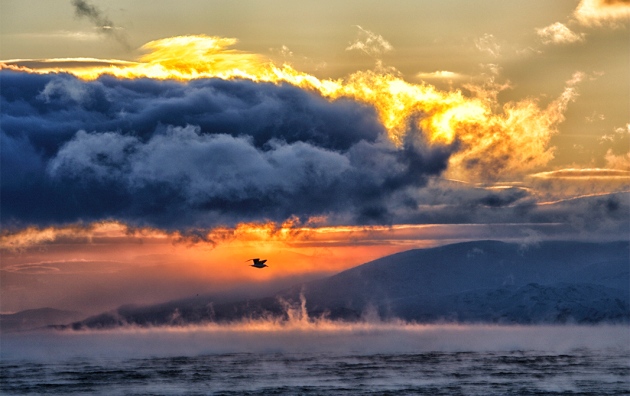 The Barents Sea, on the edge of the Arctic Ocean. Methane exploded from beneath the sea-floor here thousands of years ago.

Huge craters in the floor of the Arctic Ocean are the collapsed remains of methane domes which exploded after the last Ice Age as the glaciers above them retreated, research suggests. Even now, some 11,600 years after the last gas domes burst, methane is still seeping out of the sea floor.

The methane explosions, which created craters up to 1 kilometre wide in an area that was once solid ice, but is now the northern Barents Sea off the coast of Norway, are not merely a geological curiosity. “These are processes that could take place in front of contemporary ice sheets,” says Karin Andreassen, a marine geologist and geophysicist at the Centre for Arctic Gas Hydrate, Environment and Climate in Tromsø, Norway, who led the study, published in Science1. Methane is a potent greenhouse gas, so it is tempting to speculate that large seafloor explosions might contribute to global warming. But so far there is little evidence for this, as it is not clear if the gas reaches the atmosphere.

Craters and smaller pockmarks have been spotted on sea floors around the world, but it’s not always clear what causes them. To investigate, Andreassen and her team revisited a cluster of craters discovered in the 1990s, which researchers had already suggested may have been created by the retreat of glaciers2, 3. Using high-resolution sonar surveys, the team identified around 100 craters that were at least 300 metres wide, as well as hundreds of smaller ones, in the space of 440 square kilometres.

The team also discovered mounds in the sea floor — known as pingos — created by methane gas that has pushed towards the surface. Seismic data revealed fractures in the sea bed and identified deep sources of hydrocarbons that could feed the area. Acoustic surveys show that methane is still seeping into the sea from around 600 spots.

“The data set is beautiful,” says Carolyn Ruppel, a geophysicist who heads the US Geological Survey’s Gas Hydrates Project in Woods Hole, Massachusetts. Ruppel says the Norwegian team tied things together by simulating the evolution of the area with a detailed ice-sheet model. “I think they really have nailed this area very well.”

The ice sheet covering what is now the Barents sea was around 2 kilometres thick at the height of the last glacial era, around 23,000 years ago, and its weight put pressure on the underlying floor. At the time, methane gas in the crust would have been squeezed into methane hydrates — deposits in which methane molecules are trapped in lattices of water ice. Hydrates are still common along many continental shelves.

The hydrates beneath the Barents Sea were stable until the glacier began to retreat some 17,000 years ago, when falling pressure enabled methane to flow towards the sea-floor surface. This flow of methane created pingos, many of which would eventually burst.

It remains unclear whether gas from the sea floor would have actually made it into the atmosphere, where it could contribute to global warming, says John Kessler, an oceanographer at the University of Rochester in New York.

Kessler has found, for example, that microbes in the deep ocean consumed the methane released during the 2010 Deepwater Horizon spill in the Gulf of Mexico4, 5. “The release of methane from the sea floor, even catastrophically, should not inherently imply a release to the atmosphere,” he says.

Andreassen’s team has yet to calculate how much methane would have been released during this period, but she says the blowouts must have been powerful to create such massive craters. That increases the odds that some of the methane might have made it into the atmosphere, she says.