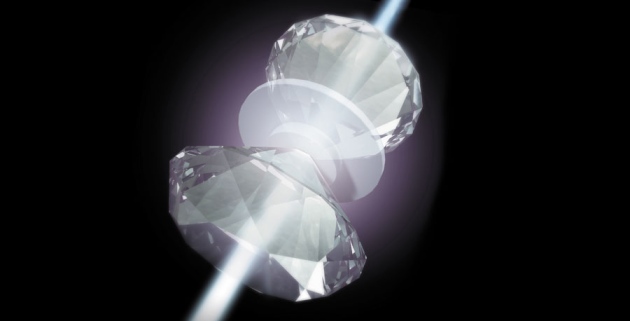 Samples crushed between two diamonds can be probed with lasers.

Mikhail Eremets and Ivan Troyan work only with the very best, gem-quality diamonds. Nothing else can handle the stresses involved — not when the two physicists make a habit of forcing the diamonds' tips together until the pressure between them reaches levels normally found at the centre of the Earth.

Eremets and Troyan, both at the Max Planck Institute for Chemistry in Mainz, Germany, are not alone in this strange pursuit. Their apparatus, known as a diamond anvil cell, is a standard fixture in high-pressure research labs. But they have provoked widespread agitation in their research community by claiming to have crushed hydrogen in their cells until it gave up being a diatomic gas, and instead became a shiny, presumably monatomic, solid that conducted electricity like a metal.

The arguments over this alleged discovery — one of the most sought-after results in high-pressure research — have been raging ever since Eremets and Troyan published their results last November1. “We could just read their paper and say it was wrong,” declares condensed-matter physicist William Nellis, an associate of Harvard University's physics department in Cambridge, Massachusetts, and one of the team's most vocal challengers2.

But others, such as Raymond Jeanloz, a planetary scientist and high-pressure-materials researcher at the University of California, Berkeley, are keeping an open mind. Whether Eremets and Troyan are eventually proved right or wrong about metallic hydrogen, Jeanloz says, “what I feel is beautiful about their work is that they did a bazillion different experiments at these extreme conditions. They lit a fire under a couple of research groups.”

On 26 June, the main figures in this controvery will gather in Biddeford, Maine, during a Gordon Research Conference on high-pressure science. The result could be a meeting of minds — or a display of fireworks. “This is a very intense field,” says Jeanloz. High-pressure scientists have been trying — and failing — to make metallic hydrogen ever since theorists first predicted its existence in 1935 (ref. 3). Anyone claiming success can expect an all-out critique from rival groups — especially considering what is at stake.

Not only would making metallic hydrogen in the laboratory allow researchers to do planetary science at the bench — gas-giant planets such as Jupiter, or the even larger ones being discovered around distant stars, are thought to have huge amounts of the stuff in their interiors — but it could point the way towards an entirely new world of high-pressure phenomena.

“Hydrogen is the simplest atom, the simplest molecule and perhaps the most complicated elemental solid,” says Arthur Ruoff, a high-pressure physicist at Cornell University in Ithaca, New York. In 1968, Cornell physicist Neil Ashcroft predicted that solid metallic hydrogen might be a superconductor4. In 2004, calculations5 by Ashcroft and others suggested that, under certain combinations of pressure and temperature, hydrogen atoms would rearrange themselves into a new kind of quantum liquid with attributes of both superconductors, which conduct electricity without resistance, and superfluids, which flow without resistance.

Such exotic behaviours become particularly interesting if some of these phases of hydrogen turn out to be metastable. This would mean that the phases could retain their high-pressure forms for an indefinite period once external forces are removed, much as diamonds formed by high temperatures and pressures deep inside Earth remain diamonds even after they reach the surface, instead of immediately reverting to carbon's more stable form, graphite. Nellis and others have imagined a host of applications for metastable metallic hydrogen, ranging from super-lightweight structural materials that would allow entire cities floating on the sea to be built, to rocket fuel that packs nearly four times as much propellant power per kilogram as the liquid hydrogen used in the most powerful rockets today6.

First, however, comes the reality check. Diamond anvil cells can use only vanishingly small sample sizes. (The volume of Eremets and Troyan's hydrogen samples was about 160 cubic micrometres — somewhat smaller than an average human cell.) High-pressure experiments are fraught with the potential for error. And even the most experienced researchers run the risk of fooling themselves. The question is whether Eremets and Troyan are among them.

In their experiments1, the Mainz physicists started with pairs of brilliant-cut diamonds. They trimmed each of the diamonds' points into a flat surface, or culet, 20–30 micrometres across, then aligned the diamonds with those truncated tips almost touching, on either side of a piece of metal foil pierced with a culet-sized hole that would enclose a minuscule experimental chamber.

Through a gem darkly

For each experiment, Eremets and Troyan loaded hydrogen gas into the hole, and started tightening a set of screws that forced the diamonds closer together. As the culets bit into the foil at the rim of the hole, the metal deformed around them to form a seal trapping the hydrogen. And as the force exerted by the screws was focused down onto the culets, the pressure in the chamber began to skyrocket. 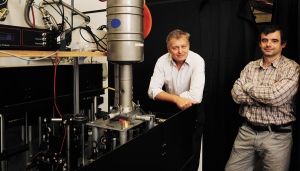 Mikhail Eremets (left) and Ivan Troyan stand by the apparatus they used to create what they believe to be metallic hydrogen.

This is where high-pressure experiments often go awry. Although the anvil's diamond jaws are made of one of the hardest materials known, superpressured hydrogen routinely infiltrates them, making them brittle and causing the gems to crack like cheap plastic cups. This also spoils the gemstones' transparency, stopping the physicists from seeing what is happening in the chamber. Eremets and Troyan addressed that problem by applying semi-transparent coatings to protect their diamonds from the infiltration of hydrogen. But even so, they went through about 100 pairs of diamonds as they worked out the bugs of their apparatus and ran trials and controls.

When the pressure inside their anvils reached 200 billion pascals (200 GPa), or about 2 million times Earth's atmospheric pressure at sea level, the two Mainz physicists saw spectroscopic signs that the diatomic hydrogen molecules had begun to interact in a way that signalled that they were becoming a solid.

At 220 GPa, the sample chamber became dark, another sign that hydrogen had apparently assumed a condensed phase. Eremets and Troyan found that laser pulses fired through the transparent diamond triggered small flows of electrons that they could detect by means of copper and gold electrodes deposited on the culet surfaces — behaviour characteristic of semiconducting materials, in which electrons need a small energy kick to flick them out of orbit around atoms and into a conductive flow.

At 240 GPa, Eremets and Troyan recorded small currents even without the laser shots, an indication that room-temperature thermal vibrations alone could nudge the electrons into a conductive mood.

And at about 270 GPa, the researchers saw their samples' electrical resistance suddenly drop by several orders of magnitude, just as their spectroscopy was showing that the hydrogen's molecular vibrations were slowing down and morphing in ways suggestive of a phase transition — and the samples were becoming shiny like a metal.

“It is hard to sit on data like these,” says Eremets. He and Troyan are convinced that their findings are at least consistent with having made metallic hydrogen.

But others are not so sure. Sceptics note that pitfalls are everywhere in experiments such as these. If an experimenter peers through the diamonds and sees the sample begin to darken, for example, that may mean that it is becoming a solid — or that the hydrogen is reacting with the foil or other impurities to form metal hydrides. If odd electrical signals start coming in from the culet electrodes, they may indicate the formation of a new phase of hydrogen — or that the diamond jaws are deforming, causing the electrodes to short out or emit spurious signals. Eremets says that he and Troyan are well aware of such pitfalls, and did their best to avoid them. Nonetheless, says Ruoff, “I don't know anybody who thinks their claim is valid”.

“Our measurements are not perfect, but metallic hydrogen remains a viable interpretation.”

One fact that troubles Ruoff and other critics is that the resistance rises as the sample's temperature drops. This is contrary to normal metallic behaviour, in which the resistance goes down as the temperature does. But when reviewers of the paper raised that issue, says Eremets, he successfully argued that the upward trend is consistent with that seen in a disordered metal, in which the atomic structure is more like that of a glass than a crystal.

Russell Hemley, a high-pressure-materials researcher at the Carnegie Institution of Washington in Washington DC, is sceptical of Eremets and Troyan's claims for another reason: if the hydrogen really becomes metallic, then the shininess that the Mainz team reports at optical wavelengths ought to be accompanied by equally strong reflectivity at infrared wavelengths. Eremets and Troyan were not able to get good infrared data on their samples. But Hemley says that in his own experiments with hydrogen at similar pressures, “we see it transmitting” in the infrared. Moreover, in a paper published in April7, Hemley and his colleagues report signs that hydrogen squeezed up to 360 GPa holds on to its diatomic character and fails to morph into a monatomic metal. Adding to the complexity of the situation, some theorists suggested8 that, if squeezed enough, even intact hydrogen molecules might develop a new and crowded bonding pattern that could have metallic properties.

Eremets and Troyan are standing their ground. “Our measurements are not perfect,” Eremets concedes, but he insists that “metallic hydrogen remains a viable interpretation”. He points to a paper published in March9 by Eugene Gregoryanz, a physicist at the University of Edinburgh, UK, and his colleagues. “They observe a new phase, the same Raman spectra and a darkening of the sample” at around 220 GPa, says Eremets. Clearly, he argues, something is happening at that point — although Gregoryanz and his colleagues attributed the changes to formation, not of metallic hydrogen, but of a previously unseen, graphene-like phase of molecular hydrogen.

In an effort to clarify the situation, Eremets and Troyan travelled to Villigen in Switzerland in late April, to gather infrared spectra using the synchrotron light source at the Paul Scherrer Institute there. The data could reveal vibrations in the lattice structures of high-pressure hydrogen samples that would help theoreticians to identify specific structures of any solid phases that might be present, Eremets says. Such structural information would not, by itself, prove that the hydrogen had become metallic. But Eremets and Troyan also plan to attempt more thorough and extensive electrical measurements, which could prove conclusive.

Looking back, Eremets admits that he and Troyan probably should have been more circumspect in their paper — conveying the message that they might have made metallic hydrogen, rather than claiming more strongly that they had done so, as they did in their abstract and their concluding paragraphs.

Meanwhile, the race for metallic hydrogen continues, as other high-pressure research groups pursue their own experiments. Jeanloz points out that many members of this community, himself included, have mingled over the years as collaborators, postdocs, supervisors and mentors, only to go on to become each other's staunchest critics and rivals, unlikely to let the slightest chink in an argument go unchallenged. What emerges from this dynamic, say Jeanloz and others, is a creative tension that could eventually force those who claim to have produced metallic hydrogen to do enough experiments, with enough controls, to compile enough lines of evidence to convince even the pickiest of critics. Until then, the trophy seems to be up for grabs.