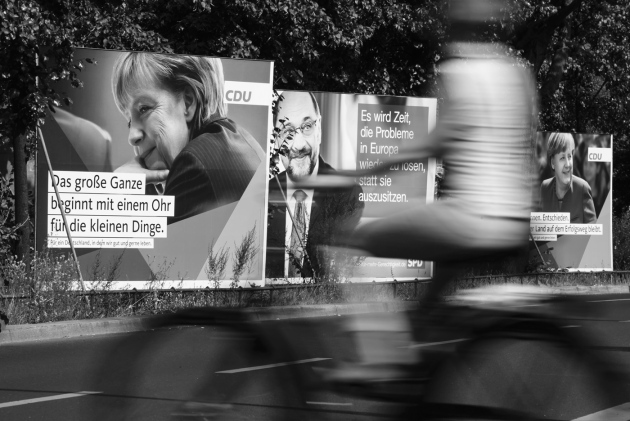 Germany under Angela Merkel has made steady progress on science.

“We can do it!” was Angela Merkel’s famously laconic response in 2015 to the refugee crisis. The phrase serves just as well as a motto for her country’s pragmatic approach to science. Like most modern nations, Germany owes its affluence to a powerful composite of liberal democracy, education and curiosity-driven advances in knowledge and technology. But unlike some democracies — the United Kingdom and the United States among them — Germany has wisely chosen not to weaken its scientific base through neglect, isolation or arrogance on the part of the powers that be.

That is likely to continue. Merkel, a physicist by background, shows welcome immunity to the strengthening political mood of anti-science resentment and post-factual phantasm. Polls suggest she is likely to continue her 12-year chancellorship after the federal elections on 24 September. But whatever government coalition might result from the vote (in Germany’s political landscape, one single political party rarely gets enough votes to rule alone) scientists can trust that the next government will keep up the level of support that has made twenty-first century Germany a prime destination for research.

There is agreement across the political spectrum, for example, on the need for increased federal support for science and higher education, to lessen the burden on Germany’s Länder (states) and particularly to strengthen university education and research, which is mostly funded by the Länder. Indeed, as we discuss in one of a series of articles that highlight Germany, some €35 billion (US$42 billion) might be needed over the next decade to maintain and modernize university research infrastructure. The next government must signal early on that it is prepared to shoulder the task.

Nature asked each party for its views on a number of pressing issues relating to science. Notable political differences emerged. The Social Democrats — the junior partner in Merkel’s current grand coalition government — oppose the release of genetically modified organisms (GMOs) and favour strict regulations on genome editing using CRISPR technologies. Merkel’s Christian Democrats say they want considerably more-liberal regulations in these areas. Both of these two main parties are determined, however, that the use of human embryos for research purposes will remain banned in Germany.

Possible junior partners in a new coalition are the Greens and the liberal Free Democrats (FDP). Both are likely to easily gain the 5% share of votes necessary to win seats in parliament. The Greens, although also strictly opposed to deliberate GMO releases, are considerably less restrictive in their approach to ‘risky’ technologies and animal experiments than they were in their early days. The FDP favours decidedly liberal policies in all fields of science and technology.

The socialist Left Party (Die Linke) and the far-right Alternative for Germany (AfD) are also expected to meet the 5% threshold, but are unlikely to be asked to join any coalition. Scientists won’t miss them. Die Linke is the only political force that says it wants to discontinue the successful Excellence Initiative for universities. The AfD didn’t even respond to Nature’s science-policy questions. And of the dozens of splinter parties also standing for election — mostly single-issue groups ranging from animal-protection hardliners to downright esoteric groups — none is likely to clear the 5% threshold.

Of the research money spent in Germany — a relatively high 3% or so of gross domestic product — private industry accounts for about two-thirds. This is also comparatively high, and one priority of the next government must be to enable Germany’s research-intensive companies, including a car industry stricken by scandals over diesel-engine emissions, to compete in the global technology market and maintain its value-adding research and development activities.

Despite record student numbers, many of these companies struggle to find talented researchers and engineers among German graduates. Keeping the country open to talent from around the world — by offering generous stipends, easing visa requirements for scientists and rewarding talented migrants — is crucial if Germany is to maintain its success in science.

The recipe for that success — trust in science, openness to necessary change and a habit of methodically doing the right thing — is a lesson for those charged with overseeing more tumultuous science and policy environments elsewhere. Science is a thoroughly international affair. And amid political tensions and the surge of international terrorism, science and science diplomacy assume a peace-keeping dimension that is not often appreciated. Germany has long been a reliable partner of academically and politically troubled countries including Russia, Turkey and Egypt. Angela Merkel — or her successor — should keep this in mind when forging her country’s future. Merkel deserves the chance to continue her good work. Can she do it? Yes she can.