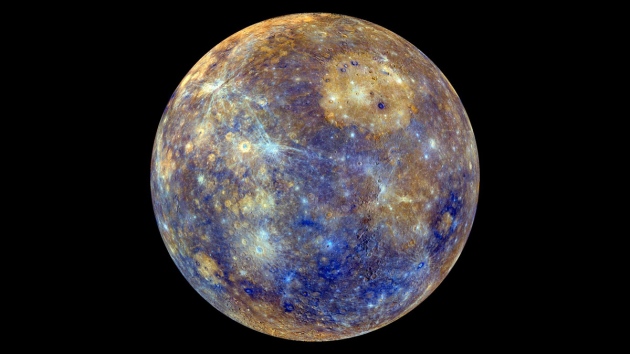 The planet closest to the Sun has shrivelled much more over its lifetime than previously thought, scientists have found.

Studies of Mercury show that it has shrunk by about 11 kilometres across since the Solar System's fiery birth 4.5 billion years ago. As the planet cooled and contracted, it became scarred with long curved ridges similar to the wrinkles on a rotting apple.

A new census of these ridges, called lobate scarps, has found more of them, with steeper faces, than ever before. The discovery suggests that Mercury shrank by far more than the previous estimate of 2-3 kilometres, says Paul Byrne, a planetary scientist at the Carnegie Institution for Science in Washington DC. He presented the results today at a meeting of the American Geophysical Union in San Francisco, California.

The finding helps explain how Mercury's huge metallic core cooled off over time. It may also finally reconcile theoretical scientists, who had predicted a lot of shrinkage, with observers who had not found evidence of that — until now. “We are resolving a four-decades-old conflict here,” Byrne told the meeting.

Planetary scientists have been arguing over Mercury's lobate scarps ever since the Mariner 10 spacecraft flew past the planet three times in 1974-75. Researchers can use measurements of the length and height of the scarps to calculate how much planetary shrinkage they represent.

That shrinkage is a product of Mercury's odd composition — “like a core floating through space with a thin outer blanket,” says Byrne. Most of the planet is made of that large core, and so it would have cooled rapidly as heat rushed toward its surface. Modelling studies have long suggested that the planet should have shrunk by 10-20 kilometres over its lifetime, compared to the 2-3 kilometres estimated from Mariner 10 data1.

The latest estimates come from NASA’s MESSENGER probe, which photographs and measures Mercury's topography. Last year, Italian scientists used MESSENGER data covering one-fifth of the planet to show that its shrinkage was probably greater than the Mariner 10 estimates2.

Those numbers are plausible to at least one planetary scientist who studied Mercury’s shrinkage using Mariner 10 data in the 1970s. Jay Melosh, a planetary geologist at Purdue University in West Lafayette, Indiana, suspects that even more lobate scarps may be lurking out there. “Many of these things may still be hiding,” he says. “As far as I'm concerned, this may be an underestimate of the amount of shrinkage.”