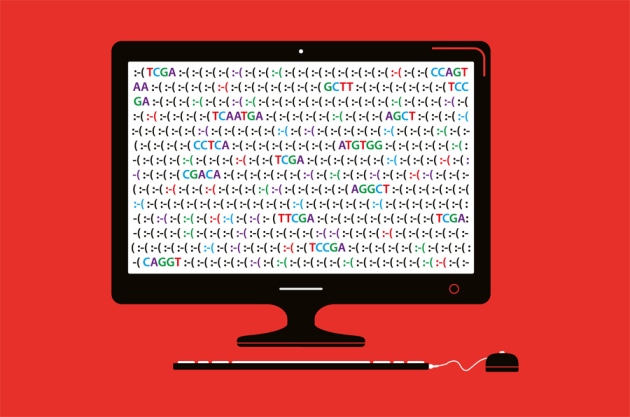 Five decades of work on antidepressant drugs have not made them more likely to lift people out of depression. Medications and psychotherapies help some people with the disease, but fail many others. In a study1 conducted in real clinical settings, a common antidepressant produced a response in just under half of the participants, and achieved full remission in only 28%.

Failures to improve efficacy reflect continued ignorance of the molecular mechanisms of depression. Progress in other disorders, such as autism and schizophrenia, suggest that the best hope for insights is to identify specific genetic variants associated with the disease. However, success in depression will require studies of much larger collections of human DNA samples than in other diseases if statistically significant signals are to come through. The investments will be well worth it.

Today's antidepressants all descend from serendipitous observations in human trials of two molecules more than 50 years ago: imipramine, synthesized as a potential antipsychotic drug, and iproniazid, designed to treat tuberculosis. Neither worked for its intended purpose, but both relieved the symptoms of depression. More than 20 antidepressants followed, all working in roughly the same way as these two — boosting signalling by neurotransmitters, mostly noradrenaline and serotonin. Although newer drugs are less toxic, none has greater efficacy than the first drugs of the 1950s2.

What went wrong? Researchers attempting to make new antidepressants developed rodent behavioural assays based on the effects of imipramine and iproniazid on healthy laboratory animals. Unsurprisingly, these assays selected new compounds that act similarly to the drugs on which they were based2.

To find more-effective drugs that help more people, we must look for drugs that work in different ways. In the past decade, some investigators have returned to observing drug effects in depressed people and found, for instance, that a dose of intravenous ketamine (which blocks one of the receptors for the neurotransmitter glutamate) relieves symptoms of depression rapidly and for up to a week. Although potentially leading to new treatments, observations of this sort are unlikely to yield deep molecular insights into the mechanisms of depression.

Any drug that perturbs several circuits and cell types in a complex system such as the brain yields an enormous number of divergent effects. Which of these myriad effects matters? Without independent clues of what happens in the brain to produce depression, researchers cannot seek out those drug effects that might counteract the pathology. After 50 years, we still do not know very much about how imipramine (sometimes) reverses the symptoms of depression.

Depression is difficult to study: it is hard to find features of the brain to focus on. The plaques and tangles observed in the brains of people with Alzheimer's disease provided important early clues to amyloid-β and tau protein. In contrast to many other brain disorders, depression lacks distinctive pathology, not even the thinning of the brain's cortex seen in schizophrenia.

For now, animal models are more likely to be a source of distraction than insight. The cellular and molecular mechanisms — and thus possible drug targets — by which humans exert cognitive control over thought, emotion and behaviour differ markedly from those in mice and rats. Rodents lack the brain region crucial for human cognitive control, the dorsolateral prefrontal cortex. 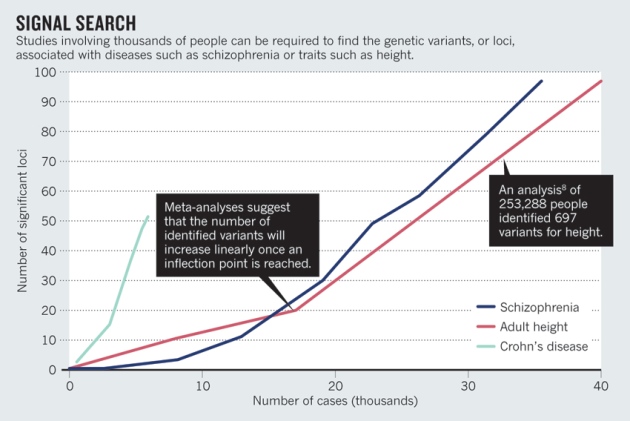 Deciphering signals in humans will be tough. People with major depressive disorder (MDD), according to the fifth edition of the Diagnostic and Statistical Manual of Mental Disorders (DSM-5), span diverse ages of onset, mixtures of symptoms and impairments, and show varied treatment responsiveness. A person can be diagnosed with major depression by meeting any five of nine criteria. Thus, some participants enrolled in a study might overlap on only a single, varying criterion. Moreover, in the DSM-5, the threshold for being considered ill was determined arbitrarily. Unlike hypertension or blood pressure, there are no empirical studies of outcome that set the bar for a medical diagnosis.

Amid these traps, one clue to molecular mechanisms of depression has long beckoned: genetic analysis. Spurred by recent technological developments, genetic analysis has begun to yield powerful clues in autism, schizophrenia and bipolar disorder3, 4.

But unravelling the genetics of depression also faces significant obstacles. The heritability — the fraction of phenotypic variance explained by genes — is 35% for MDD, compared with 65–80% for the psychiatric diseases for which genetic analysis is proving very successful3, 4. Several lines of evidence argue that risk of depression is highly polygenic, involving many hundreds of genes. This, combined with diagnostic 'noise' — that is, the heterogeneity and misdiagnosis of people with MDD — drives up the number of subjects needed to find significant genetic associations. Combined with our ignorance of disease mechanisms for depression, the tiny signal-to-noise ratio has doomed past searches for candidate genes and gene–environment interactions5.

The largest meta-analysis of genome-wide association studies of depression (approximately 9,500 cases) has yielded no significant findings6. Similarly sized studies of almost all other conditions have convincingly implicated7 at least some genetic loci (see 'Signal search'). So far, 108 independent loci have been found to demonstrate genome-wide significance for schizophrenia4.

“The tiny signal-to-noise ratio has doomed past searches for candidate genes.”

Nonetheless, I am convinced that genetic variants for depression can be found. Type 2 diabetes also has a heritability of 35% or lower. Perhaps because this type of diabetes can be diagnosed simply and objectively, studies with fewer than 10,000 cases have identified many common genetic variants. More than 100,000 people with MDD will be needed to find enough loci to inform biology and therapeutics. Amassing a data set of this scale is difficult, but worthwhile and possible. A meta-analysis8 of genome-wide association studies published earlier this year for adult height included more than 250,000 subjects and has found 697 common variants thus far, explaining nearly one-fifth of the heritability.

Diagnosing MDD is more challenging than measuring height, of course, but the extra effort and cost are justified to illuminate the world's greatest source of disability. We will need a global coalition to assemble the requisite number of samples. An assessment of common genetic variants for psychiatric disorders now costs less than US$100 per person; recruiting participants and the logistics of obtaining and shipping DNA samples have costs, but samples can be made available from many existing studies of depression and from registries in Scandinavia. Samples of other ethnicities are also being assembled.

It took about five years for the Psychiatric Genomics Consortium to collect and analyse nearly 40,000 schizophrenia cases. Similar efforts in depression are gearing up, and should proceed smoothly because the steps in the genetic analysis of psychiatric disorders are now well understood, a microarray (gene chip) fit for the task is available, and experienced scientists are prepared to perform the analysis.

Once genetic loci are identified and shared with the scientific community, many investigators, drawn by the emergence of biologically actionable clues, will rush to put the information to work. This is what has happened in the past decade in autism research. When I was director of the US National Institute of Mental Health, from 1996 to 2001, parent groups and the US Congress strongly encouraged me to increase investments in autism research. Seeing no clear scientific paths forward I was reticent, and requests for proposals generally yielded weak grant applications.

However, genetic insights9 transformed a featureless landscape into one with real scientific toeholds. This work has not yet yielded new treatments, but there is now a path. New genetic insights even led to clinical trials of treatments for Fragile X syndrome, which has both autism and intellectual disability as cardinal features. Although these trials were unsuccessful, drug companies have now begun to consider this condition as amenable to pharmacological treatment.

“I am convinced that genetic variants for depression can be found.”

Critics will counter that the genetic discoveries among certain autism spectrum disorders are rare mutations of large effect, and those to be expected in depression will be common variants with small effects on risk. The answer is that definitively identified risk alleles will point to genes involved in pathogenesis and these genes will, in turn, identify biological pathways that provide potential targets for therapeutics. Risk alleles also show whether candidate drugs should increase, decrease or otherwise alter the activity of the implicated pathway. In 2012, a variant in the gene that produces β-amyloid precursor protein was identified as protecting against Alzheimer's disease, providing powerful evidence that drugs targeting amyloid peptides might work.

Genetic loci for depression will be especially useful when considered in the context of variants that contribute to other neuropsychiatric disorders. Just as inflammatory diseases and autoimmune diseases have both shared and unshared risk alleles, major depression will have risk variants that overlap with bipolar disorder, schizophrenia and several other psychiatric disorders. Comparing the effects of genes shared across diseases and those associated with just a single disease will hopefully be informative10.

To assess the biological significance of the genetics, reprogramming human skin fibroblast cells into neurons and gene-editing technologies will be hugely useful. Human skin cells can now be coaxed into forming increasingly specific types of neuron, and risk variants can be engineered into or removed from cells. As a result, researchers can interrogate hundreds of variants for their effects on human cells and, for the first time, screen drugs for psychiatric disorders in vitro. It will be difficult to relate cellular phenotypes to the symptoms of depressed individuals, but new technologies to examine circuits in vitro, in animals and in people could help.

Although the individual effects of specific risk alleles will probably be very low, the information they could yield is enormous. They will allow researchers to rely on understanding, and not just luck, to make inroads into one of the biggest causes of human misery.