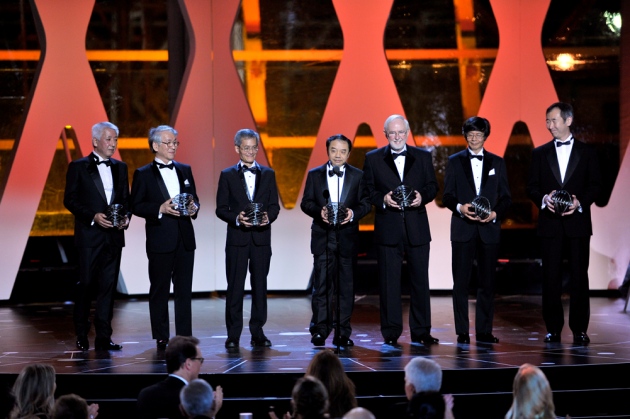 It is a celebration of the collective over the individual. Whereas only two physicists picked up this year’s physics Nobel prize for the discovery that neutrinos have mass and can change identity while travelling, 1,377 collaborators who were involved in the ‘neutrino oscillation’ experiments behind the finding will share the US$3-million Breakthrough Prize in Fundamental Physics.

The Age of the Neutrino: A graphical guide

The awards, announced on 8 November at a star-studded ceremony at NASA’s Ames Research Center in Mountain View, California, also honour five biologists in the life sciences and a mathematician.

“There is a message here that science is a much more collective effort than it was 100 years ago,” says Russian Internet entrepreneur Yuri Milner, who is one of the prizes’ founders. “It is international, it is diverse, it involves lots of people.”

The Breakthrough physics prize marks the first time that a significant science prize has been awarded to such a large group of people — which Milner describes as “a logistical nightmare”. It recognizes the members of five international experiments that established that neutrinos have mass, contradicting the standard model of particle physics. In October, the Nobel prize was shared between just two people for the same discovery: Arthur McDonald at Queen’s University in Kingston, Canada, and Takaaki Kajita at the University of Tokyo. (Both are among the Breakthrough prizewinners.)

“This is recognition for excellent science that could only be achieved by cooperation between many scientists,” says McDonald, who led an experiment at the Sudbury Neutrino Observatory in Canada.

Each of the five teams will receive $600,000; team leaders are allotted two-thirds of the money, with the remaining one-third split among other team members.

Because it follows hot on the heels of the Nobels, the Breakthrough prize could be seen as a direct criticism of its older rival, which notoriously refuses to honour more than three individuals, in science categories. But Edward Witten, a physicist at the Institute for Advanced Study in Princeton, New Jersey, who chaired the Breakthrough selection committee, notes that the winners were chosen over the summer, before the Nobels were revealed, so the overlap is coincidental. Nonetheless, Witten says, the decision makes a deliberate statement: “We … consider it important to include at least at a symbolic level the many scientists who contributed.”

Göran Hansson, secretary general of the Royal Swedish Academy of Sciences, the body that awards the Nobel prizes in physics and chemistry, stands by the Nobels’ policy, however. “Precisely because there is so much emphasis on huge organizations, we feel it is important to identify the individuals who pioneered the discoveries,” he says. The Breakthrough prizes are no threat to the prestige of the Nobel, Hansson adds: “We have more than a century of legacy, and people will continue to look to the Nobels to identify excellence in science.”

Five biologists were also awarded Breakthrough prizes: neuroscientists Karl Deisseroth at Stanford University in California and Ed Boyden at the MIT Media Lab in Cambridge, Massachusetts, received separate awards for developing optogenetics — the programming of neurons so that their electrical activity can be controlled by light. Helen Hobbs at the University of Southern Texas Medical Center in Dallas was recognized for her discovery of human genetic variants that alter cholesterol levels. John Hardy at University College London was honoured for finding the mutations in the gene encoding amyloid precursor protein that cause early-onset Alzheimer’s disease, and Svante Pääbo at the Max Planck Institute for Evolutionary Anthropology in Leipzig, Germany, was recognized for sequencing ancient genomes.

Mathematician Ian Agol at the University of California, Berkeley, received an award for proving three conjectures relating to how three-dimensional ‘manifolds’ (higher-dimensional equivalents of two-dimensional surfaces) can be flattened and transformed. The work could one day have applications for understanding how space-time curves, says Agol, who has previously received the Clay prize and other established maths prizes.

Compared to those awards, says Agol, the Breakthrough Prize is too new to have established a clear status, and doesn't yet have the same level of fame among mathematicians. “In any case, it is a great honour to be receiving this,” he adds — although admits he doesn't relish appearing on television.

The award ceremony, hosted by Family Guy creator Seth MacFarlane, was broadcast live for the first time on the National Geographic Channel, and an edited version will be aired on FOX. It also honoured eight early-career scientists, who received $100,000 each, and the winner of a prize for schoolchildren.

This story's first version and headline incorrectly stated that 1,370 physicists had won the Breakthrough prize; the correct number is 1,377.

An earlier version of this story gave Göran Hansson’s former role in the Nobel system. That description has now been replaced with his current position.