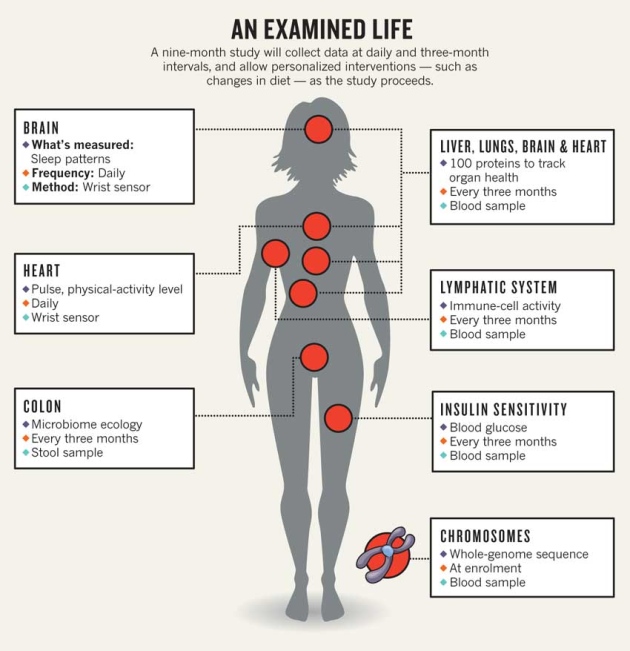 Leroy Hood, president of the Institute for Systems Biology (ISB) in Seattle, Washington, likes to talk about what he calls P4 medicine: health care that is predictive, preventive, personalized and participatory. Medicine today is a string of infrequent interventions prompted mainly by symptoms of illness. Hood argues instead for continuous management of health, making full use of whole-genome sequencing and biomarkers to correct disease before it gains a foothold.

In March, Hood will embark on the first big test of his ideas: a nine-month pilot study, dubbed the Hundred Person Wellness Project, in which 100 healthy individuals will be intensively monitored (see ‘An examined life’), offered regular feedback and counselled on lifestyle changes such as shifts in their dietary or sleep habits. The effects of these behavioural changes on their health will, in turn, be tracked using a battery of diagnostic tests.

The study violates many rules of trial design: it dispenses with blinding and randomization, and will not even have a control group. But Hood is confident in its power to disrupt the conventional practice of medicine. “We hope to develop a whole series of stories about how actionable opportunities have changed the wellness of individuals, or have made them aware of how they can avoid disease,” he says.

If the pilot study works as hoped, it will expand in several phases until it encompasses 100,000 subjects monitored over 25 years. The ISB is paying for the first hundred people through private donations and has budgeted around US$10,000 per person. Hood expects those costs to drop drastically in a larger study, thanks to economies of scale and rapidly evolving diagnostic technologies. But he acknowledges the challenge of securing the hundreds of millions of dollars that a generation-long trial would require.

Even in its pilot phase, the project is unusually thorough. The ISB will sequence the whole genome of each participant at the outset. And in later phases, Hood says, the study team will also examine epigenetics: methylation and other modifications to DNA that can reflect environmental exposures. But that is just the tip of the data-collection iceberg. 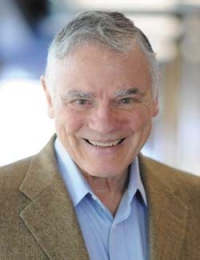 Leroy Hood: “We hope to develop a whole series of stories about how actionable opportunities have changed the wellness of individuals.”

Participants will be asked to wear digital devices that will continuously record their physical activity, heart rate and sleep patterns; subjects will periodically upload those data to the institute’s systems. Every three months, researchers will gather samples of participants’ blood, urine, saliva and stool. They will measure five biochemicals in saliva and urine, and sequence the stool samples to track the ecology of major microbial species in the gut. Blood-chemistry screens will extend well beyond the usual tests for cholesterol and glucose to include 20 less-commonly monitored variables, such as C-reactive protein — which signals inflammation at high levels. Hood’s teams will also monitor about 100 organ-specific proteins that, he says, are sensitive markers for transitions from health to disease in mouse and cell models.

The point of the study — and of P4 medicine in general — is to detect those transitions and respond to them before symptoms appear. To that end, participants (mostly residents of the Seattle area, invited through social media) will have full access to their personal ‘cloud’ of data points. Some will have enough scientific training to dive into the literature and interpret their data themselves. But Hood expects most to rely on ISB-provided wellness coaches and their own physicians to interpret the results and recommend medical treatment or changes in diet or behaviour.

“The most amazing thing here is the repeated assessment every three months for some of these markers,” says Graham Colditz, head of the public-health sciences division at Washington University School of Medicine in St Louis, Missouri. Colditz is a former principal investigator of the Nurses’ Health Study, which has followed some 120,000 US nurses for 37 years through biennial questionnaires, plus a one-time collection of toenail clippings and two sets of blood samples from a subgroup.

But giving all of the ISB study participants feedback, and pushing them to make changes while the study is under way, risks thwarting the researchers’ ability to draw conclusions about what worked and what did not, some researchers say. And Colditz thinks that without control subjects who do not receive personalized coaching, and with so many complex data streams to analyse, Hood’s team might have a hard time separating real signals from noise in the data.

Hood acknowledges the possible problems. But he counters that the existing clinical-trial system is “totally failing” because it cannot control for peoples’ different genetics and environments. The Hundred Person Wellness Project, he adds, recognizes that those differences are paramount, and treats each person as his or her own experiment. “We can follow things very carefully with each person and see how they respond,” he says.

Yet some study participants might have an experience similar to that of Larry Smarr, a computer scientist at the University of California, San Diego, and an early pioneer of the ‘quantified self’ movement. For 14 years, he has regularly monitored his biometrics — taking blood, DNA and, most recently, stool samples. He responded to the results by exercising more and radically overhauling his diet. His highly examined life delivered some impressive benefits — he lost 11 kilograms.

But Smarr says that it has also led him to discover alarming spikes in his immune activity, and a strange microbial ecology in his gut. “I had about 10% E. coli; the average healthy person has 0.06%,” he says. Physicians told him he had late-onset Crohn’s disease — something that he suspects might have been inflicted by his dietary changes.

Smarr says he would love to participate in the ISB study in the hope of getting his digestive system back on track; Hood says that there are a few spots left and that he is welcome. “I’m 65, so it’s questionable whether I’ll be around for another 25 years” to see the end of the long-term study, says Smarr. “On the other hand, watching me go bad could be a good thing to have in the database.”