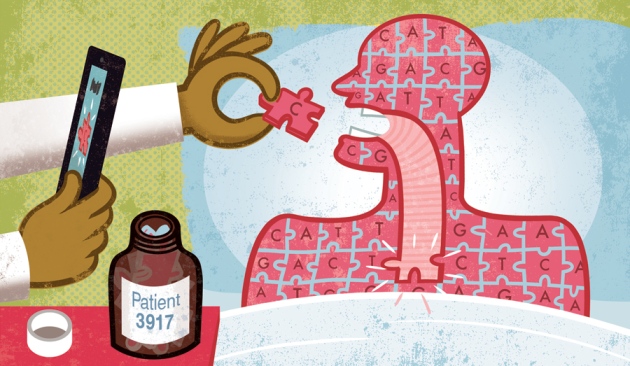 More and more people are getting their DNA sequenced. But the use of genetic data to inform medical decisions is lagging. More than a decade since the Human Genome Project was declared complete, fewer than 60 genetic variants are deemed worthy for use in clinical care, most for severe conditions in very young children1.

These genetic variants can guide medical decisions (see ‘Genes that doctors use’). By some estimates, women with certain variants in the BRCA genes have about an 80% chance of developing breast cancer, leading some who carry the mutation to opt for preventive mastectomies. Screening for faulty genes involved in iron transport can alert affected individuals to a need to alter their diets to avoid developing haemochromatosis, a toxic build-up of iron that damages the liver, heart and other organs. Mutations in the EGFR gene can indicate whether lung cancer will respond to expensive drugs with fewer side effects than standard chemotherapy. But five years after EGFR tests were commercialized, only around 6% of appropriate US patients were being genotyped, partly because their physicians were unaware of the tests2.

Clinical trials have been used to assess whether genomic information yields practical benefits. A study3 of nearly 2,000 patients with HIV showed that genetic screening for a variant called HLA-B*5701 could help to prevent toxic reactions to the AIDS drug abacavir — a fact that is now written into US treatment guidelines. And last year, two separate randomized trials4, 5 evaluated whether genotyping should guide the use of warfarin, prescribed to prevent blood clots. The studies reached different conclusions, perhaps demonstrating that such trials are not always the best way to assess the use of a genetic test.

Genes that doctors use

What is more, such trials can take years and millions of dollars to complete. They are usually paid for by pharmaceutical companies in the hope of selling a specific product. But only a fraction of genetic variants are tied to commercial opportunities.

Meanwhile, numbers of intriguing genetic variants are surging. Analysis of tumour genomes has revealed some 140 genes whose mutations contribute to cancer6. Saudi Arabia, the United Kingdom and the United States have all launched projects that in total will sequence about 100,000 individuals. The clinical-sequencing market has been estimated at more than US$2 billion.

For these investments to pay off, there needs to be an efficient way to evaluate whether genetic information leads to better health care. One solution is to gather evidence during routine clinical care. In other words, health systems should embrace research. This will require hefty investment in new workflows, informatics and data-analysis techniques.

With the right infrastructure, the number of clinically useful variants could grow into the thousands, making genomics crucial to medical care7. In the United States — my focus in this article — a large, fragmented health sector fosters many independent arms that can struggle to work together, in contrast to a national health-care delivery system such as the National Health Service in the United Kingdom. But the need for health-care systems that learn is similar the world over.

Some health-care organizations are working out ways to collect evidence from ongoing care to improve patient outcomes. Such efforts systematically analyse clinical data from peer-reviewed literature and introduce selected findings into clinical care. Then they track and evaluate outcomes.

One of the best examples of such a 'learning health-care system' is the Geisinger Health System, which serves 2.6 million patients in Pennsylvania. Once diagnosed with chronic conditions such as diabetes, heart failure or depression, patients' care and outcomes are monitored. Metrics such as hospitalization rates are used to recommend that certain individuals receive coordinated attention from a team of specialists including mental-health practitioners and nutritionists. Over three years, this reduced hospital admissions by 18% and seemed to reduce spending by 7% (ref. 8).

A learning health-care system depends on electronic medical records (EMRs) — comprehensive, accessible stores of patient data. EMRs can, for instance, allow a health system to identify people with diabetes who have also been prescribed blood-pressure medication, and determine rates of heart or liver failure according to age or gender. 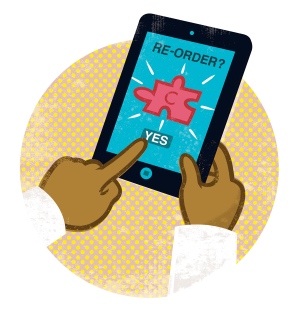 Dozens of health-care systems are adapting to conduct genomics research9. Several hospitals, including Children's Mercy Hospital in Kansas City, Missouri; Baylor College of Medicine in Houston, Texas; and the Medical College of Wisconsin in Milwaukee, are using sequencing to unravel maladies that defy diagnosis, including life-threatening intestinal inflammation in a young child and the probable cause of seizures in another.

The UK Genomics Initiative is sequencing 100,000 people's genomes and linking the resulting data to the participants' National Health Service records. In the United States, the care consortium Kaiser Permanente and the University of California, San Francisco, are testing whether a set of genetic variants assessed in 100,000 patients might identify those with higher health risks. Vanderbilt University in Nashville, Tennessee, found10 that 91% of all patients and 96% of African American patients carried one or more variants implicated in affecting response for five common prescription drugs, including warfarin and simvastatin, a cholesterol-lowering agent.

Such 'pharmacogenomic' applications — in which genetic markers are used to fit drugs to patients — are among the most promising areas for collecting evidence during clinical care. In Thailand, about 12% of people have genetic predisposition to Stevens–Johnson syndrome, in which certain medications trigger a blistering, life-threatening rash. The government has sponsored a programme in which any Thai citizen can be genotyped to predict reactions to problematic drugs such as carbamazepine, commonly used to control seizures. Ramathibodi Hospital in Bangkok provides a health card for patients with risky genetic variants to present to pharmacists, alerting them to provide alternative medications. Whether decreased toxicity merits the use of less-effective drugs is being evaluated.

Other efforts are making genomic information part of routine care during a visit to the doctor or a hospital stay. The US National Human Genome Research Institute is now funding projects that explicitly explore clinical implementation of genomic information through EMRs. The Electronic Medical Records and Genomics (eMERGE) network, a consortium of nine institutions that use commercial and homegrown EMRs, is developing ways to capture genomic information, store it securely and incorporate it into computer algorithms to guide clinicians.

As more genetic data are incorporated into EMRs, health systems can carry out 'pragmatic clinical trials' — those that randomize groups of clinicians to study an intervention (in this case treatments guided by genetic information) compared with usual care. Although standards for how results should be assessed and adopted still need to be worked out, such studies are cheaper than conventional clinical trials and can collect data from people with multiple conditions, who are often excluded from trials.

To translate genetic analysis into improved medical care, hospital executives and other leaders must redesign how they collect and manage data so that it can be used in research. Existing patient databases for clinical care are often inadequate for evaluating health interventions: data are frequently missing or incorrect, and it can be hard to link data about, for example, demographics, appointments, procedures, medications and vital signs.

Pioneers of learning health-care systems have established streamlined consenting processes and data warehouses that link EMRs with genomic assays from patients' banked biospecimens. However, systems are not consistently incentivized to build these capacities. Health leaders want evidence before investing resources, yet without those investments, such evidence is hard to gather.

This makes the experiences from diverse health systems all the more precious. In January this year, a nascent organization of countries and international organizations met to discuss their efforts to evaluate how and whether genetic variants can improve clinical care. Programmes are a blend of data collection (bringing genomic information and medical records together), clinical implementation (getting providers to use information) and outcomes (assessing the impact of using information).

For example, the Singapore National Eye Center is using genetic testing to diagnose some eye diseases, select treatments and, when warranted, encourage family members to be screened. The Luxembourg Centre for Systems Biomedicine and the Centre Hospitalier de Luxembourg are diagnosing and stratifying risk for Parkinson's disease, and the University of Colombo in Sri Lanka is doing the same for inherited blood disorders. Vanderbilt University, the Geisinger Health System and Northwestern University in Evanston, Illinois, are incorporating pharmacogenetic testing to select medications. And Duke University in Durham, North Carolina, allows people to report their family histories of disease online. This flags the individuals most likely to benefit from genetic screens for variants that raise colon-cancer risk or lead to heart defects that can cause sudden death.

But how will the use of genetic variants in medical decisions move from exploratory to mainstream? The US Centers for Disease Prevention and Control has developed a useful framework to evaluate new genomics tests. It includes whether a test measures genotype accurately, how reliably it provides information about a diagnosis or outcome, how likely it is to improve outcomes and whether the test has ethical, legal or social implications, such as uncovering false paternity or future untreatable conditions.

The medical-genomics community now needs to focus on how to decide what levels of evidence are required to demonstrate that assessing a variant helps patients. For example, a variant that may require a change in diet might need less evidence than one that may require an irreversible surgical procedure. The clinical community should commit to developing ways to evaluate genetic variants as 'actionable', including understanding how results from one patient population might apply to another with differing genetic backgrounds or health practices.

Most health systems around the world are not fit to shepherd genome sciences into routine health care. Each health system still makes ad hoc decisions about how to use genetic information. Holding international meetings and establishing consortia are essential first steps. Hospitals must appreciate that informatics investments will benefit patients and efficiency. Such shifts will be difficult — clinicians may resist, resources will be tight and experiments will fail (see ‘To-do list’). Adoption will increase as success stories accumulate and practices change, but those who act early will enjoy some advantages. US systems that made initial investments in institutional biobanks were better placed to compete for federal funding, for example.

Next steps for key players in medical genomics

Meanwhile research and health-care funders should incentivize those embedding genetic information into clinical care. Providers, regulators, insurers and health ministries will have more confidence in gene-tailored treatments, and patients will hopefully have better care and improved health.