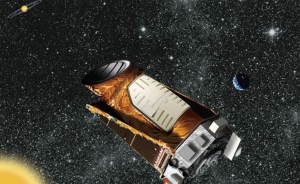 Kepler (shown in an artist's impression) has found 132 confirmed exoplanets, but its future is in doubt.

Just over four years after it was launched into orbit, NASA's Kepler space telescope has broken down. On 14 May, after tilting in an unexpected direction, Kepler entered a protective safe mode and stopped collecting data. Efforts to get the spacecraft going again failed when a wheel crucial for pointing the telescope refused to spin.

NASA is not ready to give up on the mission, which launched in 2009 and was last year extended to 2016. Running on thrusters, Kepler has enough fuel to stay in orbit for months or perhaps years as engineers try to fix the problem from 64 million kilometres away. But with two of its four reaction wheels now out of commission — the first stopped working last July — the spacecraft's search for planets around other stars is clearly in trouble.

"I wouldn't call Kepler down and out just yet," said John Grunsfeld, associate administrator of NASA's Science Mission Directorate in Washington DC, during a teleconference on Wednesday. Nonetheless, he said, "we do need three wheels to do the exoplanet science".

The agency is still trying to find out whether it can collect any useful data with Kepler if project engineers cannot restore one of the faulty reaction wheels to working order.

Kepler looks for stars that dim periodically as some of their light is blocked by a passing planet. So far, the telescope has found 132 confirmed planets outside the Solar System, with 2,740 candidates still awaiting verification. Thanks to Kepler, astronomers now know that planets are common. Dozens of candidates thought to be about the size of Earth have turned up, as well as many bigger planets orbiting in the 'habitable zone' around their stars, where water could exist as a liquid.

But the telescope has not yet found a planet as small as Earth in the habitable zone around a Sun-like star, so its main goal — calculating exactly what fraction of stars in the Galaxy host such planets — remains unfulfilled.

Such a planet could still turn up in the coming years as scientists continue to sift through Kepler's data, many of which are yet to be analysed.

"I'm very optimistic that the data we have will allow us to accomplish that," says William Borucki, a space scientist at NASA's Ames Research Center in Moffett Field, California, and the principal investigator for the Kepler mission. "I think the most interesting, exciting discoveries are coming in the next two years."