“It feels like the entire universe is within a sphere that is maybe within a couple metres’ radius,” says topologist Henry Segerman at Oklahoma State University in Stillwater. He is describing, not an LSD trip, but his experience of exploring a curved universe in which the ordinary rules of geometry do not apply.

Segerman and his collaborators have released software allowing anyone with a virtual-reality (VR) headset to wander through this warped world, which they previewed last month in two papers on the arXiv.org preprint server1, 2.

To explore the mathematical possibilities of alternative geometries, mathematicians imagine such ‘non-Euclidean’ spaces, where parallel lines can intersect or veer apart. Now, with the help of relatively affordable VR devices, researchers are making curved spaces — a counter-intuitive concept with implications for Einstein’s theory underlying gravity and also for seismology — more accessible. They may even uncover new mathematics in the process.

“You can think about it, but you don’t get a very visceral sense of this until you actually experience it,” says Elisabetta Matsumoto, a physicist at the Georgia Institute of Technology in Atlanta.

Traditional, Euclidean geometry rests on the assumption that parallel lines stay at the same distance from each other forever, neither touching nor drifting apart. In non-Euclidean geometries, this ‘parallels postulate’ is dropped. Two main possibilities then arise: one is spherical geometry, in which parallel lines can eventually touch, in the way that Earth’s meridians cross at the poles; the other is hyperbolic geometry, in which they diverge.

Both Matsumoto and Segerman are part of Hyperbolic VR, a collaboration that is bringing hyperbolic spaces to the masses. Their team, which includes a collective of mathematician-artists in San Francisco, California, called eleVR, will unveil their efforts at an arts and maths conference this summer.

In the 1980s, mathematician Bill Thurston revolutionized the study of 3D geometries, in part by imagining himself wandering around them. Mathematicians have since developed animations and even flight simulators that show an inside view of non-Euclidean spaces.

Playing ball in the 3D torus

But compared with those visualizations, which were displayed on a computer screen, VR has the advantage that it reproduces the way in which light rays hit each eye. In Euclidean space, staring at a point at infinity means that the lines of sight of the two eyes track parallel lines. But in a hyperbolic world, those two paths would veer apart, says Segerman, forcing a different response from the viewer. “Here, if you look at a point at infinity, you have to cross your eyes slightly.” To our “Euclidean brain”, that makes everything feel kind of close, he says.

But the smallness is deceptive. One of the oddest facts about hyperbolic space is its sheer vastness. Whereas in Euclidean space the surface area within a given radius grows as fast as the square of the radius, and the volume grows as fast as its cube, in hyperbolic space areas and volumes grow much (exponentially) faster relative to the radius. One consequence is that a user roaming a planet in the hyperbolic world finds much more to visit within walking distance.

So far, there is not much to do in the eleVR world, apart from exploring tilings made of geometric shapes such as pentagons and dodecahedra. But the team plans to build hyperbolic houses and streets, as well as interactive experiences such as playing a non-Euclidean version of basketball. The researchers hope that their open-source software will become popular with science museums and the growing legion of consumer VR enthusiasts. 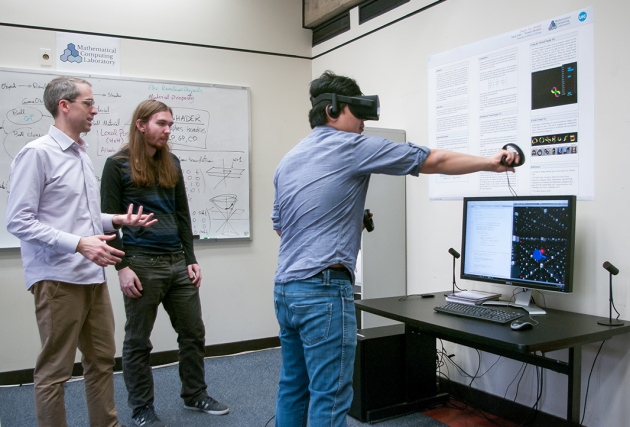 Others are bringing hyperbolic space to VR, too. Daan Michiels, a mathematician at the University of Illinois at Urbana–Champaign, developed a virtual hyperbolic universe as a student project in 2014. And David Dumas, a topologist at the University of Illinois in Chicago, and his students created a racquetball game in a virtual hyperbolic space, in which a ball sent in any direction eventually comes back to the starting point.

Virtual reality could soon join a long tradition of visualization and experimental tools that have helped mathematicians make discoveries. Visualizing fractals, for instance, led to discoveries about the underlying mathematics. “Figuring how to make use of [virtual reality] as a research tool is just starting now,” says Dumas.

Matsumoto says that the team would also like to create VR experiences for even more exotic geometries. In some such spaces, parallel lines might stay at a constant distance from each other if they go in one direction, but converge or diverge in another direction. And walking around a circle might lead to a place that’s up or down relative to the starting point, like going up or down a spiral staircase.

Visualizing such geometries could be especially useful as a mathematical tool, she says, because “very few people have thought of visualizing them at all”.