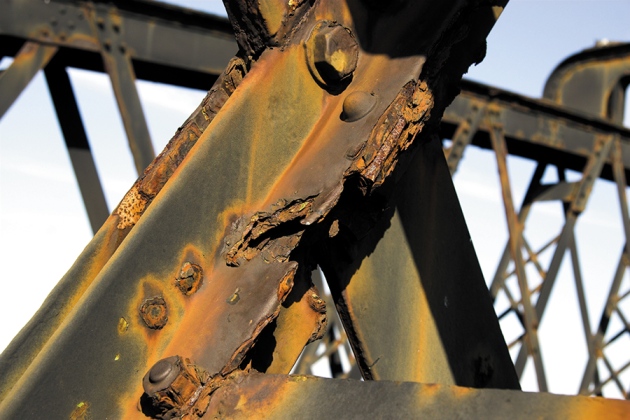 Corrosion costs around US$4 trillion a year globally.

In November 2013, an oil pipeline in the Chinese city of Qingdao exploded, killing 62 people and wounding 136. Eight months later, a similar explosion in Kaohsiung caused 32 deaths and 321 injuries. The pipelines were made of steel of the same specification and they failed after two decades of use in similar environments. The cause was corrosion — the degradation of a material by a chemical or electrochemical reaction with its environment.

Such disasters are common: each square kilometre of any Chinese city hosts more than 30 kilometres of buried pipes, creating tangled networks of oil and gas lines, water mains and electrical and telecommunications cables. Corrosion is costly, too. According to a US survey, corrosion costs six cents for every dollar of gross domestic product in the United States1. Globally, that amounts to more than US$4 trillion a year — equivalent to damages from 40 Hurricane Katrinas. Half of that cost is in corrosion prevention and control, the other half in damages and lost productivity.

A lack of knowledge hinders our ability to prevent failures. Degradation of underground pipes, for example, is influenced by the compositions, microstructures and designs of materials, as well as by a raft of environmental conditions such as soil oxygen level, humidity, salinity, pH, temperature and biological organisms.

Many industries, including oil, gas, marine and nuclear, collect corrosion data to identify risks, predict the service lives of components and control corrosion. Most of these data are proprietary, and best practices are rarely shared. Oil spills, bridge collapses and other disasters continue to occur.

Demand for knowledge about corrosion is growing, with the increasing use of advanced materials in medical devices, biosensors, fuel cells, batteries, solar panels and microelectronics. Corrosion is the main restriction on many nanotechnology applications.

Efforts to make materials data accessible, such as the Materials Genome Initiative (MGI), focus on 'births' rather than 'deaths' of materials. Online platforms for sharing corrosion data are badly needed. Access to a large volume and variety of corrosion information that researchers could probe with data mining and modelling tools would improve forecasts of corrosion failures and anticorrosion designs.

The biggest challenge in corrosion research is predicting accurately how materials will degrade in a given environment2. It requires full knowledge of all relevant factors and their interactions. Yet precise models for mechanisms are lacking. Forecasting problems is impossible without historical data about materials failures under various conditions. And field performances cannot be judged in laboratories when environmental parameters are unknown.

“Forecasting problems is impossible without historical data about material failures.”

Corrosion data are hard to collect. Damage may take years or decades to accumulate and any project tracks only a handful of contributing factors. Data sets need to be combined. For example, early studies of marine corrosion (occuring, for instance, on oil-drilling platforms) were unreliable because they considered only physiochemical processes (those involving pH, dissolved oxygen and temperature) and not the effects of organisms living in seawater. The inclusion of genomic data has now improved the models.

Corrosion depends on local conditions. Steel structures that last for decades in dry parts of inland China fail within months in humid and salty coastal areas of southeast Asia. Protective polymer coatings that work for years at northern latitudes can degrade in weeks near the Equator, where heat and greater doses of ultraviolet radiation break chemical bonds more quickly. Inferring general corrosion knowledge — such as how particular steels are affected by humidity, salt or air pollution — requires combining studies from many diverse environments. One worldwide survey of weathering steel, for example, reviewed exposure test results for up to 22 years from 108 sites in 22 countries3.

With global trade increasing, the oil and gas, construction, car, electronics and other industries have called for corrosion data to be shared between countries to ensure the quality and safety of their products. Millions of cars worldwide have been recalled in the past few years owing to unforeseen corrosion problems arising in destination countries. China's 2013 'Belt and Road' initiative, which promotes industrial ties with countries along the Silk Road economic belt between China and the West, raises unprecedented challenges. Rapid corrosion assessment, materials selection and design will be needed as billion-dollar construction, transport, energy and telecommunications projects begin in Asia, Africa and Europe.

Advanced materials present entirely new corrosion problems. For example, the electrochemical stabilities of noble metals such as platinum and gold fall sharply as their dimensions decrease to nanometre scales. Corrosion of platinum nanoparticles remains a roadblock limiting the lifetime of platinum-based catalysts for fuel cells.

Corrosion scientists have been slower than their materials-science peers to recognize the need for data sharing. Several large materials-data repositories built by US governmental agencies under the auspices of the MGI house basic physical, chemical and microstructure data for materials, but not corrosion data. Yet none of the advanced materials promised by the MGI will be practical without considering their environmental stability and durability.

Open data infrastructures should be set up to house corrosion data in various countries, industries and applications. By using the same standardized formats for data and metadata, the data can be connected and eventually amount to a global system, possibly linked to the MGI.

Governments should take the lead. For example, the Chinese government has invested nearly 200 million yuan (US$30 million) since 2006 on a platform for sharing corrosion data from 30 field-testing stations covering standard materials in environments (air, soil and water) typical of different parts of the country. Other nations, industries and interest groups should establish similar data infrastructures for corrosion in other regions and sectors.

Efforts need to be coordinated to collect corrosion data that are relevant to urgent or emerging challenges, such as alternative energy and nanotechnology. For instance, the US Department of Energy has partnered with the MGI to build materials data repositories to help to speed up the development of alternative clean-energy sources.

Funding agencies should incentivize the sharing of corrosion data about advanced materials and emerging technologies, for example, by demanding it in research grants and supporting the costs of publishing in open-access journals. Corrosion-science societies should learn from general materials-science societies (such as Materials Research Society, the Minerals, Metals & Materials Society and ASM International) and convene experts to establish data-sharing best practices and guidelines.

Industry involvement can be encouraged through partnerships with academia. Companies would save research and development costs in return for contributing data to repositories. Because corrosion concerns maintenance and safety rather than industrial competition, businesses should be willing to share such data. Data consortia can be formed to identify common topics of priority and jointly develop benchmark solutions, just as industrial standards are agreed.

More-powerful tools need to be developed for data capturing, management, mining, modelling and simulation — the integration of which we term corrosion big data and informatics4. Advanced monitoring technologies require 'big data' analytics. For instance, robots (known as 'smart pigs') carrying hundreds of sensors deployed to inspect the walls of pipelines can collect 1 terabyte of data in one run. Highly accurate corrosion simulations could partially or completely replace the time-consuming, environmentally unfriendly, complicated and expensive experimental corrosion tests. For example, quantum chemical simulations are heavily used to evaluate the molecular structures and electronic properties of corrosion inhibitors5.

If corrosion data is shared, everyone will benefit from the greater understanding that results.