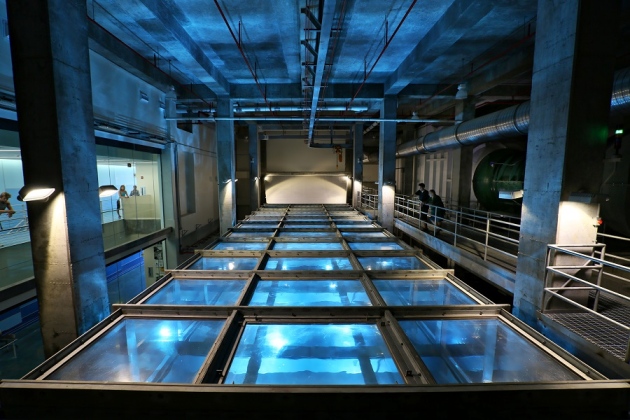 A hurricane simulator at the University of Miami can produce winds of more than 250 kilometres per hour.

On a palm-lined island off the coast of Florida, oceanographers have built a giant indoor tank to simulate the howling winds and crashing waves of the most severe hurricanes — those labelled category 5. It is the world’s largest experiment to understand the physics of devastating tropical storms.

University of Miami researchers began working with the new tank this month. What they learn could help to improve predictions of hurricane strength, as well as which buildings are likely to survive the most powerful waves.

“We wanted to go to the extreme, category-5-equivalent so we can understand what really happens when things start to get interesting,” says Brian Haus, an oceanographer at the University of Miami and director of the new tank, called SUSTAIN (for Surge–Structure–Atmosphere Interaction Facility).

Other wind-wave facilities — including some in Kyoto, Japan; Heidelberg, Germany; and Marseille, France — can simulate what happens during a small hurricane. But the US$15-million SUSTAIN is the only one that can get to the highest possible storm level, category 5, in which winds scream along at at least 252 kilometres an hour.

Hurricane in a tank

At 20 metres long and 6 metres wide, with clear acrylic sides, the tank normally resembles a giant tranquil aquarium. But when Haus flips a switch, paddles begin churning the water and a ventilation fan accelerates the chop. In less than a minute, he has a category-5 hurricane on his hands.

Haus plans to use the tank to study the frothy interface between sea and air. Studies in an earlier, smaller version of SUSTAIN revealed how the frictional drag between wind and water behaves differently at high wind speeds than thought, a discovery that changed hurricane models1. But that tank operated at wind speeds equivalent to only a category-3 storm. It was also long and narrow, only 1 metre wide; SUSTAIN will provide more realistic, 3D data.

Early studies will include how oil spills disperse in the path of a storm, and how strong aquaculture nets have to be to keep their fish corralled as a hurricane passes overhead. Tank operators can also change the water’s temperature and salinity to tackle climate-change questions, such as how much carbon dioxide moves between the ocean and the atmosphere under high winds.

Civil engineers are also likely to stick tiny buildings into SUSTAIN and see how they withstand the pummelling. “We cannot be sitting here and wait for a hurricane,” says Antonio Nanni, a structural engineer at the University of Miami. “We need to simulate these things physically in the laboratory, then feed the data into models and improve building codes or planning codes.” Experiments may put a scaled-down Port of Miami into SUSTAIN to see how wind and waves funnel around islands, buildings and other structures.

Eventually, the data from SUSTAIN should improve models used on the front lines of forecasting hurricane impacts, says Nate Hardin, a meteorologist with NOAA’s National Hurricane Center in Miami. For instance, every year NOAA tweaks the model it uses to predict storm surges, such as those that swamped Galveston, Texas, when Hurricane Ike hit in 2008 as well as the New York area when Hurricane Sandy struck in 2012. As a result, the agency's storm-surge model now incorporates tides.

But it does not yet include the action of waves — such as those studied inside SUSTAIN.