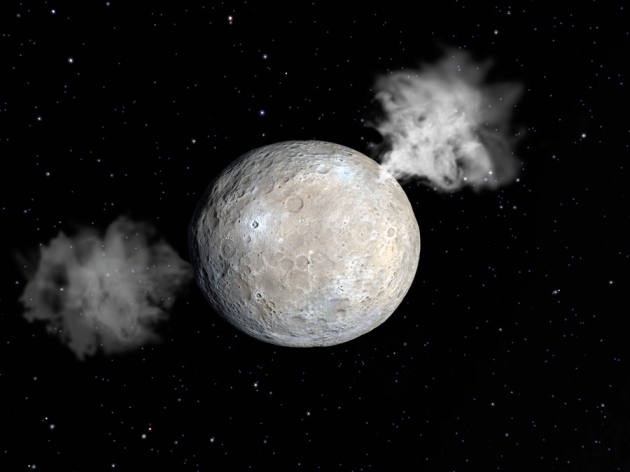 Figure adapted from an illustration by Chris Butler/SPL

An artist's impression of the water vapour that was detected emanating from Ceres, the largest object in the asteroid belt.

Ceres, the largest dwarf planet in the inner Solar System, is spurting water into space. The most likely sources of the sporadic vapour plumes, which astronomers have observed using an orbiting telescope, are two relatively dark areas in the orb’s mid-latitude regions. What triggers the wisps is not yet clear, but a NASA mission scheduled to arrive at Ceres early next year could solve the puzzle — and help to explain how water has been distributed throughout the solar system, including Earth.

Previous studies spotted signs of hydrated minerals on the surface of Ceres1, and traces of neutral hydroxyl (OH, a breakdown product of water) in space around it, says Michael Küppers, a planetary scientist at the European Space Agency (ESA) in Villanueva de la Cañada, Spain. Hydroxyl strongly suggests the presence of water, he notes, but the measurements could not be confirmed during subsequent, more sensitive observations.

The latest data, analysed by Küppers and his colleagues and reported in this week’s Nature2, were gathered by sensors aboard ESA's Earth-orbiting Herschel Space Observatory on four occasions between November 2011 and March 2013. The team found that radiation emitted from or bouncing off Ceres was intermittently absorbed in one particular submillimetre wavelength characteristic of water vapour, says Küppers. The absorption presumably happened when the radiation passed through water plumes emanating from the planet, he says.

Herschel's sensors spied plumes during three of the four observation periods. The strength of absorption varied over a matter of hours, a trend probably caused by relatively small sources of water vapour rotating in and out of view of Earth, the researchers say.

Data gathered in March 2013 suggest that the plumes originated from two widely separated, 60-kilometre-wide spots in the dwarf planet’s mid-latitude regions. Together, these spots ejected about 6 kilograms of water vapour into space each second. Neither ground-based observations nor images from the Hubble Space Telescope are keen enough to identify the as-yet-mysterious areas, says Küppers. “We don’t know what these features are, we just know that they’re darker than their surroundings,” he notes.

“It’s fascinating that these plumes are coming from limited areas,” says Humberto Campins, a planetary scientist at the University of Central Florida in Orlando. One possibility, he notes, is that the vapour comes from cryovolcanoes, which eject ice and volatile substances such as methane. Alternatively, the plumes could have their source in regions unusually rich in water ice; vents or fissures that tap into subsurface reservoirs of water; or impact craters that hold deep ice, which sublimates and jots off into space when it is exposed to solar radiation. “We don’t have enough information to discriminate at this point,” says Campins. But no matter what the source of the vapour is, it must somehow be continuously replenished, he adds.

The origin of the heat that turns the water or ice into vapour is as big a mystery as the source of the water itself. A mechanism called tidal flexing — repeated stretching and squashing of the orb by gravitational forces from a larger body — is thought to generate the heat that drives plumes of water vapour and ice crystals spewing from the icy moons Enceladus (which orbits Saturn)3 and Europa (a companion of Jupiter)4. But that is not likely to be at work on Ceres, because the dwarf planet travels solo in its orbit within the asteroid belt.

One idea, Küppers and his colleagues suggest, is that heat produced by the decay of radioactive elements inside the dwarf planet is fuelling cryovolcanoes or geysers. Another option is that solar radiation is causing near-surface ice to sublimate directly into space, just as it would from the surface of a comet. Either of these sources could produce sporadic activity, Küppers notes.

Also mysterious is why Ceres has a substantially greater abundance of water than Vesta, an asteroid that orbits the sun at approximately the same distance, Campins writes in a related News & Views article. If Vesta and Ceres started out with different amounts of water, that suggests that the asteroids may have originally formed in different parts of the solar system. The same sort of cosmic migrations, Campins notes, could have brought asteroids and comets deep into the solar system, seeding the Earth with water as well as a variety of organic chemicals — and thereby playing a considerable role in the origin and evolution of life.

NASA’s Dawn probe — launched in September 2007 and due to arrive at Ceres early in 2015 — could offer answers to such mysteries. “We don’t really have to guess: in a year we’ll be there,” says Christopher Russell, a planetary scientist at the University of California, Los Angeles, and lead investigator for the mission. As well as taking high-resolution images of Ceres, Dawn’s sensors will help to map various minerals on its surface.

“Once we get there, we’ll figure out where [the water] is getting out, and how,” says Russell.