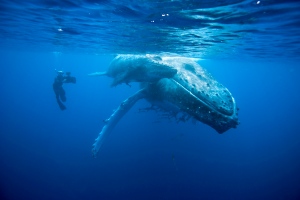 Large animals such as humpback whales may have evolved cancer-fighting mechanisms that smaller animals lack — but one flip-side could be lower rates of reproduction.

If every living cell had an equal chance of becoming cancerous, whales and elephants should have a greater risk of developing cancer than do humans or mice. But across species, the occurrence of cancer does not show a correlation with body mass. According to a new model, the paradox could be explained if animals were striking a balance between reducing cancer risk and other priorities, such as maximising the number of offspring.

The lack of correlation between body mass and cancer risk is known as Peto’s paradox, after epidemiologist Richard Peto of Oxford University in the UK, who noted it in the 1970s. Evolutionary biologists think that it results from larger animals using protective mechanisms that many smaller animals do not1.

In an attempt to identify how greater body mass might foster such mechanisms, evolutionary biologist Benjamin Roche at the Institute of Research for Development in Montpellier, France, and his colleagues created a theoretical model to simulate which of 100 possible genetic-mutation strategies would become most prevalent over 4,000 generations.

“We found that tumour-suppressor genes and proto-oncogenes react differently along a gradient of body masses,” says Roche. “Their evolutionary dynamics are linked.” Proto-oncogene activation decreased steadily with increasing body mass, the team found.

In their model, evolution did not always favour tumour-suppressor genes. Although these mechanisms could reduce cancer mortality in any animal, they may come at a cost — reduced fertility, in the case of the team's model. The result was that for intermediate-sized animals, the evolutionary cost of having many tumour suppressor genes was greater than the benefits of cancer protection they offered.

As a consequence, mutations would arise to keep tumour-suppressors in check. “At this point, it is better for the population, evolutionarily, to tolerate more deaths from cancer rather than investing in more costly mechanisms to avoid cancer development,” says Roche.

The results, published in a special issue of Evolutionary Applications focused on cancer biology2, could explain why, for example, the incidence of cancer in humans stands at one in three, whereas it is only 18% in beluga whales3.

Roche and colleagues' is not the only proposed explanation for Peto’s paradox. “There are a number of different hypotheses,” says Carlo Maley, director of the Center for Evolution and Cancer at the University of California, San Francisco. “For example, rather than body mass influencing the number of tumour suppressors and oncogenes, maybe there are less reactive oxygen species in larger organisms due to their lower metabolic rate."

Maley and his colleagues are sequencing the humpback whale genome, which they plan to compare with others, including the elephant genome, to determine which hypotheses might be valid — and whether nature has already come up with cancer-prevention mechanisms that could be translated to the clinic.

Still, some biologists question whether there is a paradox at all, saying that variations in cancer rates across species — which range between 20% and 46% — are more similar than different. “All species get cancer at about the same rate, typically in the latter part of life span,” says James DeGregori, a molecular biologist at the University of Colorado in Denver. “We simply don’t have the data yet to back up the notion that larger animals have come up with a way to avoid oncogenic mutations.”