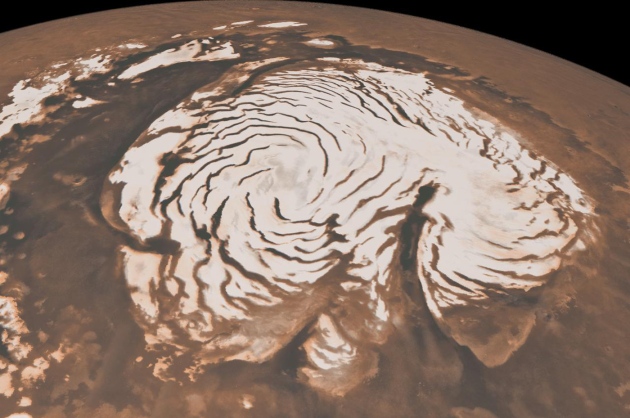 Snow on Mars seems to have a much more exciting night life than researchers previously thought.

When night arrives on Mars, plunging temperatures can lead to weather much worse than researchers previously thought was possible on the Red Planet. Snowstorms can spring up with whipping winds that could create problems for missions to the planet, according to a new study.

The analysis upends researchers’ previous assumptions that Martian snow falls slowly and gently from the sky. Getting a handle on the planet’s weather is important for future exploratory missions. But it could also help to explain how Mars lost a lot of its water, and what might happen to the water that remains. The study, published on 21 August in Nature Geoscience1, moves researchers closer to an answer by providing the first detailed peek into what happens to the water in the Red Planet’s clouds.

The new work combined three widely used computer models which enabled the team to simulate large-scale global climates, calculate air turbulence and even make localized weather predictions for Mars. Previously, researchers used only one model at a time. When scientists used only a global climate model, they could predict where clouds might be, but they didn't have any idea about the dynamics within a cloud, says Aymeric Spiga, a planetary scientist at Pierre and Marie Curie University in Paris and lead study author. “That’s the reason why these snowstorms were not discovered before.”

Snow is nothing new for the Red Planet — there are ice caps at its poles. But the signficance of clouds in Martian weather, including snowfalls, has flown under the radar until now. Using multiple models is a clever way to simulate weather on Mars, says Paul Hayne, a planetary scientist at NASA’s Jet Propulsion Laboratory in Pasadena, California, who was not involved with the study. “It’s a bit like a Russian doll, with each successively higher-resolution model fitting inside the other,” he says.

During the day, icy clouds about 10–20 kilometres above the planet's surface absorb sunlight and help to keep the atmosphere warm and stable. But Spiga and his colleagues found that when the sun sets, the temperature inside the clouds cools rapidly, dipping 4 degrees Kelvin per hour.

Their models showed that cold, descending air masses mix with hot air rising from the surface. By about 2 a.m. local time, powerful columns of rushing wind reach speeds of 10 metres per second. The descending winds bring snow-like ice particles with them.

Previous data from NASA's Phoenix Lander first spotted what looked like falling snow near the Red Planet's poles in 2008. Researchers estimated that the icy particles took 4 hours to fall 1–2 kilometres before dissipating into the atmosphere. But Spiga and his colleagues found that these miniscule icy particles — about one-thousandth the size of a raindrop — only take 5–10 minutes to fall 1–2 kilometres.

The researchers’ simulations also revealed some upward release of water vapour in the clouds near the planet’s poles. However, the team notes that they don't know whether atmospheric mixing patterns favour a net movement of water higher into Mars’ atmosphere — where it could potentially be lost to space — or down towards the surface.

If this relatively low-level atmospheric mixing pushes water higher up into the atmosphere, that could explain how the Red Planet lost a lot of its water, says Mike Chaffin, a planetary scientist at the University of Colorado Boulder who studies Mars’ upper atmosphere.

“More and more, we’re understanding that the Mars atmosphere is connected vertically in ways we didn’t expect,” Chaffin says.

Understanding the dynamics of the planet’s atmosphere will help to eliminate surprises for future missions to Mars. Alhough the wind speeds in these snowstorms would be considered moderate on Earth — they wouldn’t be strong enough to ground a commercial flight — the Red Planet's thinner atmosphere would amplify wind turbulence, Spiga says.

That could raise problems for a robotic rover or a human crew as they tried to land on Mars and carry out a mission on the surface. “Any time NASA sends a new lander or rover to Mars, the landing of these spacecraft is always a very risky process,” says Spiga.