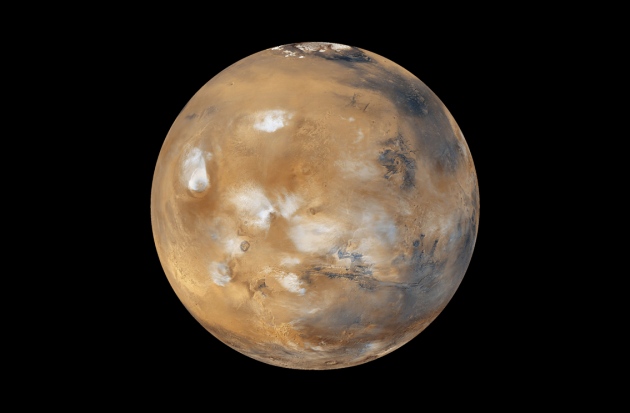 A mysterious plume that appeared on Mars in 2012 is testing scientists’ understanding of the Martian atmosphere.

Amateur astronomers spotted the bizarre feature rising off the edge of the red planet in March and April of 2012. It looked like a puff of dust coming off the surface, but it measured some 200 to 250 kilometres high. That is much higher than would be expected from the lower-altitude dust storms that rage across the planet. 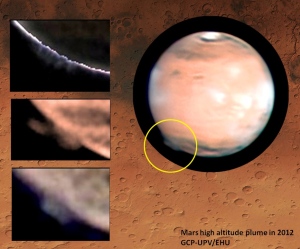 A mysterious Martian plume (circled) and its changing shape (left) captured on 21 March 2012.

Now a team of astronomers proposes that the plume was either a cloud of ice particles or a Martian aurora. But neither possibility fully explains the plume — raising new questions about the state of the Martian atmosphere. The study, led by astronomer Agustín Sánchez-Lavega of the University of the Basque Country in Bilbao, Spain, is published on 16 February in Nature1.

“This observation is a big surprise,” says Aymeric Spiga, a planetary scientist at the University of Pierre and Marie Curie in Paris, who was not involved in the work. “Another puzzle on Mars!”

The plume first appeared on 12 March 2012 as a small bump on the dawn side of Mars’s southern hemisphere. It changed shape over the next 11 days, morphing from blobs to pillars and other forms. Within weeks another plume appeared, this one also lasting about a week and a half.

The plumes' sheer height is the hard thing to explain. To find an answer, Sánchez-Lavega’s team coordinated observations from amateur astronomers, and searched imagery from Mars spacecraft.

The simplest explanation is that the dust storms that frequently whirl across Mars might have kicked dust up to high altitudes. But dust has not been seen at altitudes higher than about 50 kilometres in the Martian atmosphere. And even that requires unusual weather conditions to funnel dust upwards, in an event that Spiga dubbed 'rocket dust storms' in a 2013 paper2.

A more plausible explanation is that the plumes were formed by shards of frozen carbon dioxide or water vapour, says Sánchez-Lavega. But their existence would require the atmosphere to be much colder than models predict for that altitude.

Alternatively, the plume could have been an aurora — an interaction between charged particles from the Sun and a planet’s magnetic field — which are known to occur on Mars3. But there is not much supporting evidence for the aurora idea, says Nicholas Heavens, a planetary astronomer at Hampton University in Virginia. “The ice plume is a little more reasonable,” he says.

Sánchez-Lavega and his colleagues are still working to resolve the mystery. NASA's MAVEN spacecraft, one of the flotilla of US and Indian probes currently orbiting Mars, would be able to see a plume if it happened to be looking at the right place at the right time — but has not seen anything like it yet. And amateur astronomers watched Mars closely in April 2014, when the planet was last closest to Earth and saw no high-altitude plumes. The next such opportunity comes in 2016.