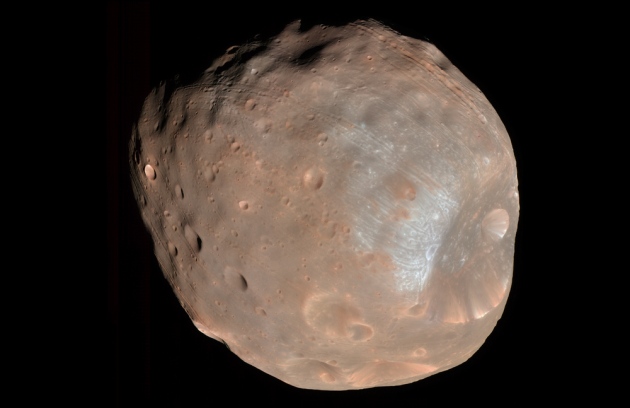 One day, Mars may have rings like Saturn does. The martian moon Phobos, which is spiralling inexorably closer towards the red planet, will disintegrate to form a ring system some 20 million to 40 million years from now, according to calculations published on 23 November. Other research suggests that long grooves on Phobos's surface may represent the first stages of that inevitable crack-up.

Phobos may not be alone in its doom. Researchers have speculated that Neptune’s moon Triton might also be falling apart. And other, now-vanished moons elsewhere in the Solar System may have suffered a similar fate in the distant past, migrating towards their planet and shredding into a ring system before vanishing. Saturn's iconic rings may have formed in this way too.

Death of a moon

Watching Phobos in the first stages of its death throes is a rare chance for scientists to witness a process that could have been widespread in the early Solar System, says Benjamin Black, a planetary scientist at the University of California, Berkeley. He and his Berkeley colleague Tushar Mittal published the ring-system paper on 23 November in Nature Geoscience1.

By nearly any measure, Phobos is a bizarre place. It is tiny, measuring 22 kilometres across, and close to its planet — just 6,000 kilometres above the surface. Each year, Mars’s gravity pulls Phobos several centimetres closer, and scientists have long known that the moon would either plummet to its death intact or shred into a ring system before its doom.

To predict how Phobos’s death might unfold, Black and Mittal took information such as the density and strength of Phobos and compared it to a model used to estimate rock strength. They calculated that the weakest parts of Phobos would begin to spread out and form a ring about 20 million years from now.

The break-up itself would happen quickly, perhaps taking only days to weeks. “If you were standing on the surface of Mars, you could grab a lawn chair and watch Phobos shearing out and spreading into a big circle,” Black says. Because smaller particles can stay aloft longer than larger ones, the ring would last some 1 million to 100 million years before finally descending to the surface, he and Mittal calculate.

A second unpublished study explores how Mars’s gravitational pull is already stressing Phobos. The kilometres-long grooves that scar the moon are like stretch marks reflecting the orientations of tidal stresses that are tugging Phobos to pieces, researchers concluded after analysing the marks. “The grooves on the surface are likely the first signs of tidal failure,” says Terry Hurford, a planetary scientist at NASA’s Goddard Space Flight Center in Greenbelt, Maryland. He presented the work this month at a planetary science conference in National Harbor, Maryland. (Deimos, Mars's other moon, is too far away from the planet to be subject to the same stresses, so won't break up anytime soon).

A future spacecraft to Phobos could measure its internal strength and provide more insight into exactly how and when it will break up, Black says. A Russian probe that would have explored Phobos fell back to Earth in 2012, months after a launch failure left it in Earth orbit instead of on its way to Mars.

Phobos and Deimos may be the last of possibly hundreds of small objects that spiraled into the planet over time, says Erik Asphaug, a planetary scientist at Arizona State University in Tempe. That means the Martian surface could be pockmarked with craters formed in their last moments.

Mittal says he and Black will be looking for signs of these now-dead moons.