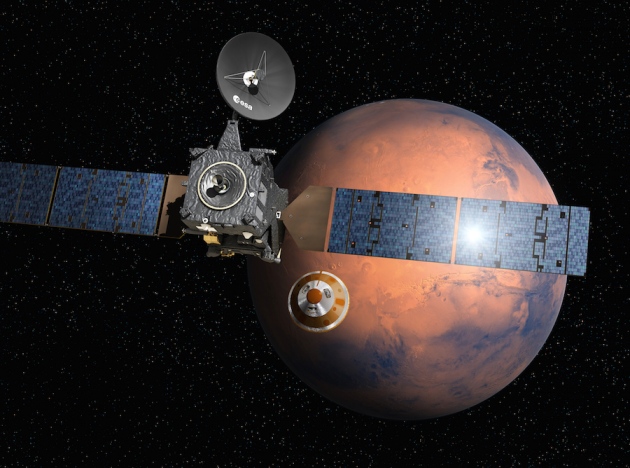 ExoMars's Trace Gas Orbiter will analyse the Martian atmosphere; its Schiaparelli lander module will descend to the surface (artist's illustration).

Neither Europe nor Russia has ever successfully operated a mission on Mars’s surface. Now the European Space Agency (ESA) and its Russian counterpart Roscosmos hope to mark a first for both organizations, with a joint mission that launched from the Baikonur Cosmodrome in Kazakhstan on 14 March.

Known as ExoMars 2016, it consists of a lander that will study the planet’s dust storms, and an orbiter that will analyse its atmosphere, including looking for methane. The orbiter will also act as a relay for a follow-up Mars rover, due to be launched in 2018. Each phase of the mission will be a test of the growing collaboration between the two space agencies, which have hinted at future joint missions, including teaming up for uncrewed and crewed Moon trips.

ESA designed the orbiter and lander projects but a Russian rocket launched them and they carry Russian instruments. “The launch is crucial because it’s symbolic,” says Oleg Korablev of the Space Research Institute, Moscow, who is principal investigator for the Atmospheric Chemistry Suite on the orbiter. "It's psychologically very important."

ESA project scientist Jorge Vago adds: “Hopefully this will cement a way of doing things that becomes the modus operandi for when we do missions together.” Based at the European Space Research and Technology Centre in Noordwijk, the Netherlands, Vago also works on the ExoMars 2018 mission, which will be a joint operation that integrates the teams more tightly.

A Russian Proton rocket launched the ExoMars 2016 craft — at 4,332 kilograms, the heaviest Mars mission ever to take to the skies. There will now be four rocket burns over 10 hours before the spacecraft begins its trajectory towards Mars. A favourable alignment between Earth and the red planet means that ExoMars should reach its Martian orbit after 7 months; the orbiter and landing module, known as Schiaparelli, will separate three days before reaching the Martian atmosphere.

The landing won’t involve anything as complex as NASA’s sky crane, which delivered the Curiosity rover to Mars in 2012 during the Mars Science Laboratory (MSL) mission. But it is ambitious, says Vago, and designed to show that Europe has the know-how to make a controlled landing on Mars. Taking into account lessons learned from Beagle 2 (Britain's failed 2003 Mars lander that was operated by ESA), the module will first use drag from the Martian atmosphere to brake, then open a parachute and eventually fire its thrusters. During the last 2 metres of its descent, travelling at a relatively sedate 10 kilometres an hour, Schiaparelli will deploy a honeycomb-like crash pad and come to rest on the surface.

The first lander to set down during dust-storm season, Schiaparelli will monitor pressure and temperature and image the approaching landing site during its descent. On the ground, the conical lander has just 2–4 days of battery power to perform experiments.

Its tiny meteorological station DREAMS (Dust Characterisation, Risk Assessment, and Environment Analyser on the Martian Surface) will measure pressure, humidity, temperature, wind speed and direction. This represents a unique chance to study dust circulation and hopefully unravel the mystery of why some storms on Mars go planet-wide, says Francesca Esposito at the INAF Astronomical Observatory of Capdiomonte in Naples, Italy, and the principal investigator for DREAMS. The Schiaparelli lander will also be the first to examine the planet’s electric field. Those data will feed into Martian climate models and could allow scientists to better predict future disturbances to communications on the planet, she says.

The higher-profile science — including investigating hints of Martian biology — will take place in the sky on board ExoMars’ Trace Gas Orbiter (TGO). That phase will begin at the end of 2017, once the craft has manoeuvred into a circular, 400-kilometre-high orbit.

While studying Mars’s atmosphere, the TGO’s major task will be to follow up on evidence that the red planet contains methane, which has been associated with active geological processes, as well as biological ones. “Is there a seasonality to the methane, or are the concentrations associated with particular types of terrain, for instance?” asks John Bridges, a planetary scientist at the University of Leicester, UK, who works on the TGO’s stereo camera. The camera will use 3D images to chart geological features, and a hydrogen detector will map the planet’s subsurface water.

The orbiter will also serve as a communications platform, including for ExoMars’s future rover, which will break new ground — literally. Armed with a drill, the rover will bore up to 2 metres into the planetary surface, where scientists hope that organic matter, which can be destroyed by surface radiation, may lie preserved.

The rover will require the European and Russian teams to work together to an extent unprecedented for ESA, says Vago. In the 2016 mission, the responsibilities of the two teams are relatively separate, but in the 2018 mission, he says, “there is no clean line between them”. As a result, each design tweak ripples through the work of both teams. 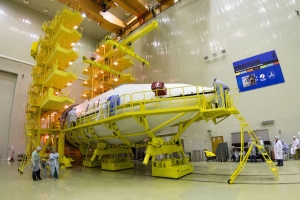 The ExoMars 2016 spacecraft is prepared for launch earlier this month.

It is a new experience for Russia too, says Korablev, even though the country has long contributed scientific instruments to foreign space missions. “There are many problems, but there are always problems on national projects too,” he says. “So I would say it was fine — slower, but not that much slower.”

This complexity, coupled with late-running instruments, delays in testing and a lack of cash, means that the 2018 rover mission could be delayed until 2020, says Vago. ESA’s director-general, Johann-Dietrich Wörner, said in January that the 2018 mission needed more funding to meet its launch target, and the agency is expected to ask member states for the missing few hundred million euros at a meeting in December. Success with ExoMars 2016 could help to persuade European leaders to contribute, but Bridges says that most scientists will accept a delay as long as it means that all the instruments are on the craft and working.

For now, the teams are focused on the complex launch and on the rocket’s separation from the spacecraft. “We will be biting our nails all day on the 14th until we have successful separation,” says Vago.

Korablev’s involvement with Mars missions has been an emotional rollercoaster. He spent 10 years working on Russia’s Mars 96 orbiter, which in 1996 failed to leave near-Earth orbit. He faced disappointment again when a sample-return mission to the Martian moon Phobos ran into problems, eventually crashing in the Pacific Ocean in 2012. “We put a great effort into ExoMars,” he says. “I almost don’t dare to say any words.”

An earlier version of the graphic accidentally showed the wrong flag for Russia. This has now been corrected.

This story has updated since it was first published to reflect the launch of ExoMars 2016.