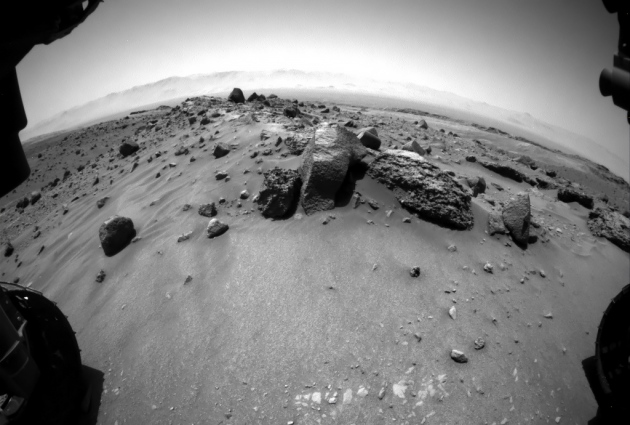 View from the Mars rover Curiosity at the foot of Aeolis Mons, before the rover starts to climb the mountain.

Four years into its travels across Mars, NASA’s Curiosity rover faces an un­expected challenge: wending its way safely among dozens of dark streaks that could indicate water seeping from the red planet’s hillsides.

Although scientists might love to investigate the streaks at close range, strict international rules prohibit Curiosity from touching any part of Mars that could host liquid water, to prevent contamination. But as the rover begins climbing the mountain Aeolis Mons next month, it will probably pass within a few kilometres of a dark streak that grew and shifted between February and July 2012 in ways suggestive of flowing water.

NASA officials are trying to determine whether Earth microbes aboard Curiosity could contaminate the potential Martian seeps from a distance. If the risk is too high, NASA could shift the rover’s course — but that would present a daunting geographical challenge. There is only one obvious path to the ancient geological formations that Curiosity scientists have been yearning to sample for years (see ‘All wet?’).

“We’re very excited to get up to these layers and find the 3-billion-year-old water,” says Ashwin Vasavada, Curiosity’s project scientist at NASA’s Jet Propulsion Laboratory (JPL) in Pasadena, California. “Not the ten-day-old water.”

The streaks — dubbed recurring slope lineae (RSLs) because they appear, fade away and re­appear seasonally on steep slopes — were first reported1 on Mars five years ago in a handful of places. The total count is now up to 452 possible RSLs. More than half of those are in the enormous equatorial canyon of Valles Marineris, but they also appear at other latitudes and longitudes. “We’re just finding them all over the place,” says David Stillman, a planetary scientist at the Southwest Research Institute in Boulder, Colorado, who leads the cataloguing.

RSLs typically measure a few metres across and hundreds of metres long. One leading idea is that they form when the chilly Martian surface warms just enough to thaw an ice dam in the soil, allowing water to begin seeping downhill. When temperatures drop, the water freezes and the hillside lightens again until next season. But the picture is complicated by factors such as potential salt in the water; brines may seep at lower temperatures than fresher water2.

Other possible explanations for the streaks include water condensing from the atmosphere, or the flow of bone-dry debris. “They have a lot of behaviours that resemble liquid water,” says Colin Dundas, a planetary geologist at the US Geological Survey in Flagstaff, Arizona. “But Mars is a strange place, and it’s worth considering the possibility there are dry processes that could surprise us.” 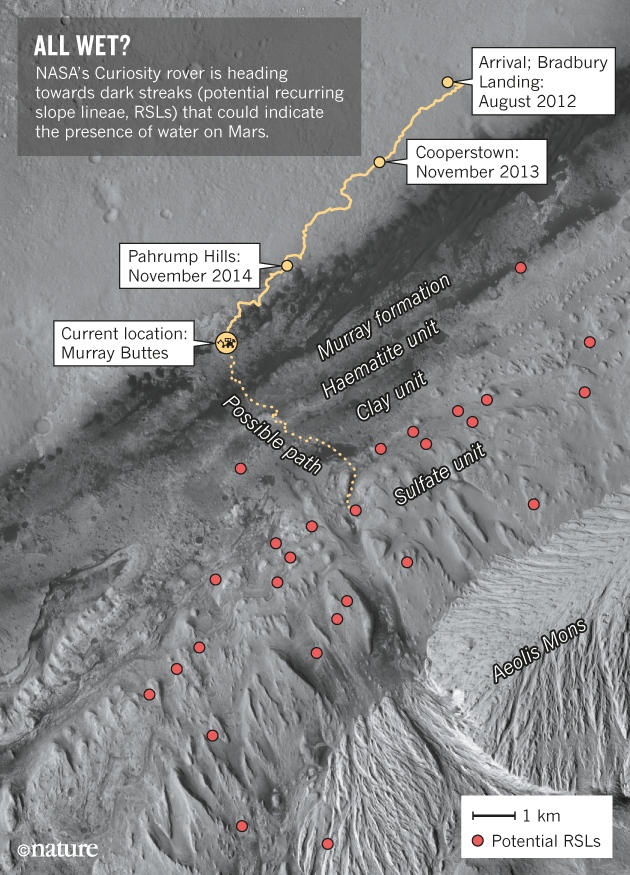 A study published last month used orbital infrared data to suggest that typical RSLs contain no more than 3% water3. And other streaky-slope Martian features, known as gullies, were initially thought to be caused by liquid water but are now thought to be formed mostly by carbon dioxide frost.

Dundas and his colleagues have counted 58 possible RSLs near Curiosity’s landing site in Gale Crater4. Many of them appeared after a planet-wide dust storm in 2007 — possibly because the dust acted as a greenhouse and temporarily warmed the surface, Stillman says.

Since January, mission scientists have used the ChemCam instrument aboard the rover — which includes a small telescope — to photograph nearby streaks whenever possible.

So far, the rover has taken pictures of 8 of the 58 locations and seen no changes. The features are lines on slopes, but they have not yet recurred. “We’ve got two of the three letters in the acronym,” says Ryan Anderson, a geologist at the US Geological Survey who leads the imaging campaign.

Curiosity is currently about 5 kilometres away from the potential RSLs; on its current projected path, it would never get any closer than about 2 kilometres, Vasavada says. The rover could not physically drive up and touch the streaks if it wanted to, because it cannot navigate the slopes of 25 degrees or greater on which they appear.

But the rover’s sheer unexpected proximity to potential RSLs has NASA re-evaluating its planetary-protection protocols. Curiosity was only partly sterilized before going to Mars, and experts at JPL and NASA headquarters in Washington DC are calculating how long the remaining microbes could survive in Mars’s harsh atmosphere — as well as what weather conditions could transport them several kilometres away and possibly contaminate a water seep. “That hasn’t been well quantified for any mission,” says Vasavada.

The work is an early test for the NASA Mars rover slated to launch in 2020, which will look for life and collect and stash samples for possible return to Earth. RSLs exist at several of the rover’s eight possible landing sites.

For now, Curiosity is finishing exploring the Murray formation. This area is made of sediments from the bottom of ancient lakes — the sort of potentially life-supporting environment the rover was sent to find. Curiosity’s second extended mission begins on 1 October.

Barring disaster, the rover’s lifespan will be set by its nuclear-power source, which will continue to dwindle in coming years through radioactive decay. Curiosity still has kilometres to scale on Aeolis Mons as it moves towards its final destination, a sulfate-rich group of rocks.

This story originally did not make it clear that the dark streaks near Curiosity are only ‘potential’ recurring slope lineae. In addition, it should have said that the Murray formation — not the Murray Buttes — was formed from ancient lake sediments. The article has now been updated.