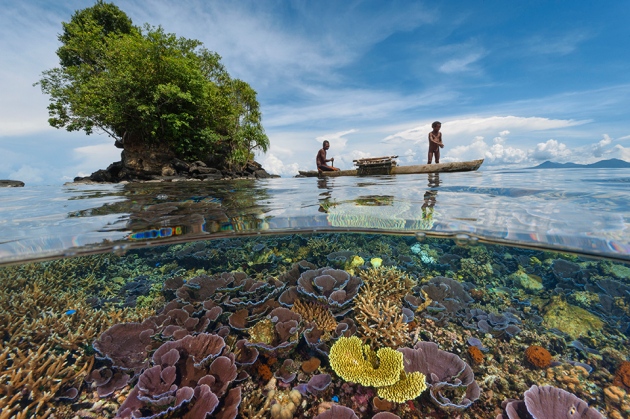 The health of coral reefs is normally assessed by scuba surveys and other close-up views.

Eric Hochberg has studied coral reefs for two decades, but the marine ecologist is about to see them in a fresh light. Beginning on 6 June, Hochberg and his colleagues will use a specially outfitted NASA aeroplane to map the spectra of sunlight reflecting off reefs spread across the Pacific Ocean far below. The scientists aim to tease out the spectral signatures of coral, algae and sand — and to check the health of the reefs.

The three-year, US$15-million Coral Reef Airborne Laboratory (CORAL) project will be the biggest and most detailed study yet of entire reefs, rather than just the small patches that scuba divers can reach. CORAL is part of a growing push to map reefs faster, and in more detail, than ever before. Marine scientists are putting new instruments onto planes, satellites and even drones to gain a broader perspective on how well corals are doing — or not.

After its surveys in Hawaii, Australia’s Great Barrier Reef, the Mariana Islands and Palau (see ‘Under the sea’), CORAL will have mapped about 3–4% of the world’s reef area, hundreds of times more than previous scuba surveys.

Warming ocean waters have led to massive coral-bleaching events such as the one now devastating the Great Barrier Reef. The CORAL scientists hope to learn how individual reefs respond to such threats. “We want to start looking at things at the ecosystem scale, which is really hard to do in the water,” says Hochberg, at the Bermuda Institute of Ocean Sciences in St George’s.

Remote sensing of coral reefs is hard because the oceans reflect so much less light than the land, says Heidi Dierssen, a marine ecologist at the University of Connecticut Avery Point in Groton, who is part of the CORAL team. And scientists have to do elaborate calculations to correct for the distortion of light on its journey through the atmosphere and through water — a bright, deep ocean bottom and a dark, shallow bottom can both look the same to a remote-sensing camera.

Teasing out such distinctions requires scanning an area using as many wavelength bands as possible. “When you have the full spectrum, you can say so much more about what is there,” Dierssen says. 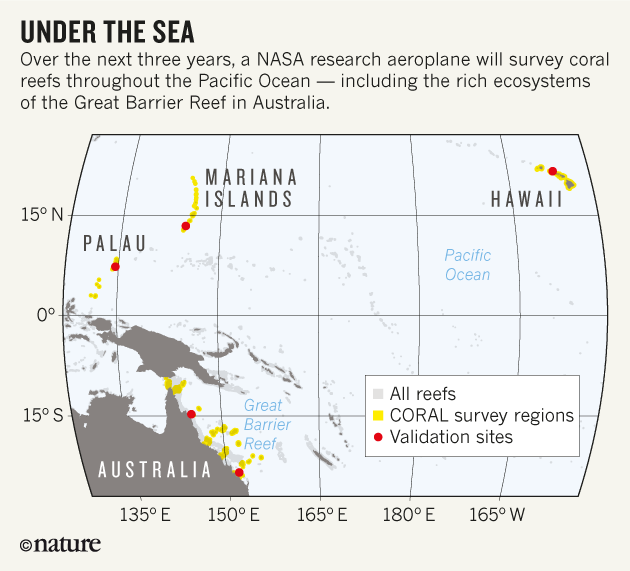 One of the latest views from above comes from the Sentinel-2 satellite, launched by the European Space Agency in June 2015. Although the satellite was not designed to study reefs, it has relatively sharp vision and can operate over more and narrower spectral bands than the US Geological Survey’s Landsat-8 satellite, another workhorse of Earth observing. And unlike data from keen-eyed commercial satellites, Sentinel’s observations are free to use.

Sentinel-2 will also eventually revisit the same spot every 5 days, compared with Landsat-8’s 16-day return period. That makes it a better choice for studying short-term marine phenomena such as coral bleaching and algal blooms, says John Hedley, a remote-sensing expert at Environmental Computer Science in Tiverton, UK, who is on the science team for the Sentinel-2 coral study, Sen2Coral.

Team members are set to report early results on mapping reef bottoms at a coral-reef symposium in Honolulu, Hawaii, on 22 June.

But in the wavelength range applicable to underwater sensing — 430–710 nanometres — Sentinel-2 cannot capture details that CORAL’s plane can. The plane carries an instrument that gathers data in more than 100 narrow spectral bands in that range, including the signature of photosynthetic organisms within the living coral itself at 570–575 nanometres.

CORAL will focus on one simple metric: how much coral cover there is on a given reef, as opposed to algae and sand. From that, researchers can calculate how well the coral is doing at transforming sunlight into energy to maintain a reef structure. Hochberg and his colleagues hope to use that information to better understand how local changes, such as an increase in pollution, might affect coral’s health.

The June flights in Hawaii will test whether all the equipment is working. From there, the Gulfstream IV plane will go to the Great Barrier Reef in September and October, followed by Hawaii, the Mariana Islands and Palau in 2017. Divers will simultaneously measure the optical properties of the surrounding seawater and the reef condition up close, to cross-check what the plane sees from 8,500 metres above.

The flights will provide a snapshot of some of the world’s most important reefs, says Serge Andréfouët, a marine ecologist at the Research Institute for Development (IRD) in Nouméa, New Caledonia, who led an earlier coral-mapping effort with the Landsat-7 satellite.

But CORAL will be a one-time glimpse only. With limited funding, there are no plans to repeat any flights to see how the reefs change over time, Hochberg says.

Instead, the team hopes to provide a rich set of baseline data for future coral studies. “You have to pick and choose where you go to try to understand how the ecosystem is working,” he says.